It was an extreme year. 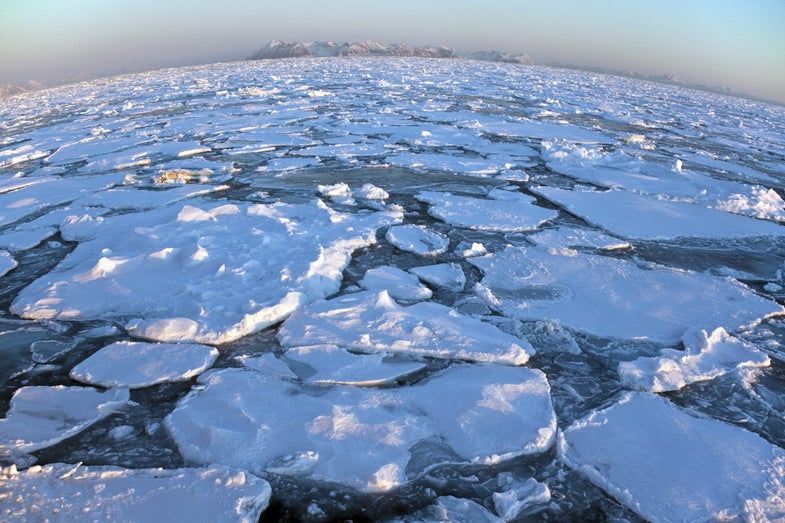 In some regions, this was the first time in 37 years of water surveys that there was no cold pool. DepositPhotos
SHARE

By all measures, 2018 was an extreme year for Alaska’s Bering Sea. For the first time since 1850, the body of water in the northern Pacific remained virtually free of sea ice. Scientists traced the impact of this lack of ice on water temperature and fish populations throughout the year to try to figure out what happens when an ecosystem built around ice suddenly has none.

“Last year, or last winter, we had by far the lowest sea ice extent by any measure in the Bering Sea,” says Rick Thoman, who recently retired from studying weather and climate for the National Oceanic and Atmospheric Administration and currently works for the Alaska Center for Climate Assessment and Policy at the University of Alaska Fairbanks. From when reconstructed sea ice records begin in 1850 until now, this year was the lowest of the low in terms of sea ice, and “not by a little bit, by a tremendous amount.”

The Bering Sea sits in the northern Pacific ocean, just below the Arctic. It stretches west from Alaska over to Russia, framed by the Alaskan Peninsula to the south and the Bering Strait to the north. In a normal year more than 500,000 square kilometers of ice will form from the Bering Strait down past St. Matthew’s Island, said Walter Meier, a scientist at the National Snow and Ice Data Center, in a NASA post. “That’s about two Texas’s worth of ice that is missing this year.”

What little ice did form melted by early May. That’s not because Alaska had a particularly warm spring and summer, says Thoman. It could be partly due to the extremely stormy fall Alaska had in 2017 that prevented the early formation of ice. But it could also be the result of warm, low ice years in 2016 and 2017, and a warm 2018 winter, says Thoman. “What we see culminating this summer may have been several years in the making,” he says, the result of heat stored in the oceans during the last couple of warm years. It’s a “nice example of one of those positive feedback loops. Low ice begets low ice.”

The early melt time gave the water plenty of time to heat up in the sun-filled days of May and June leading up to the longest day of the year, Thoman says. Earlier this fall, sea surface temperatures in the Bering Sea (and the Chukchi Sea to its north) were 5°C above normal, says Thoman. That may not sound significant, says Thoman, but for the ocean, that’s “quite a lot.”

But the impacts of the missing sea ice go much deeper. Literally.

A layer of super cold water, called a cold pool, normally spreads across the bottom of the Bering Sea Shelf from the Gulf of Anadyr on the Russian side of the Bering Sea and extending southeast into U.S. waters. In a good year, the cold pool can extend all the way south to the Alaskan Peninsula and east into Bristol Bay. Because the cold pool forms with sea ice, its size varies year to year with sea ice extent. As the water on top of the sea freezes, the salt in the water falls out, forming an extremely salty layer. This water is so dense it sinks to the bottom of the sea, and is so salt-filled it can reach subzero temperatures without freezing. The cold pool is defined as water below 2°C, and below around 1°C the water provides a barrier to fish like pollock and Pacific Cod, which don’t metabolize well in extreme cold.

This year, cold pool reached historic lows, clinging to the far northern area of the Bering Sea, says Phyllis Stabeno, a physical oceanographer with NOAA. Stabeno and her colleagues found water was cold enough to technically qualify as a cold pool at two of their northernmost monitoring stations, but the water at both stations was several degrees warmer than it would normally be at that time of year. And 200 kilometers south of these stations, she found no cold pool at all.

In some regions, this was the first time in 37 years of water surveys that there was no cold pool, says Lyle Britt, a scientist with NOAA Fisheries.

The cold pool normally determines where you can find different species of fish in the Bering Sea by providing a barrier of cold water for fish like pollock and pacific cod, that stay concentrated on the western edge of the sea shelf instead of moving east and north. It also provides a haven for species like arctic cod and arctic snow crab, which love the cold, briny water. The cold pool is also associated with nutrient rich conditions, which means it is good for phytoplankton that help form the bottom of the Bering Sea food chain.

Britt and his team survey the southern Bering Sea systematically every year, hauling up nets of fish to analyze the size, weight, number of different species, what the fish have in their stomachs and more. Unfortunately, due to budget and time constraints, the northern Bering Sea, which is currently experiencing all this change, has been studied far less than the south. The first time NOAA did a complete survey of the north was in 2010. They couldn’t get funding again for a full northern survey until 2017.

This year, given the unusual conditions, Britt and his coworkers cobbled together the funds to do a quick survey. While the results cannot be compared apples-to-apples to the surveys from 2017 and 2010, it does provide a snapshot estimate of what the fish were doing this year.

“We saw a lot of changes of fish distribution,” says Britt.

NOAA measures species abundance by calculating “total biomass,” using how many fish of a particular species they caught and the weight of the samples to estimate the mass of all fishes in the region. In 2010, a year with a larger cold pool than normal, the total biomass for walleye pollock was 34,000 metric tons. In 2017, a warm year similar to 2018, the number jumped up to 1.3 million metric tons. This year, the partial survey found similar numbers of pollock, at 1.1 million metric tons.

You can’t draw hard conclusions from just two data points, says Lyle. And it’s unclear what migrating species and an unusually warm year like this means for people who rely on fishing for their livelihood. Alaska pollock, for example, is one of the largest and most important commercial fisheries in the world. Most of the fish sticks and fillets in your supermarket probably come from here, according to NOAA.

But commercial fish moving into new areas won’t necessarily benefit the people living in those areas, says Britt, because the communities in the northern Bering Sea aren’t currently equipped to take advantage of that resource. And since it’s not clear if this trend will last, it doesn’t make sense for the people in these communities to invest in the resources needed to tap into that rich Alaskan fishery.

Northern Bering Sea communities still caught plenty of the fish they normally look for. “2018 was a pretty good year for salmon, trout, saffron cod, red king crab, herring and what not,” said Brandon Ahmasuk, subsistence resources program director for Kawerak, Inc., an association of native villages in the Bering Sea region. These northern communities are on the frontlines of climate change. Other resources they depend on have already shifted—certain species of seal were harder to find this year, according to marine mammal researcher Peter Boveng, and struggling bird colonies provided fewer eggs to subsistence gatherers.

Britt says they can’t know what the fish distribution will look like next year, or whether a warm year like this one will influence future reproductive prowess. Why are all the fish moving north with the lifting of the sea ice and cold pool? It’s too soon to say.

By running the numbers on the models he and other scientists use to track warm water events in Alaska, Rick Thoman says it is highly unlikely the Bering Sea would have experienced this wild lack of ice—and these warm conditions—without help from human-induced climate change. It’s harder to see than a massive hurricane or a wildfire, but it’s an indication of how even the baseline ecosystems—ones we don’t even realize we depend on—are experiencing unprecedented changes.

“I would call this an extreme climate event,” says Thoman.