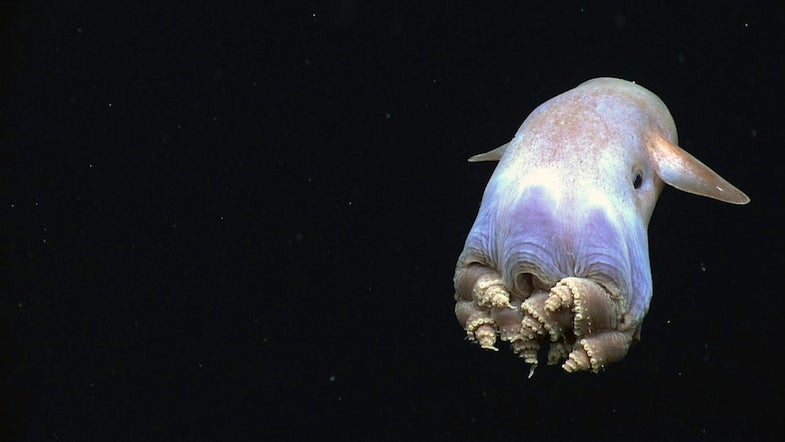 During a recent expedition to the ocean floor, scientists photographed a dumbo octopus swimming with coiled tentacles, a posture that has never before been witnessed by humans. NOAA Okeanos Explorer Program, Gulf of Mexico 2014 Expedition
SHARE

For the past three weeks, we’ve been following an incredible livestream of the bottom of the Gulf of Mexico, filmed from a submersible operated by researchers aboard the Okeanos Explorer.

The expedition, led by the National Oceanic and Atmospheric Administration, ended this week. Using the sub’s high-def camera, the scientists captured footage of parts of the ocean floor never before seen by humans, including ancient shipwrecks, unidentified species, and rare geology.

We’ll have much more coverage of this expedition next week, so stay tuned. (Update 5/9/2014: See our favorite moments from the expedition here) In the meantime, enjoy these animated GIFs of deep-ocean creatures that wound up in the sub’s LED beams—many of them likely experiencing bright light for the first time.

This is a dumbo octopus using its ear-like fins to swim. According to NOAA, this coiled-tentacle posture has never before been witnessed in this species.

Here’s another view of the same dumbo octopus.

This was an exciting moment. A bright red creature—a Humboldt squid?—swam right past the sub’s cameras before disappearing into the darkness.

A rat tail fish suddenly realizes it has an audience.

A jellyfish in a current.

A little red shrimp swims away from the sub.

At first, the researchers couldn’t tell what this creature was, only that it was rapidly fleeing the ROV. Turns out to have been some kind of ray or skate.

Update May 8, 2014: According to mission biologist Stephanie Farrington, the team later determined that the sediment cloud in this GIF was actually caused by a sliding rock.

Here, oil naturally bubbles up from the ocean floor amid sea urchins and mussels.