DARPA’s Future Tank Will Think Its Way Out Of Fights

Invention is the better part of valor 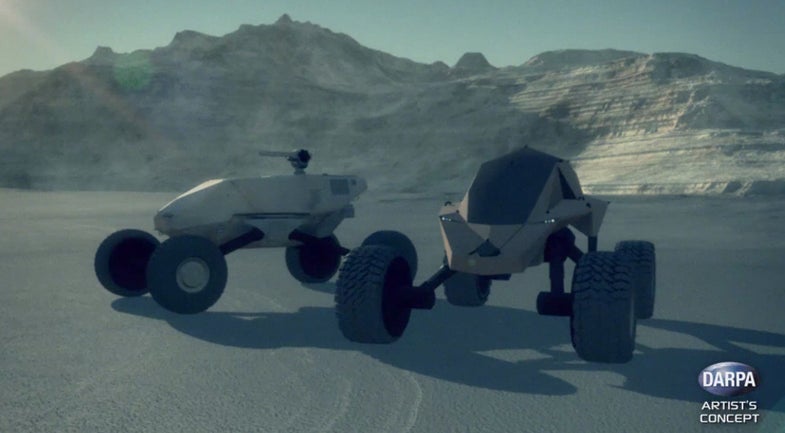 Tanks are made for confrontation. First designed to crash through trenches and survive machine guns in World War I, the heavy, armored vehicles are machines of headlong destruction. Modern tanks, thick with armor and sporting power cannons, functionally perform the same service: go where the enemy is, and make them gone.

DARPA, the Pentagon’s future-forward projects agency, wants a new, smarter, tank-like vehicle that does something different. DARPA wants a tank that can find the enemy, and then route around it like it’s damage.

As powerful as tanks are, the have major flaws. Armor makes them heavy, which limits how they can fight and where they can fight. That’s fine if there’s time to put tanks in the area in advance, and to scout in advance the terrain where the fight will happen. For decades during the Cold War, NATO planned for massive tank battle in Germany’s Fulda Gap. But now DARPA wants tanks that can go anywhere a helicopter can go. That means they need to be lighter.

Which means less armor, which creates a design problem for the tank maker: how can a vehicle still survive as well as a tank, if it can’t withstand direct hits as well?

One way to compensate for light armor is to simply avoid the enemy. In a video of the concept released earlier this week, a pair of vehicles in the clumsily named Ground X-Vehicle Technology program spot an enemy across a bridge. The foe appears to be a pickup truck with weapons attached. It’s what the military refers to as a “technical,” and while it’s not the deadliest vehicle, the guys inside could still have anti-tank missiles, and the bridge is a vulnerable place to cross. So the smart DARPA tanklets instead drive around it, down the valley and back up the sides again, avoiding the enemy entirely, or at least approaching the fight from a more favorable position.

This week, DARPA awarded contracts to several companies for developing parts of the Ground X-Vehicle Technology program. Besides a light weight and the ability to drive over all terrain, they want to make sure the vehicles are hard for enemies to see, on the visual, infrared, and electromagnetic spectrums. Under a heading about “crew augmentation”, DARPA says it wants the tanks to have “semi-autonomous driver assistance and automation of key crew functions,” with better sensors and situational awareness for the drivers inside, which will work without external information. And, perhaps most importantly, they want to make sure the tanklet can dodge attacks. Armor is nice. Not getting hit in the first place is better.

Watch an earlier video of DARPA’s GTV-X in battle here, and watch the one of it avoid battle entirely below: