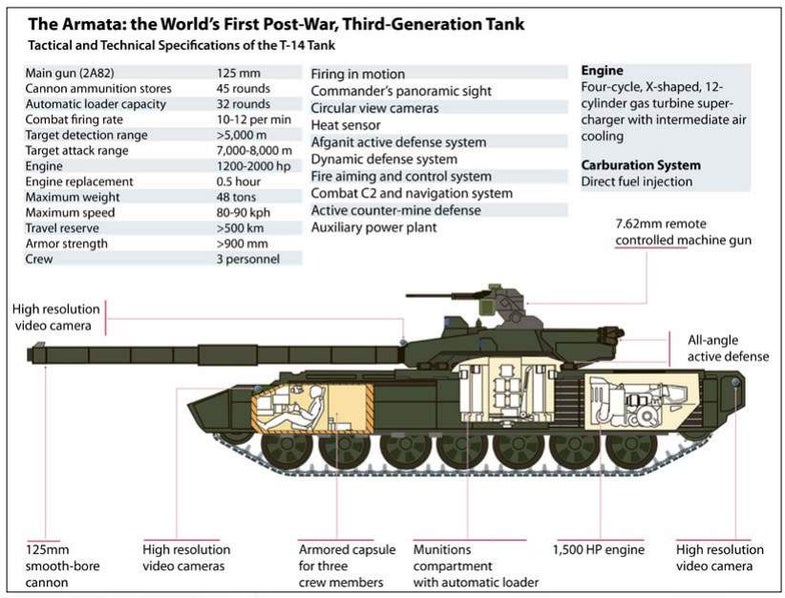 Tanks rarely live to see the next war. The first of the armored lumbering war machines were obsolete as soon as World War I’s armistice was signed. After World War II, the United States tried to reuse Sherman tanks in Korea, and found them horribly outmatched by new Russian designs. But now, well into the 21st Century and with an active land war waged on its border, Russia is about to start using a brand-new tank. Here’s how the country’s new “Armata” will work, according to a translation by the U.S. Army’s Foreign Military Studies Office.

The Armata’s stats are roughly comparable to the U.S. Army’s M1 Abrams main battle tank, though the Armata is slightly faster and slightly lighter. More interesting than the raw numbers of the vehicle are the defensive systems installed on the tank. One, the “Afganit active protection complex” is, in theory, “capable of intercepting shaped-charged grenades, anti-tank missiles, and sub-caliber projectiles,” which it will likely do by shooting rockets at incoming projectiles. It’s no force field, but shooting rockets at other rockets is still very much the future.

In fact, the only thing more futuristic would be if Russia was making a supersonic transport plane to carry the Armata tank. Oh, wait.