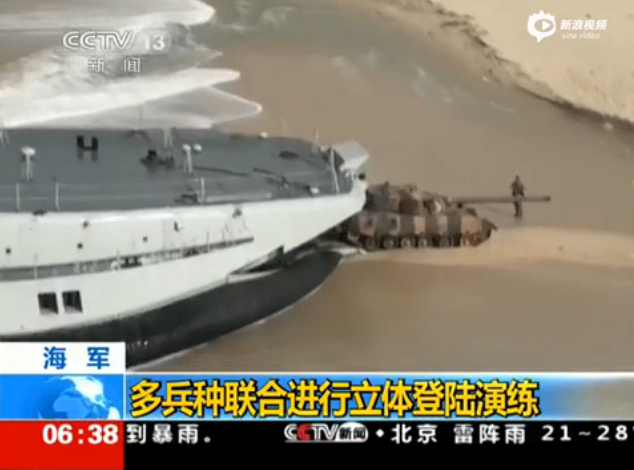 In July 2015, one of China's Zubr hovercraft provided the quick and protected transport of a ZTZ-96 main battle tank onto the beach, turning the tide of the amphibious invasion attack in favor of the Chinese Marines. CCTV 13
SHARE 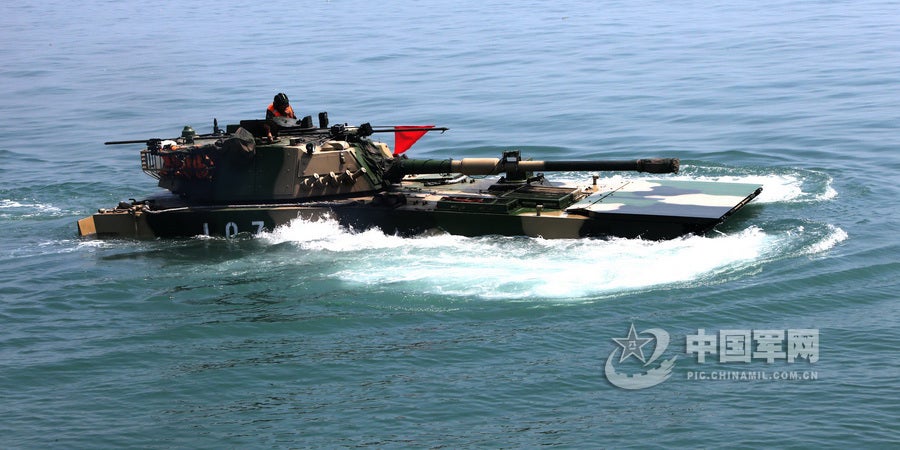 China’s ZTD-05 amphibious tank, armed with a 105mm cannon that fires both high velocity shells and guided missiles, is the world’s fastest amphibious vehicle, speeding through the water at over 20 knots per hour.

Just as in fields from air defense to anti-submarine warfare, the Chinese Navy has made great gains in the field of amphibious invasion capacity, which it recently demonstrated in military exercises in the South China Sea.

In July 2015, one of China’s Zubr hovercraft provided the quick and protected transport of a ZTZ-96 main battle tank onto the beach, turning the tide of the amphibious invasion attack in favor of the Chinese Marines. 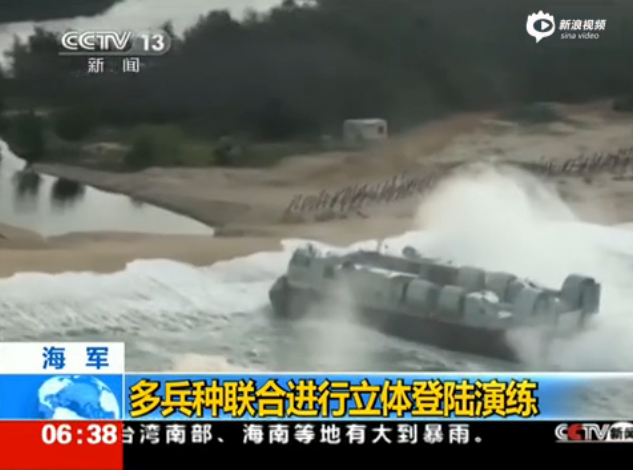 The smaller but flexible Type 726 Yuyi LCAC disembarks from a TYpe 071 LPD carrier, at speeds of 60 knots, to land a company of Marine infantry behind the armored spearhead of ZTZ-96 tanks landed by Zubr hovercraft.

The two platforms key to Chinese amphibious operations are the Zubr and the Type 726 Yuyi Landing Craft Air Cushioned (LCAC) hovercrafts. Compared to traditional landing craft, which can access only 15 percent of the world’s coastline (mostly beaches), hovercraft float on a cushion of air, allowing them to access 70 percent of the world’s coastlines.

3325 is the first of China’s domestically built Zubr armed hovercraft, commissioned in early 2014. Weighing over 400 tons fully loaded, it can carry three battle tanks or company of armed soldiers.

The Zubr hovercraft, designed by Soviet engineers, is the world’s largest and most heavily armed combat hovercraft. It has an impressive 40 knot speed and 300 mile range, which creates wide options for assault planners. While armed with 30mm Gatling cannons and 140mm rocket artillery, the Zubr’s most deadly asset is its 150 tons of cargo, which in the war game carried ZTZ-96 main battle tanks. This gives Chinese marines a heavy punch of tanks to shock and smash enemy coastal defenses. To date, China has purchased two Ukrainian Zubrs and license-produced two more. 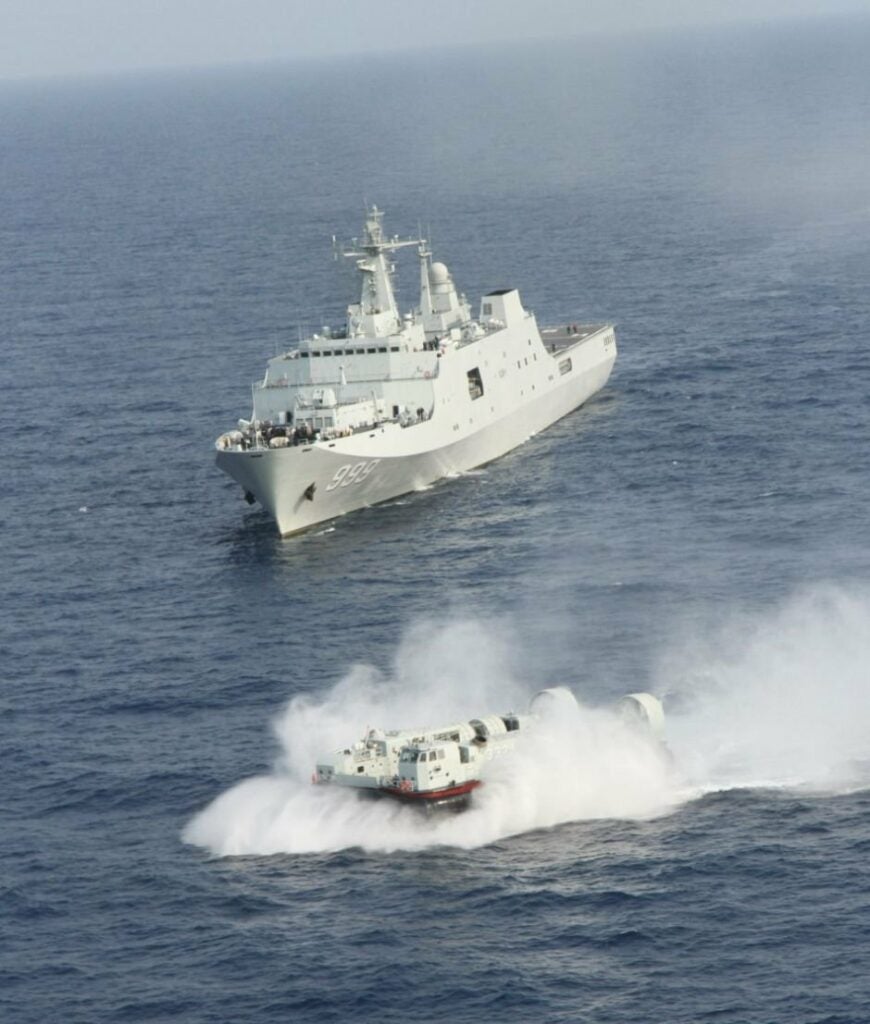 Yuyi LCACs are just as important. While Type 05 IFVs provide the first wave of troops to take the beachhead, the 60 knot, 60 ton payload Yuyi, a 21st century answer to the Higgins Boat of “Operation Overlord” fame, carries the bulk of infantry needed to exploit the breakthrough on the beach. During the exercise, the Yuyi blitzed out of the Type 071’s well deck and onto the relatively safer beach after the initial landing, unleashing a company of PLAN marines. 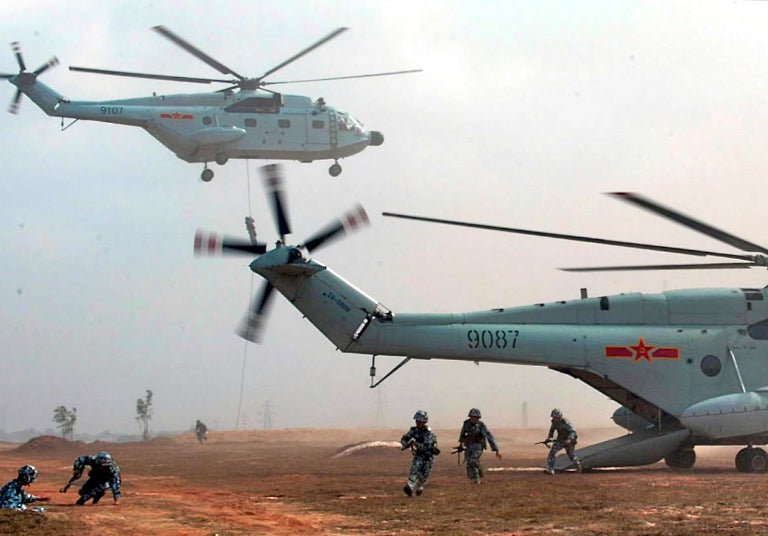 China’s wargames show its interest not just in new technology but in integrating cross platform operations to address the difficult problem of large, contested amphibious landings. The next step will be to bring the PLAAF, PLA and 2nd Artillery onboard to provide support like air superiority, long range missile strikes and cyber attacks in support of amphibious combat. With strategic Chinese interests increasing from Asia to Africa, the Middle East and Latin America, such growing capabilities matter not just in the South China Sea and Taiwan Straits, but may ripple beyond to more distant waters.