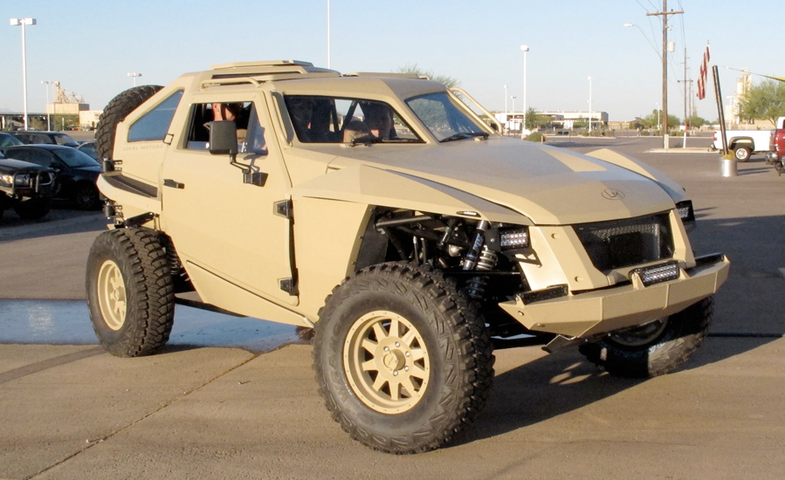 This shot is from the FLYPmode's grand unveiling last week. The vehicle took just three weeks to design and three and a half months to build. Local Motors
SHARE

The military and defense contractors can learn a lot from the wisdom of the masses, and American fighting forces could be better equipped and better protected if higher-ups would embrace the DIY ethos of ingenuity and agility. At least that’s how Jay Rogers, founder of an automotive firm that just built a military concept vehicle from crowdsourced plans, sees things.

Rogers’ team of designers and engineers at Local Motors in Phoenix built the car, nicknamed FLYPmode, from scratch in less than four months, unveiling it for President Obama last week before delivering it to the military’s mad-science division in Virginia. If makers like Rogers get their way, the first Experimental Crowd-derived Combat Support Vehicle, or XC2V, just might be the future of the military industrial supply chain. But Rogers and his advocates face some hurdles first.

Click on the thumbnails to see some shots of the FLYPmode concept vehicle.

Last week, a Senate Appropriations Committee report took issue with several of DARPA’s blue-sky projects in the 2012 defense budget, including the XC2V. It’s part of DARPA’s FANG project, for Fast Adaptable Next-Generation Ground Combat Vehicle. While acknowledging it’s a good way to infuse the defense industry with new ideas, the committee is apparently concerned that the FANG project does “not adequately address” armor technologies and other safety issues, according to the report, obtained by the defense watchdog group Inside Defense and reported by Danger Room this week.

Rogers, a former Marine with nine years of service, takes umbrage at the notion that a crowdsourced, rapid prototyping process is unsafe. The victors of great global conflicts will not win because they’ve spent tons of time and billions of dollars, Rogers said: “They win it because they figured out what was going to beat the enemy, and they built that.”

Humvees were not designed to be especially blast-resistant, which is why the U.S. is spending so much time and money retrofitting them with armor. New designs like the FLYPmode can be engineered specifically to deal with modern threats like improvised explosive devices, Rogers said.

Rogers imagines this scenario: An American platoon in Afghanistan radios a forward operating base with the news that the platoon needs supplies, fast. A boxy brown combat vehicle speeds to their aid, carrying supplies and stretchers for wounded warfighters with greater haste than an armored Humvee. When the vehicle arrives, Marine unload their beans, bullets and Band-Aids and quickly install a new weapon mount, pre-fabricated using CAD software and a 3-D printer from the FOB.

“What is safety in a vehicle? Is it putting somebody on the outside of a vehicle designed in the 1960s, and up-armoring it, or is it designing a new vehicle with blast channels?” he said. “Maybe we did not do the same development that (contractor) General Dynamics did, to make sure the strut on the vehicle lasts a million miles. But if it saves a life, and it lasts for a whole conflict, haven’t we done a better thing?”

The goal was to quickly design and build a fully deployable vehicle, and Local Motors beat DARPA’s deadline, Rogers said. It’s the sort of task that would be next to impossible in a traditional military procurement process. But still, the FLYPmode is just a prototype, he said.

“We made one vehicle. but we made it right, and we did it in a way in which we’re trying to prove a process. I think we succeeded in spades to make that proof of concept successful,” he said.

DARPA engineers will test it next. For its part, the agency said XC2V helped DARPA learn more about the crowdsourcing process, and how it could be used to enhance the agency’s Adaptive Vehicle Make program, which seeks to compress development timelines five-fold.

“(It will) lower the barrier to participation in innovation and manufacturing,” said Paul Eremenko, DARPA program manager.

Obama was even more optimistic: “Not only could this change the way the government uses your tax dollars — think about it, instead of having a 10-year lead time to develop a piece of equipment, if we were able to collapse the pace of which that manufacturing takes place, that would save taxpayers billions of dollars — but it also could get technology out to the theater faster, which could save lives.”

Local Motors has been helping DIY auto-lovers build cars like street-legal rally racers since Rogers founded the company in 2007. Designers and enthusiasts submit car concepts, and a community of Local Motors users cast votes and comments throughout a competition, choosing a winning design. When DARPA came calling for a rapid military prototype, it was a perfect fit. The company received a $639,000 contract. Local Motors and DARPA officials set specific guidelines for the XC2V contest, so it wasn’t exactly starting from scratch — the winning concept had to be a high-speed recovery and resupply vehicle, which could transport a platoon-sized delivery of C-bags full of supplies and enough room to transport three wounded soldiers or Marines. It was not designed for infantry and it was not an armored personnel carrier — “There were so many things it wasn’t,” Rogers said.

Competitors were able to watch videos of typical combat situations in Afghanistan, and a design brief outlined the basic requirements and limitations. The car would be loosely based on Local Motors’ Rally Fighter chassis, with new designs for getting in and out of the car, wheel balance and other elements. Over two weeks, designers submitted 160 legitimate concepts, and the community voted on the submissions.

To borrow a phrase, apparently Flypmode was the greatest. Woo hah!

The contest sparked some controversy in the design community, with critics saying Garcia’s friends voted for it and that better designs didn’t get a fair shake. Rogers said he understands others’ concerns, but argues that Local Motors’ algorithm is sophisticated enough to grant varying weights to certain users depending on their own participation, reliability and other factors. He compared it to Amazon.com’s user ratings system, which essentially reviews the reviewers.

“We make it very clear that it’s not based on a popularity contest. Just because you had more votes does not mean you’re going to do better,” he said.

In all, it took two weeks to collect submissions, one week to verify that no patents or trademarks were violated, and three and a half months to put everything together, Rogers said.

“It blows my mind. It was just an idea in somebody’s head,” he said. “We did it through crowdsourcing, and it’s a car that could be used, and its data is freely available for people to mod it and go forward.”

FLYPmode is just one part of a planned $1 billion, 5-year manufacturing program at DARPA, meant to breathe new life into American industry. Rogers said he hopes future projects will be just as fruitful, but he’s not quite as excited about proving new concepts.

“As a good solider and a good Marine, and someone who wanted to show the military industrial complex this could be done, that’s awesome, but now I am interested in doing the vehicles,” he said. “If (companies like) Oshkosh Defense got real, and quick enough, they could use this methodology to do great things. If they don’t, then it could be up to us. Do we create a new division of local motors for military contracts? Maybe.”

Then the crowdsourced car could serve much more than the armed forces — it could invigorate an entirely new form of industry. 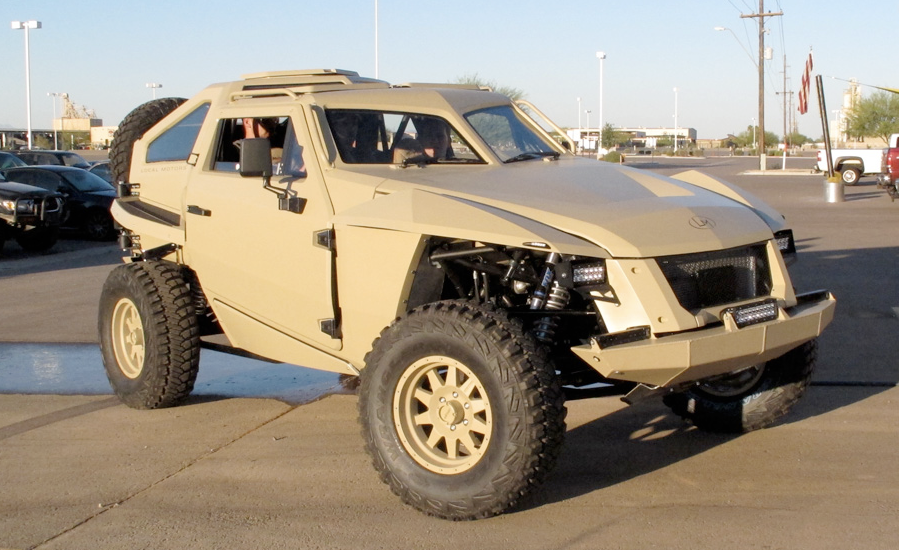 This shot is from the FLYPmode’s grand unveiling last week. The vehicle took just three weeks to design and three and a half months to build. 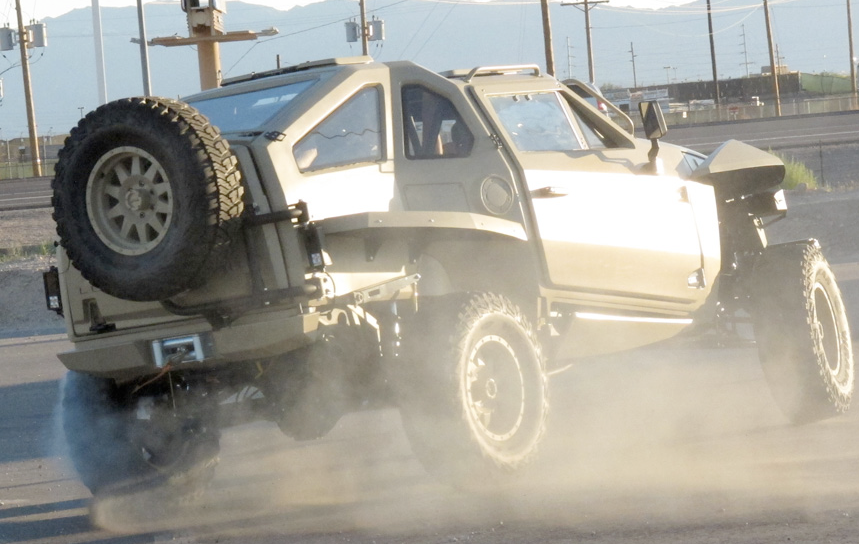 Leaving Humvees in the Dust 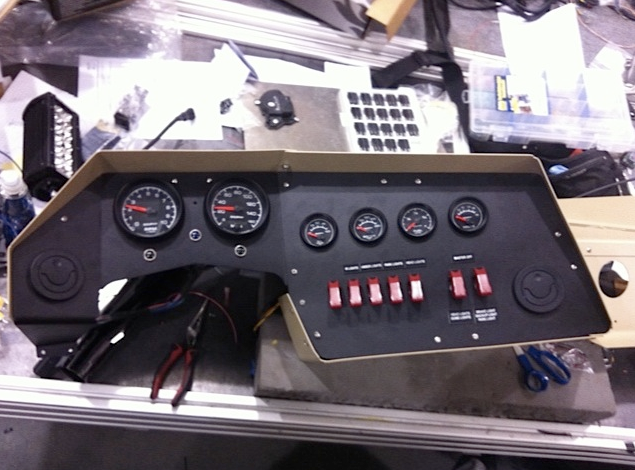 The FLYPmode’s instrument panel was designed in about two days. 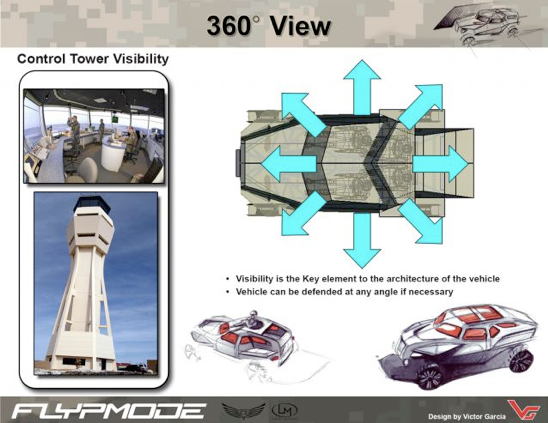 Part of the winning designer’s schematic shows the FLYPmode’s 360-degree view of the field, a major advantage for a tactical vehicle. 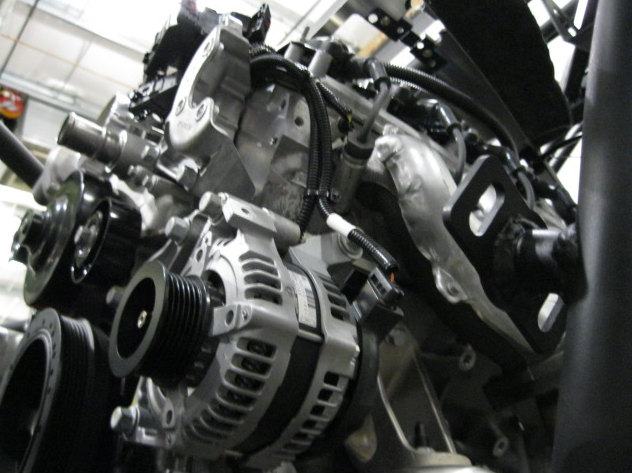 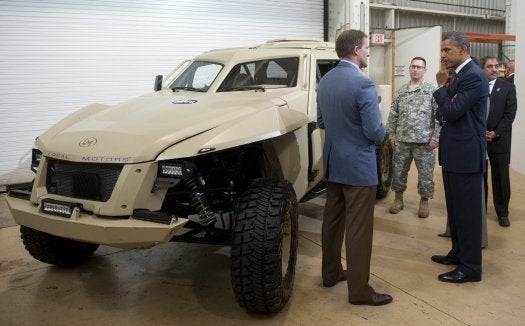