China Builds the World’s Fastest Tank Gun, Then Tries to Hide It 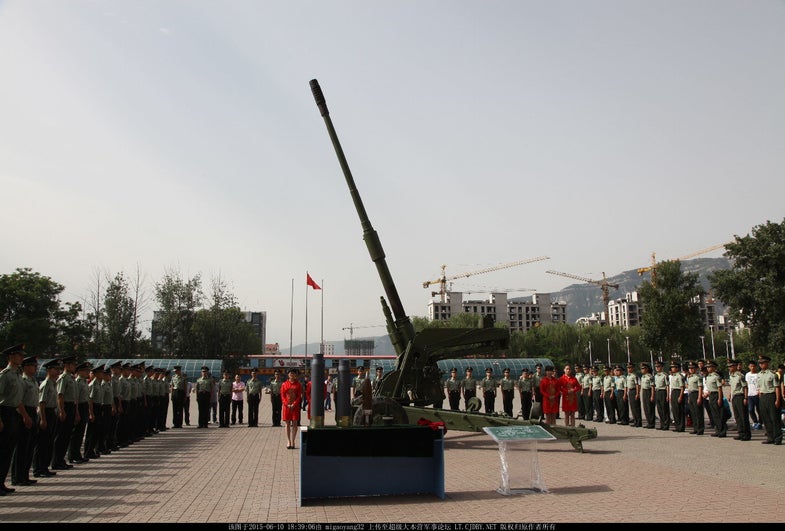 While new tanks like the Russian Armata and Turkish Altay are taking the spotlight in the world of armored vehicles, China has a new tank gun that might just beat them all. The 127th Ordinance Institute, of the Central Northern University, handed over a new 125mm cannon to PLA officers at a June 10, 2015 ceremony. The Institute claims that the new multipurpose cannon will have the highest range, velocity and penetration power of any 120mm/125mm cannon in the world. Where the story gets more interesting is that by June 14, all references to the new 125mm cannon had been scrubbed from the University’s website, which suggests an official desire for secrecy during tests. 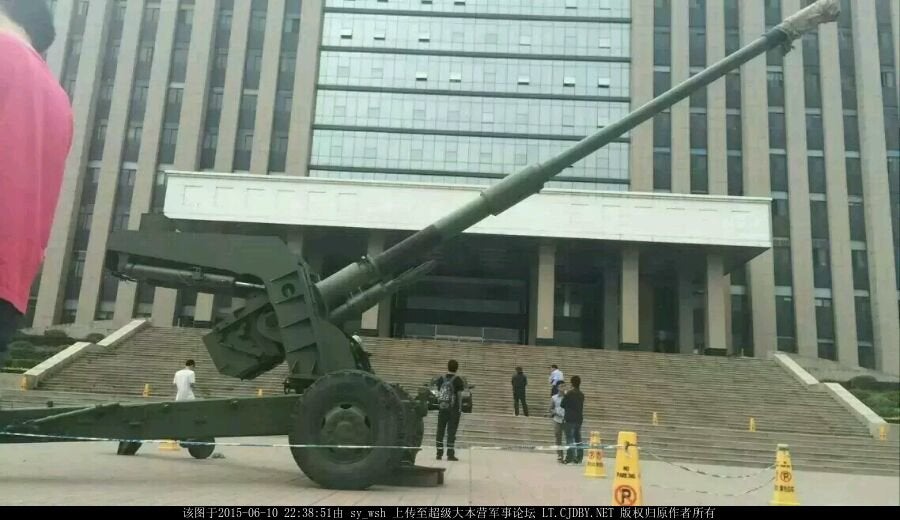 The 127th Ordinance Research Institute’s news 125mm tank cannon is the world’ largest, with a barrel length over 7.5 meters and highly powerful shells.

The multipurpose cannon achieves its high performance through a high length to caliber ratio of at least 60:1 (the longest tank gun in service is the German 120mm cannon, which has a ratio of 55:1), and a larger cartridge, that stores more propellant explosives. While the multipurpose cannon is currently mounted on a towed carriage, several characteristics suggest that it is intended in use for enclosed spaces (IE tank turrets). 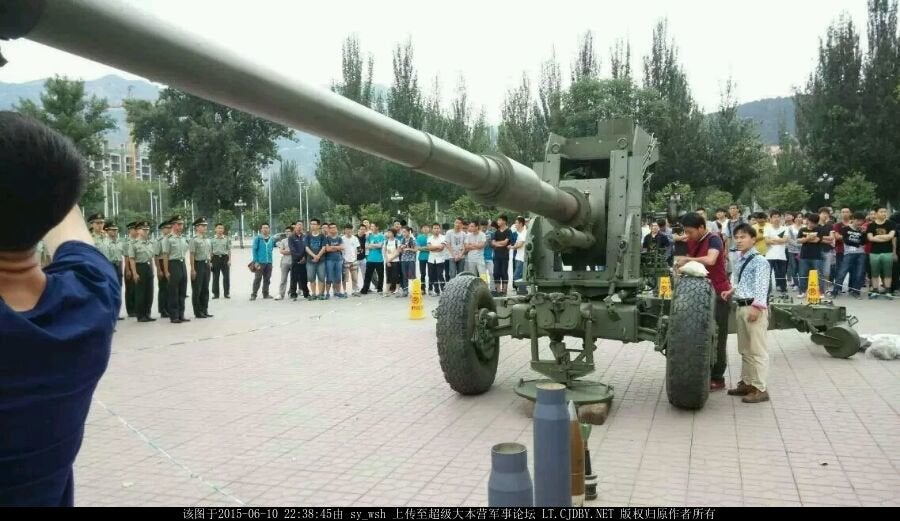 Looking at the staff preparing the gun (just for the handover ceremony), it’s going to require a very big and tall turret to take advantage of the gun’s full elevation capabilities (though the production model may have a lower maximum angle of fire), larger than those found on current Chinese tanks. Also note the fume extractor (the smooth bulge on the midsection of the barrel) that siphons off poisonous fumes and other propellant byproducts to avoid poisoning any turret crew.

Located on the middle of the barrel is a bore evacuator that aids in the release of combusted explosive fumes, to prevent those toxic gases from accumulating inside an enclosed space, which would otherwise poison crew members and foul the gun. The multipurpose cannon’s recoil system is installed onto the top of the towed carriage frame and top of the cannon breech block, which is optimized for horizontal firing (anti-tank and direct fire) as opposed to high angle artillery fire. 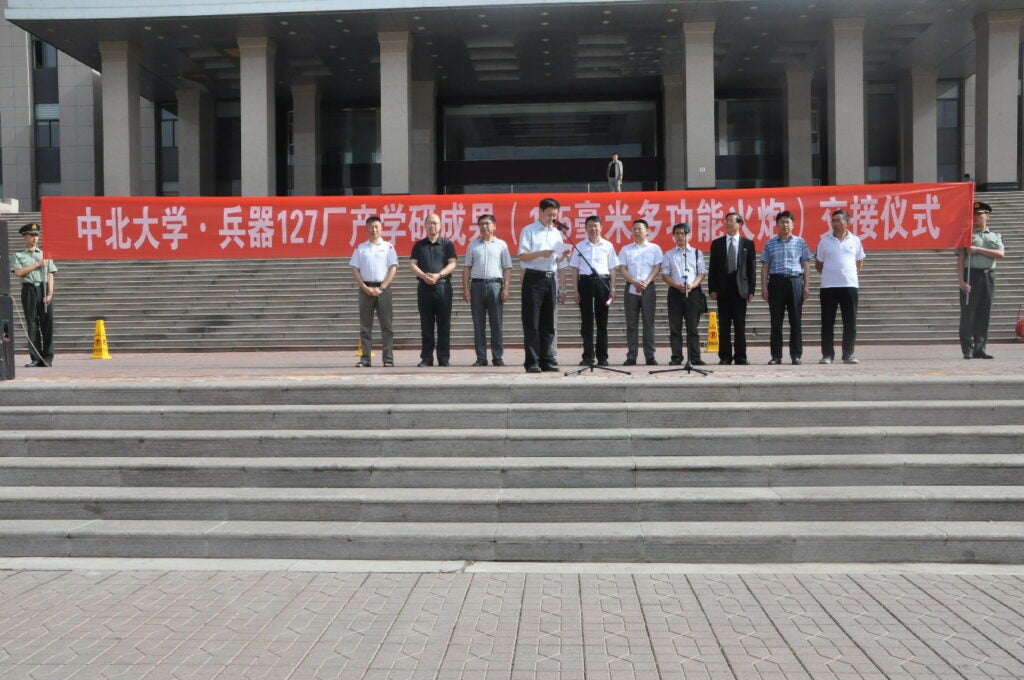 The text on the red banner held up by PLA soldiers reads “”Central North University, 127th Ordnance Institute’s Research Result (125mm multi-purpose gun) Handover Ceremony”. If the multipurpose cannon is a success, then it will be an example of the Chinese defense industry moving into partnership with academic and academically based partners. 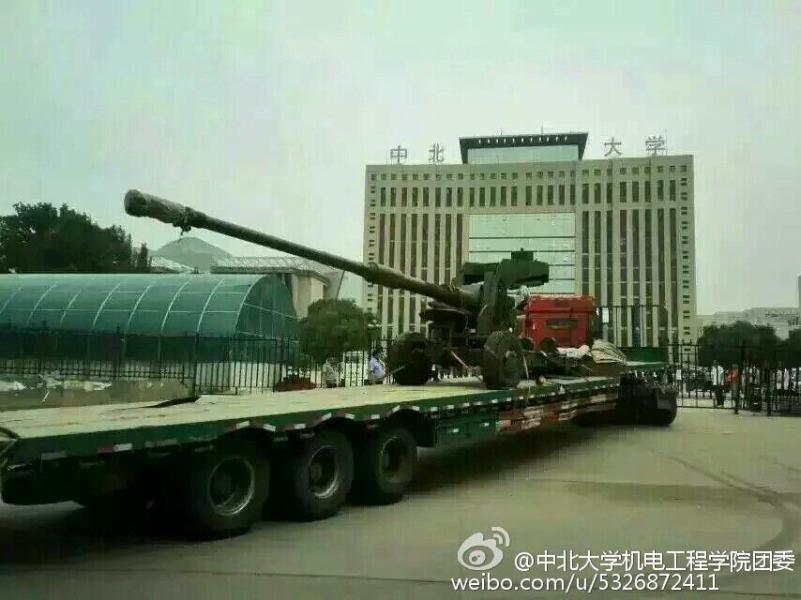 Cannon on the Move

The 125mm multipurpose cannon tech demonstrator will be delivered to a PLA testing and proving ground. If successful, it will likely arm the next generation of Chinese main battle tanks, possibly just in time for the 70th anniversary of the People’s Republic.

Just as importantly, the new tank cannon uses one piece ammunition, in contrast to the 125mm two piece ammunition used by current Chinese tanks such as the ZTZ-99 and ZTZ-96. The autoloader on those tanks are limited to two piece 125mm ammunition due to size restrictions, which in turn results in a smaller APFSDS rod with less kinetic energy. The new one piece 125mm ammunition will allow for larger APFSDS rods, while keeping the caliber to 125mm to save weight, as opposed to scaling up to a larger caliber, such as 140mm. 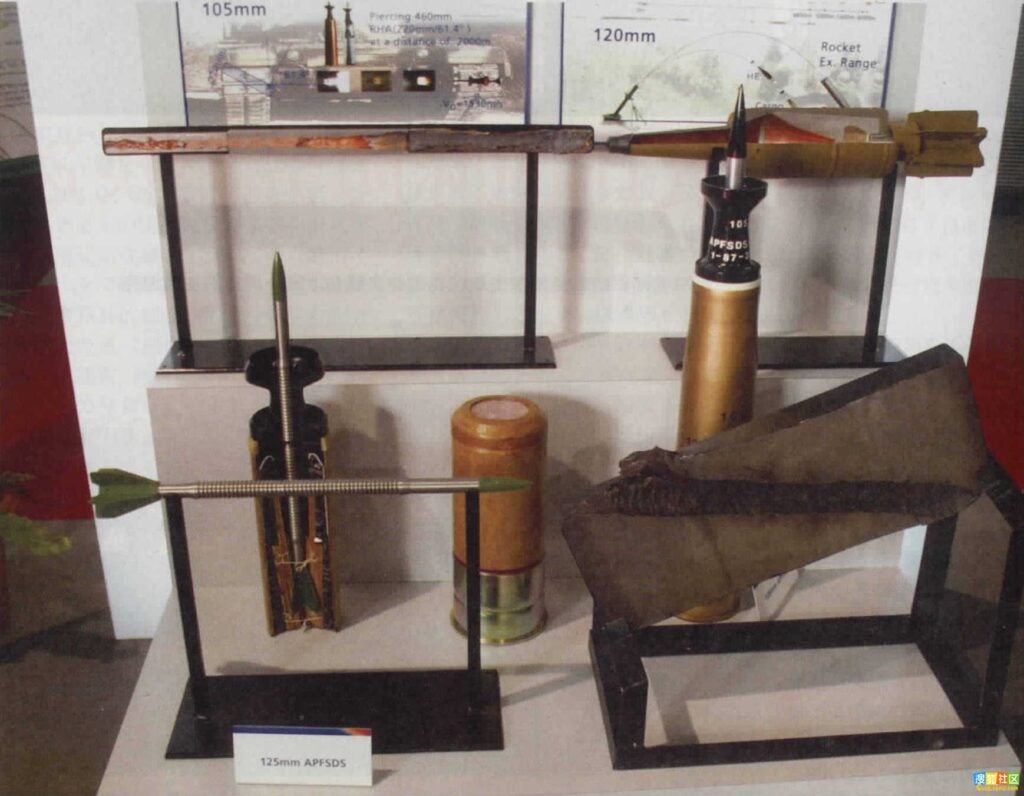 This older two piece APFSDS 125mm ammunition’s rod has a length of about 650mm, which makes it much smaller than the maximum 1200mm length for the new 125mm, one piece APFSDS shell. Its smaller rod has less mass (thus impacting enemy armor with less kinetic energy) because the hull mounted autoloaders of the ZTZ-99 and ZTZ-96 tanks are only large enough to handle smaller pieces of ammunition. 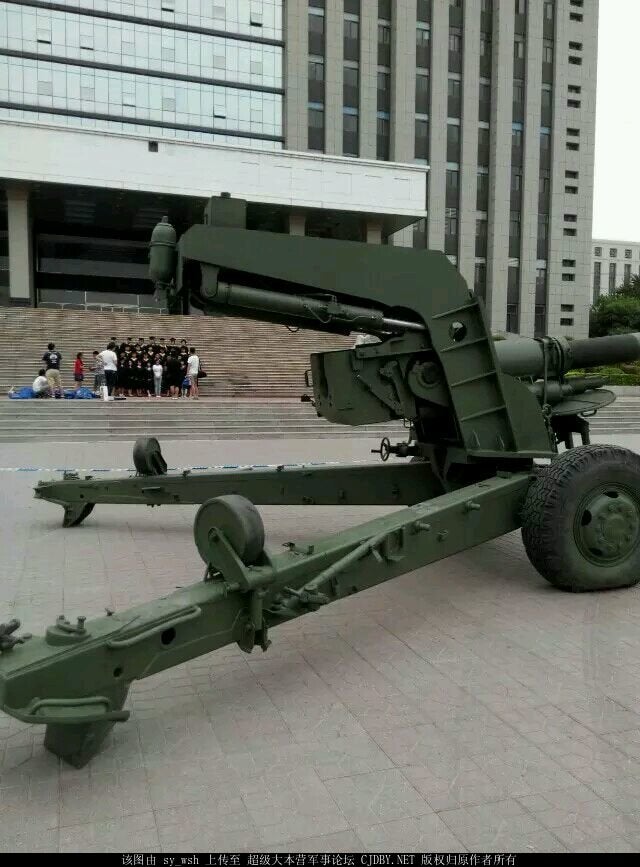 The recoil hydraulic tubes are positioned to so that they’re attached to the top of the breech block (where the shell is loaded) and the top of the towed carriage mount. The optimizes reduction of recoil on the horizontal plane when conducting direct fire at enemy tanks, but raising the cannon to a higher elevation to fire at aircraft could damage the recoil system.

Much as China is making high profile investments into new generation technologies battlefield robots, drones, infantry exoskeletons and smart missiles, its also making great improvements to current military technology like tanks. The new tank cannon is yet another example of how Chinese forces (and any foreign sales clients) will be far better equipped on any the battlefield of the future.