At Army Exposition, We Tried On BAE’s Panoramic Camera System

And peeped at some so-called "transparent armor" 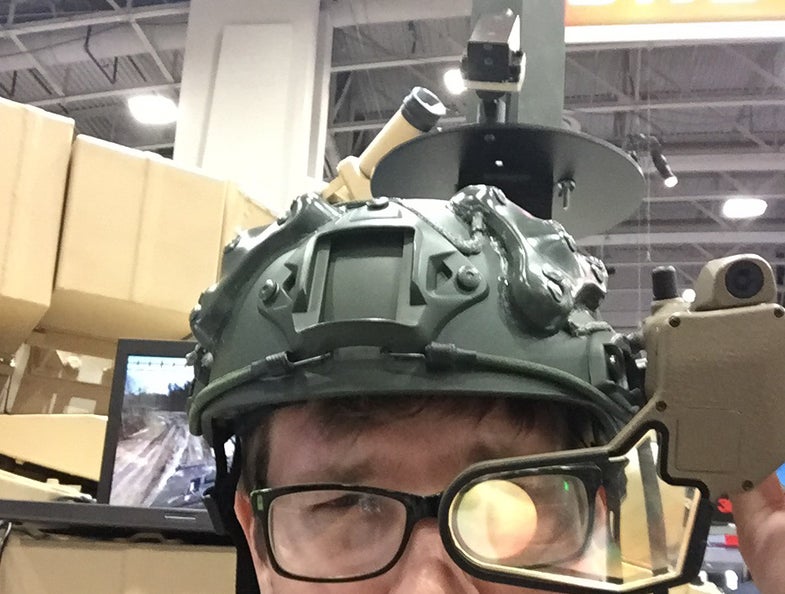 I wasn’t expecting holograms when I woke up this morning. Several hours later, seated on a chair at the Association of the United States Army exhibition hall, I was looking through the people standing right in front of me, the environment behind them projected onto a hologram lens hanging off my helmet. I looked ridiculous, but felt omniscient.

The holographic screen is an updated version of BAE’s Q-Sight, a holographic display that’s been used by the military of the United Kingdom since 2007. This version is in full color, and was hooked up to a tower behind me, where three 120-degree cameras scanned the crowd. Their images were then stitched together by a computer into a panorama, and fed into both the lens in front of my face and a laptop on a counter nearby. There was also video shot by a Swedish armored personnel carrier using the same system, and as I turned my head, the camera angle of the video feed moved too — a more combat-ready use of the camera than the crowds of a convention hall.

The other system BAE demonstrated, with a name that sounds like a G.I. Joe playset, “BattleView 360” is billed in official press materials a way to make “see-through armor.” That’s a clever phrase, but a bit of a misnomer. The images in the headset all come from external cameras. In one imagined use, the cameras are on top of a tank or troop transport, giving the crew inside a view of the outside world without exposing themselves to gunfire. Useful enough, but BattleView 360 can do far more interesting things.

A tablet hooked into the system displays maps updated in real time, showing not just the terrain but ranges of known enemy weapons in the theater, allowing drivers to steer clear of artillery. Troops sitting in the crew compartment of an armored vehicle could use tablets on patrol, scanning the map for information the driver and navigator may have missed. Most interesting to me was the option to toggle on a feed from a drone camera. If set up, the navigator inside could switch into hologram vision from a drone’s gimballed camera, looking at the area from above as they travelled.

So far, the system has been tested with a Swedish CV-90, and demonstrated on an American Bradley Infantry Fighting Vehicle. There are no plans yet for a military to adopt the BattleView 360 system.

As I scanned the crowd during the demonstration, vehicles normally obscured by the people in front of me lit up with little red triangles. For half a second, I felt like Luke Skywalker, targeting-camera ready.