The potential of tablets to transform the way we learn is pretty extraordinary. The first really “wow” app we saw... The potential of tablets to transform the way we learn is pretty extraordinary. The first really “wow” app we saw for the iPad was a re-imagining of the periodic table. Wonders of the Universe, a new app from the BBC, HarperCollins, and Professor Brian Cox, takes you zooming through our universe, from a broad view at multiple galaxies all the way down to a look at subatomic particles–with more than a film’s worth of videos, a staggering amount of gorgeous space photos, and hundreds of interesting articles as well. It takes the idea of an interactive textbook far beyond what we’ve seen before.

Wonders, which launched this morning and costs $6.99 (for a limited time), is astounding. Most of the screen is taken up with a zoomable 3-D universe, bright dots of activity on a velvet-black background. There’s a navigation bar up at the top that takes you to sections that include “Sub Atomic,” “Atomic,” “Solar System,” “Stars,” “Milky Way,” “Galaxies,” and “Universe.” Tap those and you’ll be zoomed off to the start of the chapter. 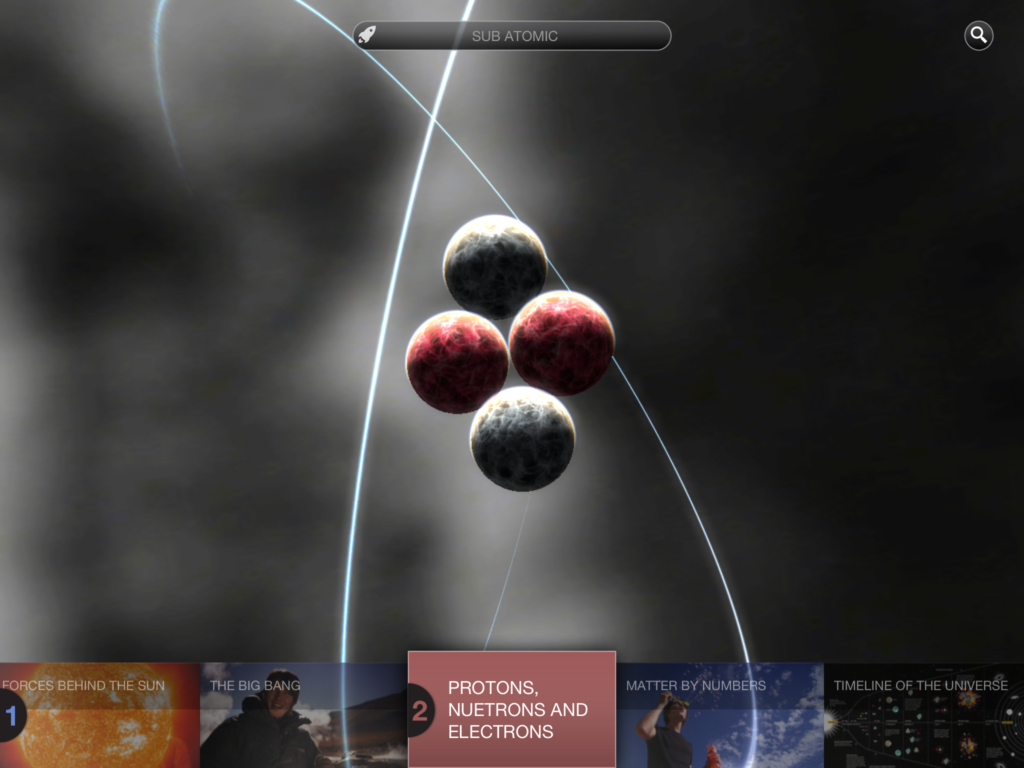 Zoom down to the tiniest subatomic particles.

At the bottom of the screen, a horizontal scrolling bar displays topics relevant to the part of the universe you’re in. Free-form zooming and scrolling through the universe is fun, but the app sort of keeps you on a path to learn about specific topics in a specific order. Which should be more clear from the outset, since anyone’s first instinct will be to zoom and swipe, and tap on the individual labels (“Andromeda Galaxy,” “Crab Nebula,” etc). Since all of the “chapters” are connected–Sub Atomic fits in Atomic which fits in Solar Systems which fits in Stars which fits in Milky Way, and so forth–you can zoom between them by pinching on the background. Zoom out enough while looking at Solar Systems and the bottom bar will start offering articles and videos about Stars; and so forth. You read articles on specific topics by pulling them up from the bar at the bottom of the screen, and then closing them when you’re ready to move on.

These individual topics are great–most of them have at least one video, produced by the BBC, as well as a handful of very pretty space pics and a medium-length article. The text is super readable (though there are a few typos, which we’ll chalk up to first-day jitters). It’s written for space enthusiasts, not astrophysicists, which is a good thing. There are over 200 articles in the app. The videos are top-notch, and there’s a total of about two and a half hours of video on here. They’re not exclusive to the app; they’d previously appeared in the BBC’s Wonders TV series. Wonders: The Demise of Our Universe

This is what articles look like. As a note, the app works in either landscape or portrait orientation–I found myself flipping a bit, as some things work better in landscape (videos, pinch-zooming through the universe) and some work better in portrait (text).

The video is mostly streaming, rather than downloaded; I’d say on the whole that’s a good thing, because the app would be absurdly large if you had to download all the content. On the other hand, you need to have an internet connection to use a lot of the app, but if you’ve got a good Wi-Fi connection (or you have LTE on one of the new iPads, like we do), it’s great.

It’s a startling app–it can sometimes be a little confusing to navigate around, but given the scope of the entire universe, maybe that’s to be expected. And it’s ridiculously fun and pretty–the models of various aspects of the universe are beautifully modelled, the articles are well-written and the videos are well-produced. It is not, we should say, a real replacement for a textbook. There’s not enough information–it’s definitely a survey course, a Cliff’s Notes tour of the universe. But as an iPad version of a great BBC series, it’s fantastic, and it definitely gives us a sense of what textbooks could look like in the future.