The Strongest Electrical Current in the Universe Spotted, 2 Billion Light Years From Here

Looking for a source of renewable electricity? Researchers at the University of Toronto have found some serious current emanating from... 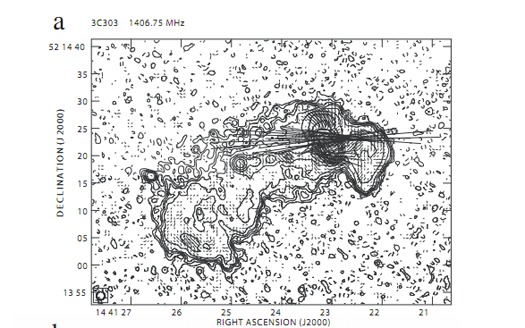 Looking for a source of renewable electricity? Researchers at the University of Toronto have found some serious current emanating from a huge cosmic jet 2 billion light years from Earth. At 1018 amps, the current is the strongest current ever seen, equalling something like a trillion bolts of lightning.

The awesome current was found around the galaxy 3C303, whose core is the origin of a massive matter jet. While measuring the alignment of radio waves around 3C303, the researchers noticed a swift and sudden shift in the alignment of those radio waves, the telltale sign of an electrical current.

Why exactly this is happening is unclear, but the researchers speculate that the black hole at the galaxy’s heart plays a role, its magnetic fields generating this current that is so strong that it lights up the matter jet and helps to drive it outward. Way outward. The jet reaches out some 150,000 light years into interstellar space–farther than the estimated diameter of the Milky Way.