The Mystery of the Pioneer Anomaly Solved at Last

A scientific detective story if there ever was one, Slava Turyshev of JPL and his colleagues have spent years tracking... 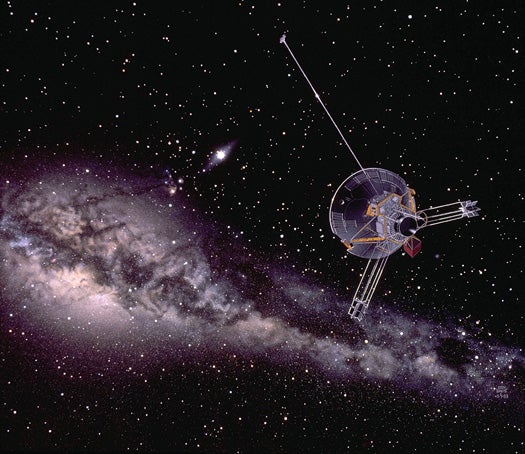 A scientific detective story if there ever was one, Slava Turyshev of JPL and his colleagues have spent years tracking down their villain, the Pioneer Anomaly: an unexplained acceleration in the motion of Pioneer 10 and 11, twin spacecraft that were launched by NASA in the 1970s and radar-tracked for over 30 years. Turyshev and his team have recovered files from NASA dumpsters, converted 1970s punch card data to digital, and spent untold man hours crunching numbers beamed to Earth decades ago from spacecraft billions of miles away.

Finally, the case is solved, and the villain is dead.

As the two spacecraft retreated into the distance, the data they beamed back showed that they were slowing down a little more than they should have been. Long vaunted as evidence that something was amiss in physics — perhaps that Einstein’s theory of gravity was wrong — the anomaly spawned entire academic conferences and thousands of papers.

But, as explained in our coverage of an earlier stage of Turyshev et al.’s work, some scientists believed that the anomaly had a much more mundane explanation. Namely, the scientists suspected that heat was being emitted by the spacecraft’s generators anisotropically — more in one direction than the other. If this were the case, the heat would exert an unbalanced recoil force on the spacecraft, causing them to change speed. Indeed, in April, a group of researchers in Portugal came up with just such a model for how the Pioneers’ heaters could have created a recoil force.

But many have argued that the data itself ruled out this explanation for the Pioneer Anomaly. As the plutonium-238 that served as the Pioneers’ onboard heat source radioactively decayed, it would have emitted less heat over time. Thus, if heat were the source of the Pioneer Anomaly, the anomaly should have lessened with time as well. But the data seemed to suggest that the Pioneer Anomaly was constant — an undying force — and thus much more fundamental.

But for their new analysis [PDF], Turyshev et. al. compiled a lot more data than had ever been analyzed before, spanning a much longer period of the Pioneers’ flight times. They studied 23 years of data from Pioneer 10 instead of just 11, and 11 years of data from Pioneer 11 instead of 3. As explained in their new paper, the more complete data sets reveal that the spacecraft’s anomalous acceleration did indeed seem to decrease with time. In short, the undying force had been dying after all, just like the decaying plutonium. In that case, it was most likely just a consequence of wonky heaters — mystery solved.