Flushing those little lenses adds up to a big pollution problem. 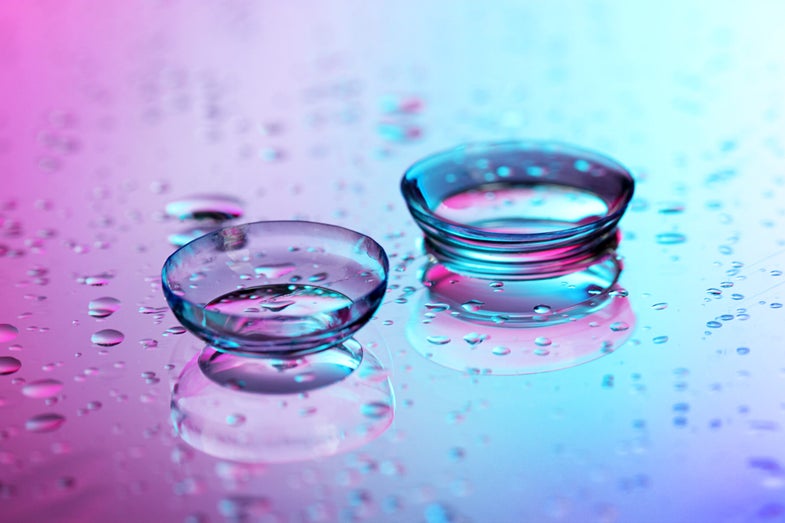 Diehard contacts wearers (like the author of this article) will tell you the best thing about the lenses is that they’re invisible. But that very invisibility, while an asset in the eye, is an environmental liability after each lens’ short lifespan is over. New research presented at the American Chemical Society’s annual conference on Monday suggests that U.S. users don’t really think about where their contact lenses go after they pop them out—and that’s a heavy problem, both on land and in the water.

The conclusions are stark: as a result of lackadaisical disposal practices among one in 5 of the approximately 45 million United States contact lens wearers, thousands of pounds of microplastic ends up heading into the environment—not to mention the tons of waste produced by the packaging the lenses come in. And even when contact lenses aren’t flushed down the toilet or dropped in the sink, they aren’t recycled.

“We don’t know what fraction (presumably a small one) of contact lens users make use of recycling of both lenses and packaging,” Arizona State University engineer Rolf Halden told Popular Science in an email interview. Contact lenses don’t carry instructions on how to recycle the structurally-complicated lenses or the polypropylene blister packs they come in. Halden and his coauthors, graduate students Charlie Rolsky and Varun Kelkar, say the best recycling option for these materials would be for the manufacturer to take them back. “The cleaner and more homogenous the recycling stream is, the easier the recycling process and the higher the value of the output. That’s why we want those blister packs and lenses to go straight back to the manufacturer,” Halden told Popular Science.

To get these results, the three conducted an online survey of 400 people who match the demographics of contact lens users nationwide, asking about their disposal practices. This survey indicated that 15 to 20 percent of U.S. contact users dispose of their lenses in the toilet or sink, rather than putting them in the garbage. To figure out what happens to them after their trip down the drain, the researchers tested how contact lenses behaved in wastewater treatment tanks, which is where all that water goes.

Contact lenses are made of complicated polymers that create a material known as hydrogel. The team found that these polymers sink to the bottom of the wastewater tanks.

“Given that the contact lenses don’t degrade in the treatment plant, they have only two ways out,” Halden told a panel of journalists earlier today in a press conference at the American Chemical Society’s annual meeting. “One is through the effluent, as treated wastewater, and the other is becoming part of the sewage sludge which is the byproduct of wastewater treatment.”

That means that many of the lenses end up spread on fields in fertilizer. From there, the tiny fragments can end up pretty much anywhere—even into the water, thanks to runoff. Literally billions of lenses end up in U.S. wastewater each year, Halden said. Although each one is tiny, the researchers found that together they add at least 44,000 pounds of contact lens bits. The little packs that the lenses come in adds more than 14,000 tons of polypropylene plastic to the impact. The research has not yet been through peer review or been published.

“Disposable contact lenses are more fragile than other plastics, particularly after they have been dried once,” Halden told Popular Science. “Dry contact lenses easily scatter into very small pieces that then can travel even more places and are even more difficult to detect.”

That’s a lot of waste, especially when compared with the tiny boxes full of contact lens packages that every contacts wearer handles on their own. And it’s part of a much, much bigger problem of “invisible” plastic pollution, says Sara-Jeanne Royer. Royer, who was not involved in the current research, is a post-doctoral research fellow at the University of Hawaii who studies plastic pollution. “There are still so many unknown sources of plastic pollutants,” she says, comparing the news about contact lenses to that about microbeads in facial scrubs or microfibers from clothing—just more sources of plastic entering the environment as part of everyday tasks.

But contact lenses are a bit different than either of these examples, because they’re medical devices. “In the medical field, they are very worried about the chance of contamination and infection,” Royer says. In other words, no one wants to risk your gnarly eye bacteria ending up someone else’s eyeball (or anywhere else, for that matter). Because of these concerns, she says, “they do not seem to deal with recycling very well.” But contact lenses are currently thrown away like any other garbage, not like medical waste.

However, there is the possibility that this product could be recycled in an unusual–and helpful–way. What Halden and his coauthors are calling for would be a shift in the culture of contact lens manufacturers, but they think that take-back programs where the manufacturer recycles the lenses and blister packs could make a meaningful difference. One company, Bausch & Lomb, already has a specific program for this aimed at daily contact lens users.

If you can’t send your lenses to a recycling program, Halden says, the best option is to throw them in the garbage. And maybe think about switching from dailies to monthlies—after all, as this particular issue demonstrates, even a little change can make a difference.