Climate Change May Bring This Tiny Unsung Oyster Back To Plates

The obscure Olympia oyster is a delicious survivor 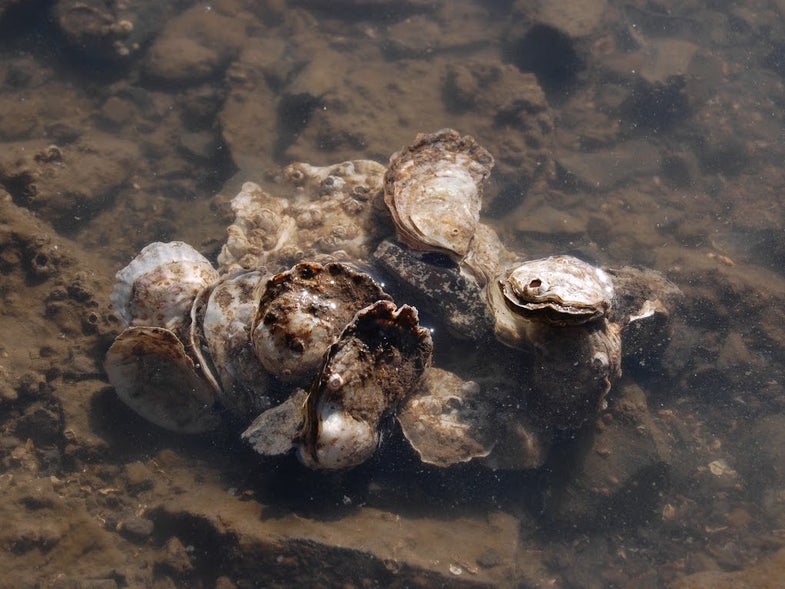 Pacific oysters are sort of the jocks of the oyster world: they’re big, robust, loved by all. On the other end of the spectrum are Olympia oysters: small, slow to mature, their unique qualities appreciated by a loyal few (who affectionately call them “olys”).

While Pacifics are the signature oyster of the West Coast, grown in the tens of millions, Olympias are only grown in small numbers by select farms and rarely represented on restaurant menus. What most people don’t know is that the Olympia is the only native West Coast oyster. The Pacific oyster is actually a relative newcomer, originally from Japan.

For the last hundred years, the Olympia has been overshadowed by its more popular cousin. However, a recent study from Oregon State University has found that in one significant respect, the Olympia tops the Pacific–and it could have big implications for the future of oyster cultivation and consumption.

The Olympia used to range in great abundance from Baja California up to Vancouver, until overfishing during the gold rush began a decline that was hastened by pollution from industry and silt runoff from construction projects. As Olympia stocks plummeted, oyster farmers rushed to import Atlantic oysters from the East Coast and fast-growing Pacific oysters from the Miyagi region of Japan. The two outsider species quickly displaced the slow-growing native oyster. Soon Olympias all but ceased to be cultivated.

Over the last decade, Pacific oysters have been hit hard by ocean acidification, due to a sharp increase in the uptake of carbon dioxide from the atmosphere. Oyster farmers have lost huge amounts of Pacific oyster seed (the microscopic baby oysters that are nurtured to tasty adulthood). And the threat isn’t over. With the acidification likely (certain?) to continue, oyster yields could tank.

Cue the underappreciated Olympia! According to the study, which will be published this week in the Journal of Limnology and Oceanography, Olympia oysters are tougher against ocean acidification than Pacifics.

The key to their success, says principal investigator and Associate Professor of Ocean Ecology and Biogeochemistry George Waldbusser, is the way they spawn. Pacific oyster parents unceremoniously eject their sperm and eggs into water column, and the resulting zygotes rush to form shells, expending tremendous energy in the process. Olympia mothers, by contrast, practice internal brooding, keeping their young inside of their bodies where they can take their sweet time growing their shells. While Pacifics form their shells in about six hours, Olympia babies often take several days. Waldbusser says that the newly spawned Pacifics, spent of energy, are particularly vulnerable to acidified water. The relatively laid back infancy of Olympias leaves them with enough energy to survive the toxic water. Waldbusser likens it to the slow food movement, calling it the “slow shell approach.”

With the future uncertain for West Coast oyster cultivation, Waldbusser believes that oyster farmers may consider breeding the Olympia’s resilient qualities into the Pacific oyster. Or they could simply step up production of Olympia oysters to protect against potentially catastrophic Pacific oyster losses. He thinks this would have the additional benefit of introducing more people to an underrated oyster that has for too long been ignored.

“I think Pacifics are a good entry level oyster,” he says. “But Olympias have more character and a flavor that’s really kind of fun.”