A new biologic logic gate based on proteins can perform binary calculations, serving as the first “cellular calculator,” researchers say.... 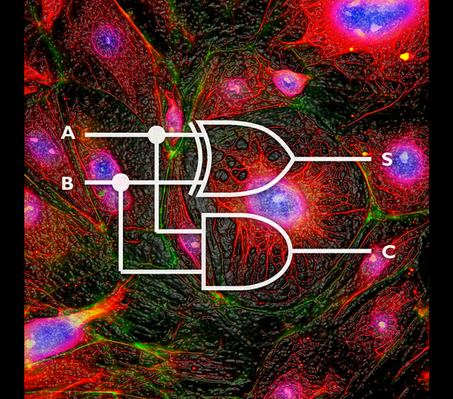 A new biologic logic gate based on proteins can perform binary calculations, serving as the first “cellular calculator,” researchers say. Various combinations of components can be arranged into circuit elements, leading to specific metabolic processes inside a cell. The setup can answer mathematical questions in a similar fashion to a computer.

Bioengineers led by Martin Fussenegger at ETH Zurich built a molecular logic gate using two substances as the transistor elements: the molecule phloretin, which is used to activate nerve fibers and comes from apples, and the widely used antibiotic erythromycin. The substances work as Boolean switches.

The team used proteins that bind to DNA and RNA to control the manner in which certain genes were expressed in a mammalian cell. This yielded a transcription-translation “device,” somewhat like a DNA transistor, that the team could rewire to complete different tasks. In one example, the gene network worked as an AND gate. Both the apple molecule and the antibiotic “inputs” need to be present in order for it to work. The gene network triggers the formation of a fluorescent protein, which serves as the “one.” If both inputs are not present, the cell will not fluoresce.

By combining several of these logic gates, Fussenegger’s team was able to build circuits that could perform basic digital computations. They could even perform two different input and output signals in parallel. The practical purpose of something like this would be to monitor metabolic activity, for instance. Or a cellular computer could even serve as a biological interface with an implanted electronic device — they’ll speak the same language of ones and zeroes.

Other scientists have already built circuit elements in yeasts and bacteria, but in this example, everything is present in one cell, which itself is more complex than prior cellular computers.

Just last week, Swedish researchers described building the first integrated chemical chip for biological material, which could serve as a signaling pathway for biological circuits based on ions and molecules, rather than electrons and band gaps. This would use proteins and DNA.

“Of course, our cell calculator is nowhere near as efficient as a PC,” Fussenegger demurs.

The research appears in the early online edition of Nature.