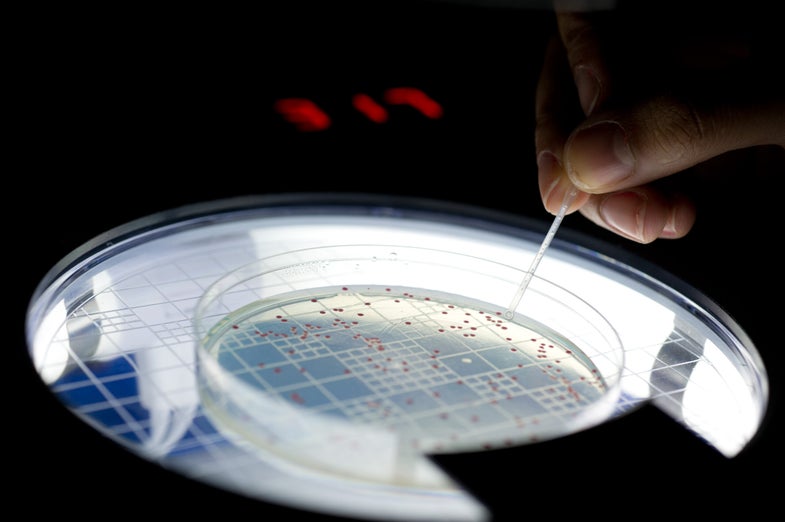 We are still waiting with bated breath for the day scientists resurrect the woolly mammoth. Until then, we’ll have to satisfy ourselves with resurrections of ancient plants and bacteria — which may be more amazing anyway, because they’re even older. The dish in the above image holds a bacterium with a 500 million-year-old gene in it. That’s an era just a little while after the Cambrian explosion, when life became complex.

This story starts back in 2008, when Georgia Tech researchers figured out the ancient sequence of a gene called Elongation Factor-Tu (EF-Tu), which is found in all cellular life. Bacteria need it to survive, so its ancient version presents an interesting window into genetic evolution. Betül Kaçar, a astrobiology postdoctoral fellow in Georgia Tech’s NASA Center for Ribosomal Origins and Evolution, figured out where this ancient gene would go on modern E. coli chromosomes and in which sequence. Then Kaçar produced eight identical strains of E. coli with this old gene.

The chimeric version grew about twice as slowly as its modern counterpart, according to a news release from Georgia Tech. This was good news for evolutionary biologists who wanted to see what would happen next. Would life evolve like it already had over 500 million years, or would it take a different tack this time?

“This is as close as we can get to rewinding and replaying the molecular tape of life,” Kaçar said.

She and her colleagues allowed the bacteria to grow for 500 generations, and watched as their growth rates gradually increased. Eventually, some of them were even better off than their modern, unaltered cousins. Kaçar sequenced the offspring bacteria’s genomes to figure out how they adapted. It turns out the gene didn’t mutate to look more like its modern self — instead, the proteins that interact with this gene changed. Evolution took a different path this time.

This is interesting because evolutionary scientists want to know whether natural selection always leads to a single outcome, or whether nature can provide several solutions to a specific problem. This suggests it’s the latter, and that mother nature can be creative. The team plans to continue studying future E. coli generations to see if the protein will adapt in other new ways.