The genders are more alike than they are different, with one notable exception. 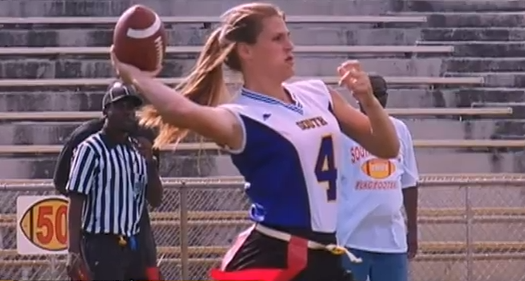 You don’t need to look any further than last week’s news cycle to see proof that a girl can throw a ball: Erin DiMeglio, the first female quarterback to play high school football in Florida, made a splash by taking a spot on her team. But some research indicates it’s an uphill battle.

It may be a borderline-offensive schoolyard taunt, but “throws like a girl” has an element of truth. Studies suggest that girls often don’t throw as well as boys. (Boys v. girls is a little diminutive, but it’s an important distinction; we’ll get to that.) In fact, the “throwing gap,” as it’s called, is one of the biggest differences between the genders. It’s not just the largest gap in physical activities–although it’s the largest gap in that field–it’s possibly the most salient gap. Period.

Literature on this put forward by Janet Hyde, professor of psychology and women’s studies at the University of Wisconsin at Madison, for example, has shown the disparity. Her Gender Similarities Hypothesis states, in short, that the two genders are more alike than they are different, and there’s a lot of data to support the idea. (You can, and should, read about how similar we are here.)

Before puberty, the physical differences between boys and girls (see?) aren’t enough to account for the throwing gap; structurally, their bodies should produce the same distance and speed in a throw. Nonetheless, girls are more likely to, for example, throw in a dart-tossing motion or step forward with the incorrect foot, which means a weaker throw. The age group from Hyde’s report still falls into post-pubescence, when those natural, physical differences in size and muscle can distort the data, but even at age 4, says Jerry Thomas, dean of the College of Education at the University of North Texas in Denton, the difference is three times higher than any other motor function. In the U.S., where we’re so proud of The National Pastime, the effect of doting parents vetting their boys while letting the girls slide on the skill has an effect–the same way it does anywhere baseball or other throwing-heavy sports are popular–but Thomas has researched this, too.

To account for the effects of nurturing, Thomas studied aboriginal children in Australia, who throw the same amount regardless of gender. The girls threw tennis balls at about eight-tenths the velocity of their male counterparts. In the U.S. that’s only slightly more pronounced, as The Washington Post points out, with girls throwing about 51 to 78 percent of the velocity. That suggests there’s some kind of explanation in addition to nurture.

Thomas pegs evolution for that, hypothesizing that throwing was the most important trait for hunting, and that the best (male) hunter was more likely to pass on his genes with the woman of his choosing. There’s no way to test that theory, of course–“It’s not one of those things you can go back and randomly assign people to groups and try to figure out”–but the other skills he studied, like running and jumping, would be more necessary for both sexes to use, so might account for why the gap is less pronounced today. Skills that might not be used as much by either sex, even ones as similar as underhand throwing, as opposed to ready-for-the-buffalo-slaying overhand, wouldn’t show the same difference.

So what, exactly, does an ideal throw look like? Thomas says it’s a three-pronged movement: a solid step forward; “differentiated rotation,” i.e. the movement of the hips; and the lag of the ball, when a longer stretch of the arm might produce a better throw. “It’s the only skill I know of that I can make a statement and everybody can tell me the mechanics of what it looks like: throws like a girl,” Thomas says. But nonetheless, a solid throw looks something, probably, like what high school quarterback Erin DiMeglio does.