FYI: Did Prehistoric Birds Evolve Flight By Falling Out of Trees?

Possibly. The trees-down (or “arboreal”) hypothesis has been around for many years, says evolutionary biologist Richard O. Prum of Yale... 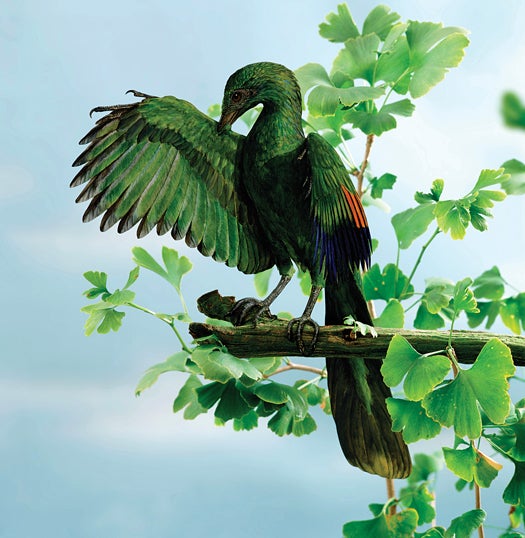 Archaeopteryx (Archaeopteryx lithographica), the earliest and most primitive bird known. It lived in the late Jurassic Period, around 150-145 million years ago. Jane Burton / Warren Photographic
SHARE

Possibly. The trees-down (or “arboreal”) hypothesis has been around for many years, says evolutionary biologist Richard O. Prum of Yale University. Researchers guessed that the scales of tree-dwelling Triassic reptiles elongated into feathers, which helped them leap away from predators. Once the proto-birds could glide, they were en route to avian flight. “It was like one big, crazy hairball of ideas all stuck together,” Prum says.

What’s wrong with the story? Scientists have largely worked out the origin of birds and feathers, two thirds of what Prum calls the “holy trinity” of evolutionary ornithology. In the 1970s, Yale professor John Ostrom developed anatomical evidence strongly suggesting that birds evolved from theropods such as Tyrannosaurus rex. Other research showed that feathers weren’t always for flying. Prum’s own research showed how reptilian scales might have evolved into elaborate, multicolored structures for social display, not for flight.

So the origin of flight, the final third of the holy trinity, remains a mystery. There are several theories about it, and many begin on the ground. For instance, the University of Montana’s Ken Dial uses high-speed digital cameras to film baby partridges as they clamber up steep inclines by flapping their half-formed wings. He proposed this “wing-assisted incline running” as an intermediate evolutionary step that may have helped birds eventually go from the ground to the air—not the other way around.

Ask Us Anything
Biology
Evolution
history