An inside look at the elusive platelet 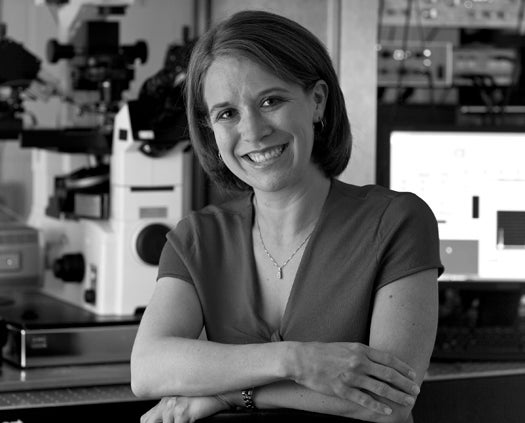 Human blood cells are fairly well understood. That’s not true of platelets, the tiny nucleus-free discs that circulate in the blood and play a key role in regulating clotting. Platelets are less than a fifth of the size of a typical red blood cell, and until University of Minnesota chemist Christy Haynes started studying them, scientists had no way to see what was happening inside.

Haynes’s lab is the first to success-fully isolate an individual platelet under a microscope, place a Christy Haynes
Age 35
University of Minnesotaminuscule electrode onto it, and measure the messenger molecules released when the cell is chemically stimulated. This technique has allowed Haynes a first glimpse into how platelets talk to each other and how scientists might manipulate them to control blood-clot formation, develop new therapeutic treatments for platelet disorders, and perhaps even stop the spread of tumor cells. “A lot of people think that platelets act like a Trojan horse,” Haynes says. “They circulate through your bloodstream, cloaking the cancer cell, and your body doesn’t detect it.”

In addition to studying platelets, Haynes is trying to create a model immune system on a chip that will clarify how immune-system cells communicate with one another. Her success, says her doctoral adviser, Richard P. Van Duyne of Northwestern University, is due to her rigorous and creative experiment design. “She has an enormous track record of being able to make experiments work on the first shot.”

Click here to see more from our 11th annual celebration of young researchers whose innovations will change the world.