Video: A Body-Cooling Glove Could Give Athletes a Better Boost Than Steroids

Almost all mammals have a network of veins near a hairless part of their skin that controls rapid temperature management–and... 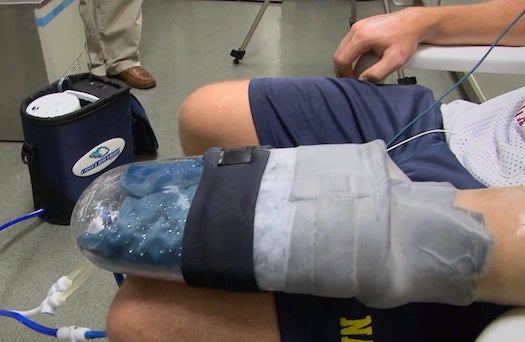 Almost all mammals have a network of veins near a hairless part of their skin that controls rapid temperature management–and it’s no different for people. For us it’s the palms (as opposed to, say, a dog’s dangling tongue). But like some other biological processes, the technique can be gamed, with engineering topping physiology. That’s the case with a body-cooling glove out of Stanford that researchers say might be more potent–and obviously much more legal–than steroids.

These hairless patches are the dominant places for heat transfer with the environment; take a thermal scan of a bear (carefully) and you can see the nose and feet light up. The networks of veins beneath the skin, called AVAs (arteriovenous anastomoses), let only negligible blood flow during cold weather (to keep a person insulated) but can account for as much as 60 percent of cardiac output during warm weather or exercise.

The glove plays off this reaction. We have other AVAs, but the palms are the most prominent, so that, of course, is where the glove does its work. The setup sounds simple: it doesn’t look like much more than a plastic glove hooked up to a portable cooler. But when a hand goes into the glove it creates a slight vacuum, which causes the veins in the palm to expand and draw blood through the AVAs. A lining of chilly water in the glove cools off the blood as it starts to circulate throughout the body.

The researchers claim that the cooling helps in recovering from exercise or competition so much that it could be more helpful to an athlete than steroids, and some teams–including the San Francisco 49ers, Oakland Raiders, and Manchester United–are using a version of the glove in the hopes that it really does.