Is the Developing World Poised for an Electric-Vehicle Boom?

That's what some experts here at the Lithium Supply and Markets conference believe, and if they're right, it could be good for everyone 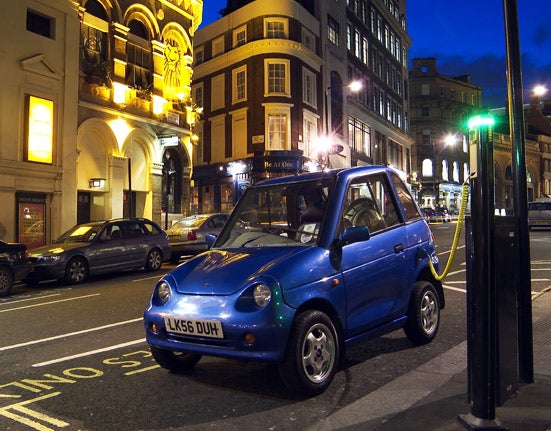 If you had to separate the speakers at this year’s Lithium Supply and Markets conference into two camps, you could do it like this: There are those who believe that the electrification of the automobile will proceed at a steady, orderly pace, and that over the next 10 or 15 years the world’s lithium producers together to mine and process an additional 7 or so percent each year. Then there are those who believe anything could happen–who think this kind of orderly extrapolation is blindly conservative. And generally, these optimists–who believe that there’s no telling how quickly electrically-powered vehicles of all kinds will spread, but that it’ll probably be far more dramatic than most forecasters expect–happen to do business in either China or India.

Yesterday, for example, Iggy Tan, managing director of the Australian lithium producer Galaxy Resources, excoriated the analyst from TRU who earlier in the day had predicted that lithium suppliers were on track to produce dramatically more lithium over the next several years than the electric-car-battery industry would require. As a result, many of these suppliers would go bankrupt. Tan called the presentation “spreadsheet bull,” a piece of grossly misguided fearmongering that completely failed to take into account the world’s two great wild cards: China and India.

Tan, whose company is set to build an electric-bike-battery factory in China, made much the same argument at last year’s conference. Today in China, millions of people get around on electric bikes. Tan expects those bikes to quickly switch from lead-acid to lithium-ion batteries, mostly because of government-mandated weight restrictions. Nearly 30 million e-bikes are sold in China every year. This, Tan argues, is the kind of enormous new market that most analyses of the future of the electric vehicle fail to take into account. And it’s an important variable: Arguably the biggest problem with electric vehicles today is that the high cost of the batteries makes them inordinately expensive. What would make the batteries cheaper? Building them on a much larger scale. E-bikes obviously require a much smaller and less sophisticated battery than, say, the Chevy Volt, but they require something much more like an electric-car battery than does a laptop, and a proliferation of the lithium-ion powered e-bike could do very good things for the electric-vehicle market as a whole.

This afternoon the optimism came via India, in a speech by Anupam Bhattacharjee of the Indian manufacturing conglomerate Mahindra and Mahindra. He pleaded with the audience: “Please don’t be so conservative” in your expectations for the future. Instead, keep in mind developing economies and what they mean for the EV market.

The thought of infrastructure-poor India becoming a major electric-vehicle market might seem far-fetched, but according to Bhattacharjee, it’s not. In fact, the government is already steering the country in that direction. Two months ago, he says, the Ministry of New and Renewable energy announced major incentives for people who either buy an electric vehicle or convert their gas car to run electric. Those incentives include a $2225 credit for the purchase of an EV; 80 percent depreciation of that purchase in the first year (mainly for commercial buyers); a lower road tax and Value Added Tax; and other financial incentives. Charging infrastructure is planned for railway stations, highways, shopping malls. Once built, the Tata Tower residential complex, planned for Mumbai, will have 4,050 EV parking stations. And so on. Currently, Bhattacharjee says, the combined government incentives actually make the purchase of a gas-powered car 42 percent more expensive than a comparable EV. Mahindra is also bullish on conversions–taking gas-powered cars and converting them to run on electricity. He thinks it’s possible to convert 1 million gas cars to electric drive by 2020. (One million is a popular number: The Chinese government wants the country to make 1 million electric cars a year by 2020.)

All of these numbers are speculative, of course. No one knows exactly how the electrification of the automobile is going to happen. But as Tan and Bhattacharjee reminded us, the possibilities in the developing world are enormous, and could have positive repercussions for plug-in vehicles everywhere.