Never Mind the Naysayers: The Chevy Volt is Excellent

Behind the wheel, we find that GM’s highest-profile concept car has become a refreshing, radically different kind of production vehicle 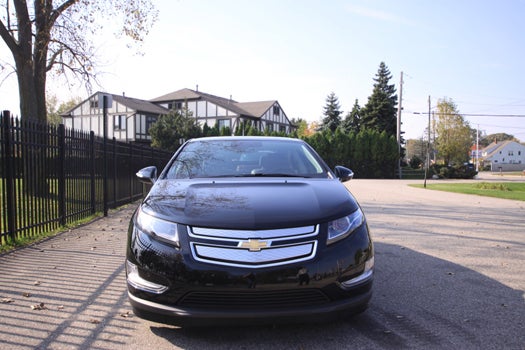 That the Chevy Volt exists at all is something of a miracle. The project, which was announced at the Detroit Auto Show nearly four years ago and goes into production next month, has survived two CEO shakeups, major bankruptcy, and an unprecedented rescue by the Federal government. For every wave of goodwill, the Volt has endured a backlash of bile and skepticism. By now, the car has become a political football, a proxy for anger over the bailout of GM and Chrysler and a symbol of the future of the American auto industry. That’s a lot of baggage for a compact car to carry. And it’s a remarkable amount of baggage to accumulate before anyone even knew how the finished car would drive.

Now, after several hours and nearly 200 miles driving and riding in saleable Volts, we know how the finished product drives. And the news is very good.

The Volt launches from a stop with a punch that makes the car feel faster than its 0-to-60 time of 8.8 seconds would suggest. Around town it is solid, silent, and quick. At 85 mph it feels unshakeable, with plenty of passing power to spare. (Top speed is limited to 100 mph.) It is not light by any stretch, but its low center of gravity (which comes the 400-pound lithium-ion battery situated underneath the center console and back seat) makes it feel nimble. We squealed the tires on hard turns a few times, but never did it start to slide. Steering is silky and precise.

The loaded Volt is comfortable and pleasant to sit in, with soft leather seats, a leather-wrapped steering wheel, a sophisticated touch-screen navigation system (which also offers a vast amount of data about your driving efficiency), rear backup camera, seat warmers, cruise control, Bluetooth, iPod connectivity, and the rest of the usual upgrade amenities. It’s not spacious, but it doesn’t feel cramped; I spent my time in the car with two other sub-six-foot adults, and I never heard anyone complain about legroom, even in the back.

So GM has succeeded in making the Volt a perfectly solid, nicely appointed production car, never glitchy or cut-rate or compromised in any way. Good. For a car that starts at $41,500, this level of fit and finish should be the minimum.

But the Volt, of course, is not just any production car. Let’s start with the pure-electric (EV) mode. GM long said that the Volt would get 40 miles of gas-free driving on a full charge of its 16 kilowatt-hour battery. They recently replaced the number “40” with a range of 25 to 50 miles, and after spending time in the car I see why. The first leg of my trip was a 45.9-mile drive through the Detroit suburbs—no highway driving, many stoplights, an average speed limit of 45 mph. I made a reasonable effort to drive efficiently, which the Volt turns into a subtle and surprisingly compelling game; when the green bouncing ball that sits just below eye level is sitting still in the middle of a digital column, you’re doing well. And you don’t have to drive like a hypermiler to do well: Just don’t floor it from a stop, and let the regenerative braking (which is all but imperceptible and starts as soon as you lift your foot off the throttle) do as much of the deceleration work as possible. I made the 45-mile drive in pure electric mode with 6 miles left on the battery meter,. The next day, on the first leg of a 155.7-mile route, we did several miles of 80-plus-mph freeway driving, switched it for several miles to “sport” mode and generally tried to push it as much as we could given that we were driving in town, and we got a little over 37 miles of all-electric range.

After that, the battery was “customer empty”—the Volt’s software only allows it to use 65 percent of the battery’s capacity, a conservative decision meant to keep the battery running well for the extent of its eight-year, 100,000-mile warranty. At this point, the 1.4-liter, four-cylinder internal combustion starts up, to generate electricity for the battery. Initially, the transition between modes is seamless. You don’t hear or feel it as much as you suspect that that the gas engine is running.

Drive for a while in charge-sustaining mode, however, and you’ll eventually hear the RPMs rise, most likely under heavy acceleration. It’s a strange sensation, because the link between the movement of your foot and the sound of the engine is correlated but indirect—it’s muted and delayed. The car “leads with the battery,” meaning that even in charge-sustaining mode, the electric motor draws electricity from the battery; the engine then follows to replenish those electrons. In other words, when you punch the throttle from a complete stop, you’ll get to 20 mph on battery power alone, and then you’ll hear the engine rev up to a little over 3,000 rpm, but it’s not the direct relationship between engine noise and foot action that we’re accustomed to: The engine has a mind of its own, a software system that runs it as needed to supply electricity.

Charge-sustaining mode exposes one of the car’s few disappointments: weaker-than-expected gas mileage once the battery is down. I had long expected this mode to deliver some 50 mpg on average, and it’s possible to get there, but you have to earn it. My co-driver did a 10-mile stretch of aggressive hypermiling—windows up, no AC, slooooow acceleration, coasting whenever possible—and got above 51 mpg. Driving normally, I got 37.1 mpg over a 38-mile stretch that included some two-lane highway.

But these mid-30s mpg figures are misleading on their own. Remember, the first 40 or so miles come gas-free. If you drive 40 or so miles a day during the work week and charge the battery completely every night, you could theoretically never use gasoline unless you take the Volt on a longer trip.

Aside from its steep price (primarily due of the great expense of its massive lithium-ion battery pack) the thing about the Volt that has disappointed people the most is this week’s revelation that, in certain circumstances, the gas engine can, along with the electric motor, mechanically couple to the gears that drive the wheels.

Here’s how it works: In charge-sustaining mode, at 70 mph or above, the gasoline engine—which normally powers a second, smaller electric motor that acts like a generator—can connect to the gearset that drives the wheels. Doing so allows the larger, primary electric motor (which always turns the wheels, in all modes) to run at lower RPMs. At high speeds, with the battery depleted, this arrangement is 10-15 percent more efficient, and efficiency is, after all, the whole point of the Volt.

I’m not going to chase down every executive statement over the years on the nature of the powertrain and parse them to figure out whether GM “lied” (which is the charge that has spread across the Web this week), or whether they were technically always telling the truth (which is what GM maintains). And the reason is simply that I don’t care. Yes, you can argue that GM was misleading about the true nature of one of the Volt powertrain’s four operating modes. GM’s defense is that they’ve been waiting on the patent to clear on the technology and couldn’t talk about it for competitive reasons. Whatever. This strikes me as an esoteric non-issue that in no way changes what really matters, which is the performance of the car. And the Volt was never going to pass the electric-car purity test—since the very beginning we’ve known that it would have a gas engine on board.

During my test drive, my copilot and I tried repeatedly to feel or hear any difference in the car’s performance in charge-sustaining mode above 70 mph. We couldn’t. This is an esoteric engineering matter that happens automatically, deep within the car.

At the end of our full-day drive, a GM rep shrewdly handed over the keys to a 2010 Prius, a car I had driven before and enjoyed. The Prius is roomier than the Volt, but as soon as I turned on the ignition and started moving, the gas engine loudly snapped on, making me long for the comparatively silent, gliding operation of the Volt. The steering felt stiff, the transitions between battery and parallel power jarring. The Prius, of course, is cheaper, but not radically so.

This points to the Volt’s biggest weakness: Its $41,000 base price tag. Even after the $7,500 federal tax credit, the Volt is for the kind of person who is willing to shell out for a four-passenger car that isn’t from Germany. The car is so pleasant to drive that I can’t imagine finding early adopters to be a problem. But after that, I’d like to see the Volt become available to the rest of us. Which is why we should hope for a kind of EV arms race, for a significant drop in battery prices and a rapid expansion of plug-in infrastructure. Because after putting a couple dozen highway miles on a vehicle like the Volt, plenty of people simply won’t want to go back to a conventional car. 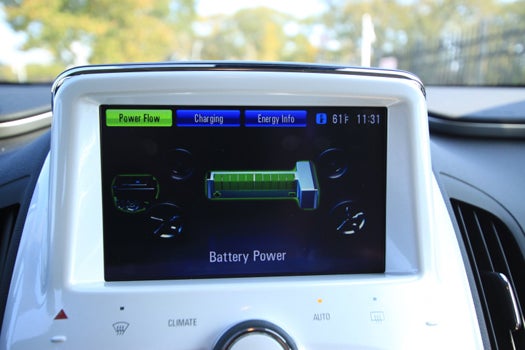 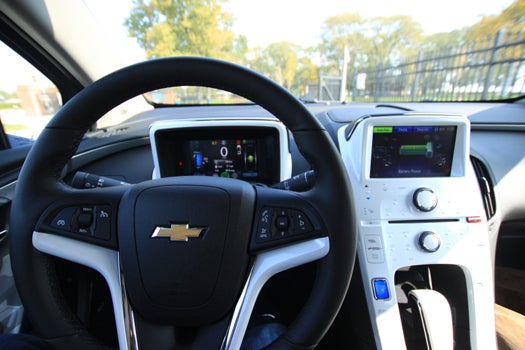 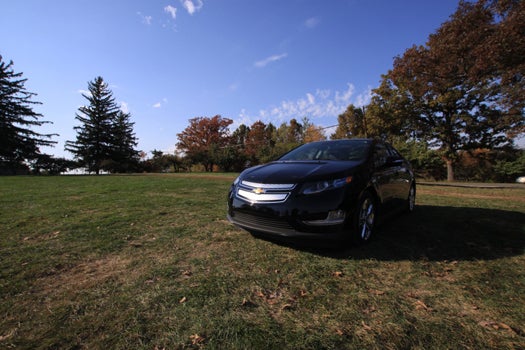 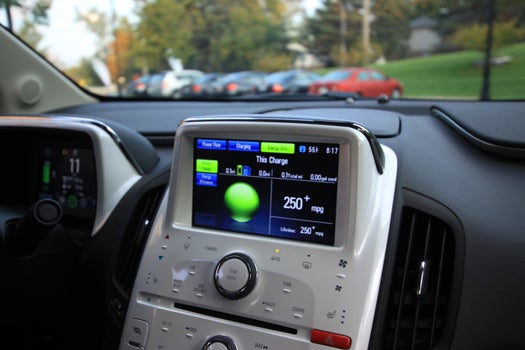 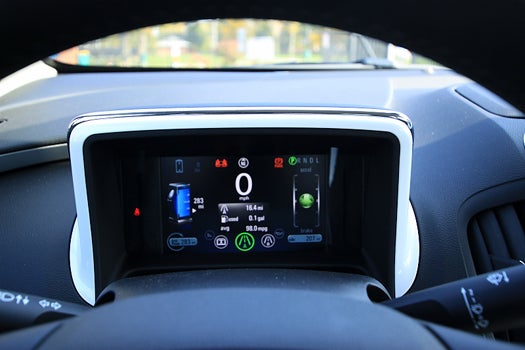 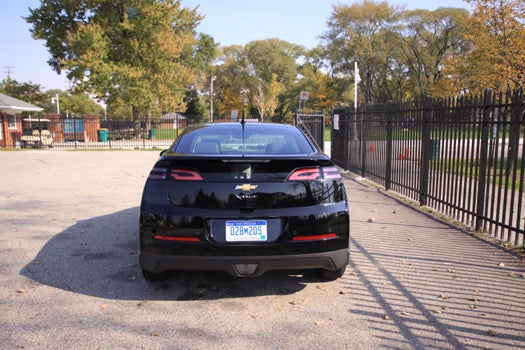