The Detroit Auto Show is kicking off this morning, and the first big news from the showroom is the Porsche... 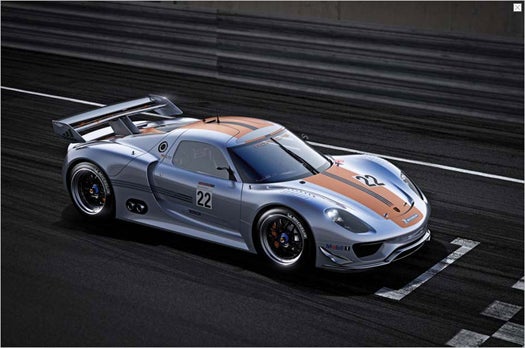 The Detroit Auto Show is kicking off this morning, and the first big news from the showroom is the Porsche 918 RSR, a hybrid supercar that not only takes design cues from sexy predecessors like the 911, the 908, and of course the 918 Spyder, but that churns out a whopping 767 horsepower between its gasoline and electric-powered motors.

The reinforced carbon fiber body of the 918 RSR hides some interesting tricks behind its muscular wheel-wells and aerodynamic curvature. Under the hood, a 10,300 RPM direct injected V8 provides the 918 RSR with its primary thrust to the tune of 563 horsepower. But each of the front wheels contributes an additional 75 kW of electric power to the racer, resulting in a total accumulated 767 horsepower at peak drive.

Then there’s the flywheel accumulator: located next to the driver where the passenger seat would sit, the flywheel stores up energy captured when the vehicle brakes. That energy can be accessed by the two 102-horsepower electric engines with the touch of a botton, providing a burst of acceleration when needed.

When might that power be necessary? Porsche isn’t saying exactly when or where the 918 RSR hybrid will race, but it is designed for events like the LeMans 24-hour race, and in road rallies like that an extra burst of stored energy would facilitate passing maneuvers as well as provide a means to give drivers trying to pass the RSR the symbolic middle finger.

We’ve included renders from Porsche above and below, but Inhabitat has a fantastic gallery of the car on the showroom floor in Detroit. 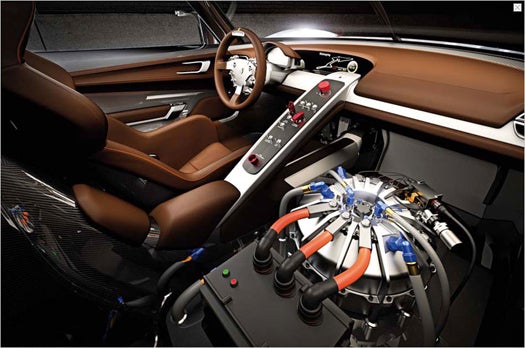