The Internal Combustion Engine Is Not Dead

Electric cars haven’t killed the engine as we know it, yet. In fact, the century-old technology is getting stronger every year 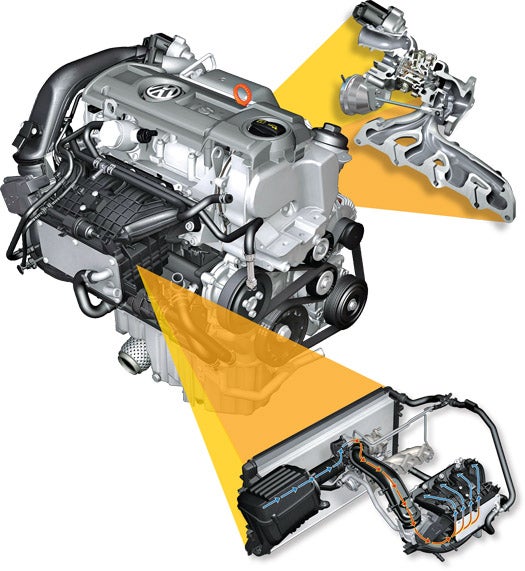 With all the focus on hybrids and electric cars, you might assume that the internal combustion (IC) engine was headed for extinction. Yet more than 99 percent of the world’s new cars still use one. That includes conventional hybrids, whose batteries and electric motors derive their energy entirely from gasoline. Even those automakers who are most bullish on alternative energy say that the IC engine will remain their primary propulsion system for decades.

And that’s not necessarily bad news. Some IC powerplants achieve near-zero emissions of pollution-generating compounds (they will still emit carbon dioxide), while others can generate 600 horsepower more efficiently than ever. As governments begin regulating CO2 emissions, the latest trend sees automakers downsizing engines without losing the power and smoothness that drivers expect. Here, three intriguing approaches that will reach showrooms around the globe in the coming years. 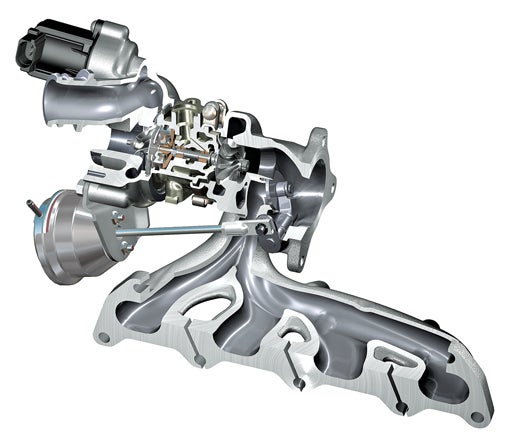 Powered by hot exhaust, a turbine spins a pump, compressing air and feeding it into the cylinders.

Pros: Power in a small package
Cons: Mechanical complexity; tiny engines are a hard sell in the U.S. market

Superchargers and turbochargers are like steroids for IC engines, forcing pressurized air into cylinders to boost power and efficiency. More air allows more fuel to be added, creating bonus horsepower without requiring a bigger engine and more cylinders. For decades, these “forced-induction” technologies had been an either-or proposition—you could turbocharge the engine or you could supercharge it, but you couldn’t do both. Then Volkswagen created the first mass-produced engine that uses both to squeeze the most power out of the least engine: the Twincharger 1.4 TSI.

The supercharger, whose air compressor is driven by a belt attached to the engine, can boost power even at the extremely low engine speeds where a turbocharger—whose turbine is driven by a car’s spent exhaust gases—can’t generate useful thrust. But on the Twincharger, as engine speeds climb into the turbo’s sweet spot, the supercharger lets the turbo take over. Making the constant handoff between turbo- and supercharger undetectable to the driver was the Twincharger’s challenge, requiring the kind of complex computer engine controls that didn’t exist even a few years ago.

The 1.4-liter four-cylinder engine delivers up to 172 horsepower, more than many engines that are 50 percent bigger. Yet the Twincharger still manages close to 45 miles per gallon on the highway in European models like the Golf hatchback.

With Americans spoiled by relatively cheap gasoline, VW doesn’t see a big Twincharger market here for now. But that could change with the next big spike in gas prices, says Stuart Johnson, who manages VW’s engineering and environmental office. The company is also developing a Jetta Hybrid that mates a turbocharged engine with an electric motor and battery pack, which it could bring to the U.S. market by 2012. 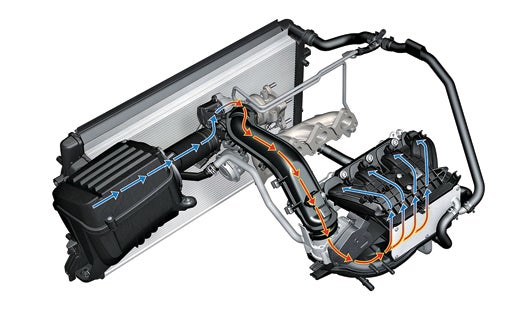 Outside air travels through a filter, a compressor and an intercooler before entering the cylinders.

A Diesel-Like Engine Without the Diesel Pollution

ETA: Second Half of this Decade

Diesel engines are efficient in part because of the high energy density of the fuel. Just compress air and a squirt of diesel in the engine cylinder, and it auto-ignites with no spark. But diesel requires pricey new emissions gear to scrub pollutants from the exhaust gases. Now comes a powerplant that works like a diesel engine but runs on cleaner gasoline. Called the homogeneous charge compression ignition (HCCI) engine, it offers about 15 percent better mileage than a conventional gas engine.

Gasoline can be made to auto-ignite, but the combustion is notoriously difficult to control. HCCI engines typically function by mixing precise quantities of fresh air and burned exhaust gases (the heat from the exhaust helps drive the auto-ignition) inside the cylinder. Making an HCCI engine work smoothly required every modern advance in IC power, including complex variable valve timing and direct fuel injection. Both GM and VW have made gasoline HCCI engines, and GM is currently testing its engine in prototypes in Detroit and Germany.

Fuel Economy at a Premium

ETA: Late next year, Europe only

Hybrids are especially suited to city driving, where their electric motors are efficient in slowpoke traffic. Diesel’s fuel economy shines on the highway. Now Mercedes will combine both in the world’s first production diesel hybrid. The E 300 BlueTec Hybrid sedan goes on sale in Europe late next year. Pairing an efficient 2.2-liter, 204-horsepower diesel with an electric motor and a lithium-ion battery, this version of the E-Class sedan should get 58 miles per gallon. The E 300 BlueTec Hybrid emits about one third less CO2 than the typical new car. Alas, diesel and hybrid cars already cost more than gasoline models, so dropping both into a single car adds thousands of dollars to the cost of the car.