(But don't try this at home) 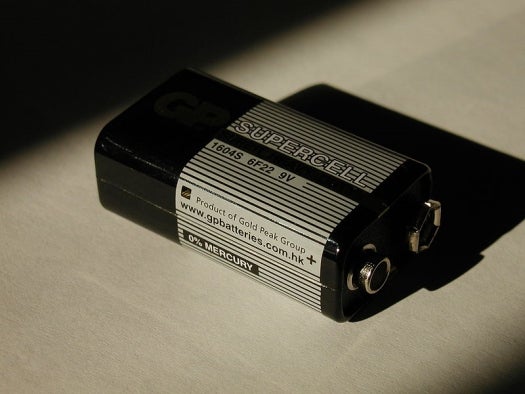 We’ve already seen how magnets hovering close to a person’s head can affect speech, behavior and learning patterns. Now it appears zapping your brain with a 9-volt battery will make you better at video games, at least according to one researcher. Don’t try this yourself, though.

Neuroscientists at the University of New Mexico asked volunteers to play a video game called “DARWARS Ambush!”, developed to help train American military personnel. Half of the players received 2 milliamps of electricity to the scalp, using a device powered by a simple 9-volt battery, and they played twice as well as those receiving a much tinier jolt. The DARPA-funded study suggests direct current applied to the brain could improve learning.

This type of brain stimulation, called transcranial direct current stimulation (tDCS), is controversial but could show promise for treatment of various neurological disorders and cognitive impairments. Click through to Nature News for a thorough overview.

It’s different from transcranial magnetic stimulation, in which a magnetic coil running at high voltage is positioned close to the head. The magnets stimulate electrical responses in the brain. Transcranial direct current stimulation is just what it sounds, applying the current directly to the brain.

We’ve been hearing quite a lot about these methods lately, and the scientific literature indicates the fields — tDCS in particular — are experiencing a revival, Nature News points out. Scientists hope the methods could be used to treat depression, post-traumatic stress disorder, stroke and autism, as well as to improve learning by increasing the brain’s plasticity.

Researchers are beginning to understand how an external electrical current affects brain function, including by inducing changes to the flow of electricity across neurons and increasing the expression of certain synapse proteins.

Apparently, it takes very little electricity to do all this. But please, don’t start hooking up 9-volt batteries to your brain — leave that to the scientific studies.