How It Works: The Most Advanced Gas-Powered R/C Car

This 18-inch off-roader is made for play. But it packs an engine, starter and sensor system that are just like a real racecar’s—at a tenth of the size 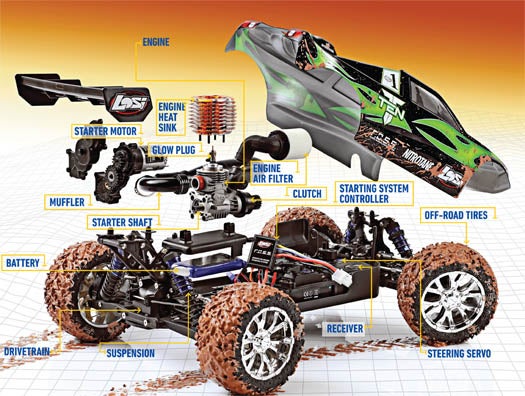 Gas-powered remote-control cars provide realistic racing fun. They burn a gasoline-like fuel called nitro (made of methanol, nitromethane and lubricant) with miniature internal combustion engines. Losi’s Ten-T gets even more authentic by adding a starter that works like a diesel engine’s. Nitro cars are usually hard to start: You have to pick them up, use a hand-held motor to spin the engine, and simultaneously work the remote’s throttle. With the Ten-T you just hit “start” on the remote.

That turns on the car’s own electric motor, powered by a 7.4-volt lithium-polymer battery. The motor turns a starter shaft behind the engine, which spins the crankshaft until the engine’s suction draws in fuel. Meanwhile, the battery also lights a glow plug, similar to a spark plug, in the engine. The plug’s hot element, combined with the compression of the fuel-air mixture when the piston rises, ignites the fuel. Then the plug keeps glowing, and the fuel keeps burning, until you’re ready to call it quits.

Design Highlights on the R/C Car

Telemetry:The Ten-T is among the first R/C vehicles to come with a built-in telemetry system, similar to those in a pro racecar. Sensors on the car continuously beam data on speed, temperature and battery voltage to a display on the remote.

Fuel Tank: The 2.5-ounce tank includes a weighted pickup tube that follows the liquid as it sloshes around, ensuring that it can grab and deliver fuel even when the car drives up a steep hill. A full tank runs the engine for about 10 minutes (standard for high-power nitro cars), and it’s refueled from a squeeze bottle.

Engine: The single-cylinder, 3.4cc engine provides 1.8 horsepower, enough to send the 6.2-pound car up to 45 mph in a few seconds.

Drivetrain: In the four-wheel-drive vehicle, the engine transmits power to the wheels by engaging a clutch and kicking off a series of gearsets that lets each wheel spin at a different speed. Dual disc brakes stop both the front and rear axles.

Suspension: The front and rear suspensions are adjustable to tackle many terrains. Shifting the control arm alters ride height, camber (the vertical angle of the wheels) and toe-in (the degree they point in or out). Turning a collar on the oil-filled shocks changes springiness.

Steering Servo: This small, high-torque electric motor moves the wheels’ control arms. You can tweak its movement from the transmitter — for instance, to alter the distance it turns with each command or limit the steering angle to speed over straight tracks.

See the world’s deepest drill, the Taser shotgun, and more of How It Works