The Surprising Origin Of Earth’s Gold

New observations suggest your jewelry may have originated from colliding stars. Twinkle, twinkle! 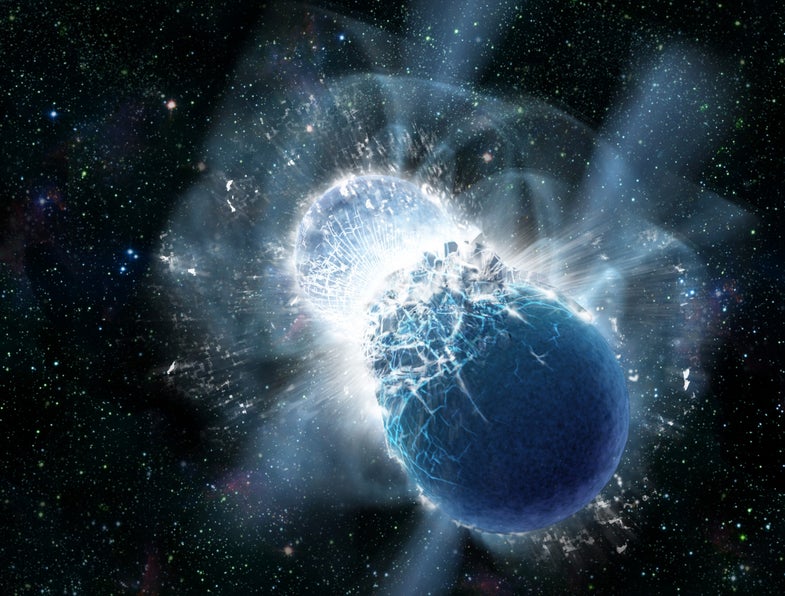 Pirates have hunted it. Monarchs have exploited it. Jewelers have sold it. But where did gold come from?

Research by the Harvard-Smithsonian Center for Astrophysics (CfA) suggests that the Earth’s supply of gold originated from collisions of dead stars.

The research is based on recent observations of a nearby gamma-ray burst, GRB 130603B. Gamma-ray bursts are flashes of high-energy light (gamma rays), associated with explosions. Researchers believe GRB 130603B resulted from the collision of two neutron stars–deceased cores of stars that have previously exploded.

In GRB 130603B, researchers observed a burst of light lasting two-tenths of a second, then a glow dominated by infrared light, which radiated from the area for several days. The glow exhibited unusual behavior. Per the press release:

Its brightness and behavior didn’t match a typical ‘afterglow,’ which is created when a high-speed jet of particles slams into the surrounding environment. Instead, the glow behaved like it came from exotic radioactive elements.

The team believes that significant quantities of various heavy elements, such as gold, were created and suspended within that area.

“We estimate that the amount of gold produced and ejected during the merger of the two neutron stars may be as large as 10 moon masses–quite a lot of bling!” lead author Edo Berger said in a statement.

Given the frequency of GRBs, Berger and his colleagues hypothesize that all of the universe’s gold could have originated from these events.