We detect a plasmaspheric breeze. 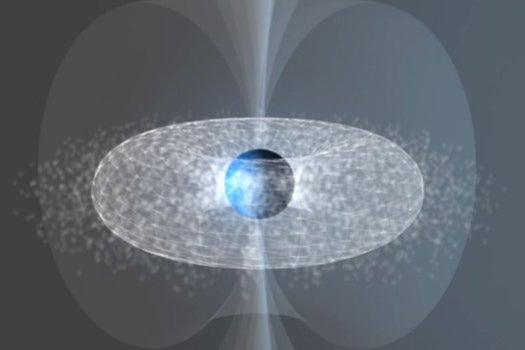 More than 20 years ago, researchers proposed the existence of a space wind–a steady flow of charged particles–inside the Earth’s magnetosphere, the region of space governed by our magnetic field. After years of theoretical work, Iannis Dandouras, an astrophysicist from the University of Toulouse in France, has directly detected this plasma wind in data from the European Space Agency’s Cluster spacecraft.

This cool space breeze is made up of material from the plasmasphere— basically a giant space donut of dense, cold plasma that wraps around the Earth, with us as its donut hole. The material in the plasmasphere doesn’t always stay put in its neat, donut-like shape, with some plasma escaping in plumes out toward the magnetosphere, the larger surrounding bubble of the Earth’s magnetic field.

The steady plasmaspheric wind, caused by an imbalance between gravitational, centrifugal and pressure gradient forces, sweeps about a kilo of plasmaspheric material out toward the magnetosphere every second, at speeds of more than 5,000 km per hour. It’s always active, unlike the plasma plumes, which are governed by geomagnetic activity coming from the Sun. Due to the wind, the plasmasphere loses up to 90 tons of material every day.

After a disturbance in the Earth’s magnetic field causes plasmaspheric material to leak out, the plasmasphere will eventually refill, but the constant outflow explains why it might happen more slowly than one would expect. “Due to the plasmaspheric wind, supplying plasma – from the upper atmosphere below it – to refill the plasmasphere is like pouring matter into a leaky container,” Dandouras explains in a statement.

It’s likely that other planets also have similar winds that would transfer some of their atmospheric material into surrounding space.