Felix Baumgartner skydived to a picture-perfect landing from 24 miles above the Earth on Sunday morning, tentatively setting three world records—but not before a hairy two-hour ascent. Here’s what happened with his helmet. 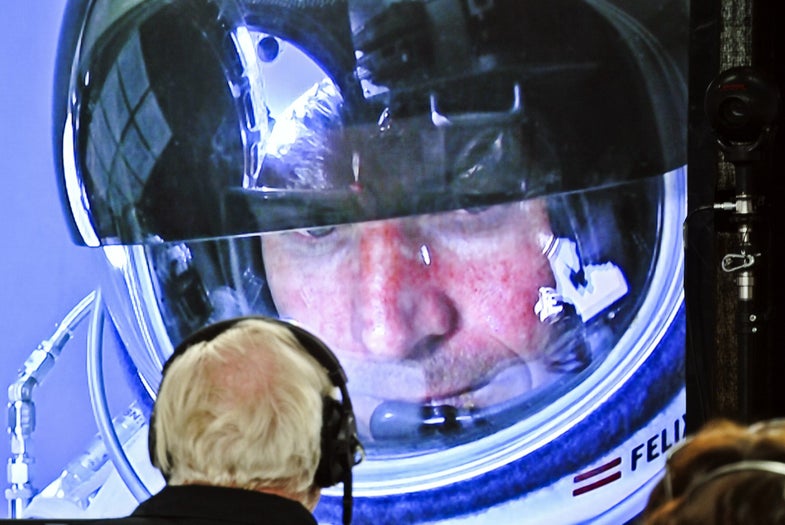 Pilot Felix Baumgartner of Austria seen in a screen at mission control center in the capsule during the final manned flight for Red Bull Stratos in Roswell, New Mexico, USA on October 14, 2012. // Stefan Aufschnaiter/Red Bull Content Pool // P-20121014-00043 // Usage for editorial use only // Please go to www.redbullcontentpool.com for further information. //.
SHARE

As if Felix Baumgartner’s supersonic skydive didn’t have enough built-in tension, his ascent to 128,100 feet on Sunday morning was plagued by an unexpected complication: a problem with his faceplate. Anyone listening to the live feed on Sunday would have heard Felix tell mission control that he didn’t think he had sufficient heat—and then the conversation between Felix and mission control abruptly ended. Joe Kittinger uttered a code word that cued the broadcast trucks to cut the feed. So what exactly happened?

In short: They nearly aborted the mission. As he ascended up through 80,000 feet, Felix indicated that he wasn’t feeling the faceplate heating system kick in properly. When Felix exited the capsule, he would be falling through temperatures as low as minus 60 degrees Fahrenheit. And he needs to see the horizon in order to maneuver into a stable position.

“The worst thing that can happen to a guy is a faceplate that doesn’t work,” Kittinger says now. “Heat is required to keep that faceplate from freezing over. Think about this: He has no idea where he is, no visible help; he’s just a bomb that’s falling through the air that can spin and tumble violently. The only way he knows what altitude he’s at is when pressure suit deflates at 35,000 feet. Because he’s blind, absolutely blind.”

If he can’t see his wrist altimeter, Felix has been trained to count to 60 after he feels his suit depressurize and then pull his parachute; that’s when he’ll be in an environment with enough oxygen to breathe (there’s only 10 minute worth in his bailout bottles). But if he had blacked out— as Kittinger had on his first Project Excelsior jump—and if for some reason his automatic chute opener didn’t go off, he could impact the ground.

“If you start talking about that problem when you’re out on that step,” Felix says, it’s too late. “I’m already released from ship’s system, and that means I only have 10 minutes of oxygen. You better know what you want to do way before that. I have to put it in my memory because you cannot think and come up with decisions while you freefall. It’s just too fast and too overwhelming.”

Art Thompson, the project’s technical director, quickly gathered his team in mission control, including two representatives of the David Clark Company, which built Felix’s suit. The faceplate heating system is powered by the capsule on the way up and by a battery in Felix’s chest pack on the way down. That’s one of the innovations to this spacesuit. U-2 pilots actually eject in their seats, kicking out of them only when they descend to 15,500 feet; the seat contains the battery pack that heats the pilot’s faceplate, says Dan McCarter from David Clark. The Stratos team needed to figure out the source of Felix’s problem: Was it the visor itself or the capsule’s electrical system? Or a third possibility: his visor wasn’t frosting, but simply fogging up as he exhaled?

“We came up with the plan to disconnect from the capsule system and go on the chest pack to verify that the system could go to full heat,” Thompson says. But that meant also disconnecting from the capsule communications system—and because Felix’s radio antennas are on his legs, and he was still sitting in a fully pressurized capsule, they didn’t know if they would be able to reconnect with him. As it turned out, the visor worked, and they were able to communicate. But by now they were at roughly 112,000 feet.

Mission control presented Felix with options, which included riding the capsule back down under its recovery parachute; it would be a rough landing but a survivable one. “We talked back and forth and we finally came up with a solution,” Felix says. If he stepped out of the capsule and his visor began to freeze, he could release his drogue chute after 30 seconds of falling, which should stabilize any uncontrolled spinning and safely deliver him to 35,000 feet still conscious.

It was a calculated risk he was willing to take. “It’s a team decision but at the very end I have to make that call because it’s my life,” he says.