How Pebble’s CEO Plans To Win The SmartWatch Wars

Eric Migicovsky's not afraid of Apple 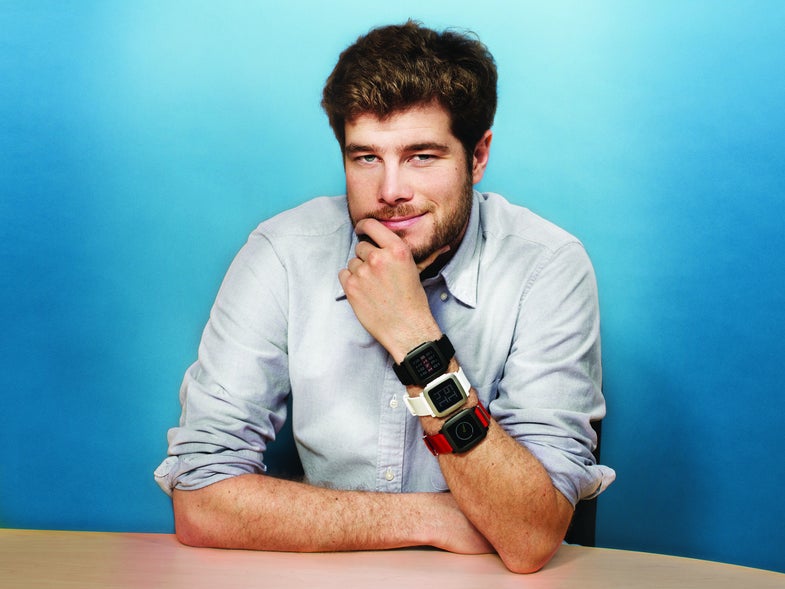 It only took Pebble Time 49 minutes to raise its first $1 million on Kickstarter. Photograph by Cody Pickens
SHARE

Long before Apple dove into the smartwatch business this spring, a little company called Pebble made a big splash–and set a $10-million Kickstarter record–by debuting an intelligent timepiece that provides emails, texts, and music controls. Pebble Time, its newest iteration, ships this month and builds on the original with a color e-paper display and a built-in mic. But after Apple’s gorilla-size entry into the market, can Pebble stand its ground? Eric Migicovsky, the company’s founder and CEO, gives us his view–and advice for his new competitors.

Popular Science: First things first. Why did you make crowdfunding and open source part of your strategy?

Eric Migicovsky: We were a small company–only five people. When we launched, on Kickstarter, people all over the world pumped our tiny project up to a scale we had never imagined. But more important, they spotted a product area that was completely new. No one was talking about smartwatches in 2012, except for these people. Our users gave us immense feedback, helped show what was working, what wasn’t. That guided us and directly influenced what Pebble Time is.

PS: So do you have advice for them?

PS: What are some of the trade-offs for smartwatch wearers?

EM: It doesn’t replace your phone, first off. You can’t make calls from our watch. Though, when you think about it, that’s not what a watch should do. You have a phone for that. What a watch does is tell time, and that’s the way it’s been for the last 100 years. We’ve added this extra layer of context alongside time. Because 8 a.m. means something different for different people. And Pebble Time helps you get information that’s personal to you, that’s important to you, throughout your day.

PS: What do you think the future holds for smartwatches?

EM: We’re in the early days of smartwatches. But I’m excited about the future. If you looked at smartphones in 2007, would you have predicted things like Uber? Spotify? Instagram? We’re at the same point with Pebble, where we’re doing these crazy things that people love, but there’s so much opportunity.

PS: How has wearing a smartwatch affected your life?

EM: I’ve been wearing a smartwatch for five years; it’s become incredibly intertwined with how I work. I rarely take out my phone to check emails. If something important comes through, I see it. But more than anything, it allows me to relax and know that I have something else that’s helping me get stuff done.

PS: Which watch did you wear before you invented Pebble?

EM: The funny thing is, I didn’t actually wear a watch before starting a smartwatch company.

This article was originally published in the May 2015 issue of Popular Science, under the title “How Pebble’s CEO Plans To Win The SmartWatch Wars.”