For ten grand, your own low-altitude spyplane 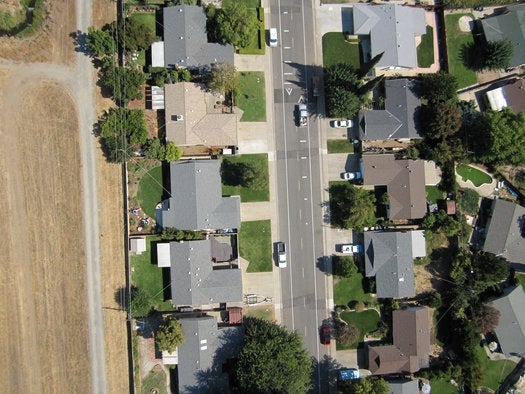 When I was invited to test-fly SenseFly’s Swinglet surveillance drone, I was ecstatic. It was an assignment suitable for James Bond: check out a programmable, unmanned platform for taking surreptitious aerial photos.

Under the guidance of the company’s representative, I unpacked the drone, programmed it with a spy mission, and sent it aloft to survey the neighborhood. You can learn some very interesting stuff by observing from your own private low-altitude spyplane, it turns out.

Check out the gallery.

You can define a flight path for the drone, and it flies at 30 mph, navigating via GPS, and takes impressive aerial photographs with its onboard 12MP camera or any sort of sensor you want to send up.

The Swinglet drone and software sells for $10,600 directly from the Sensefly website. That price includes the case, a camera, and two batteries. 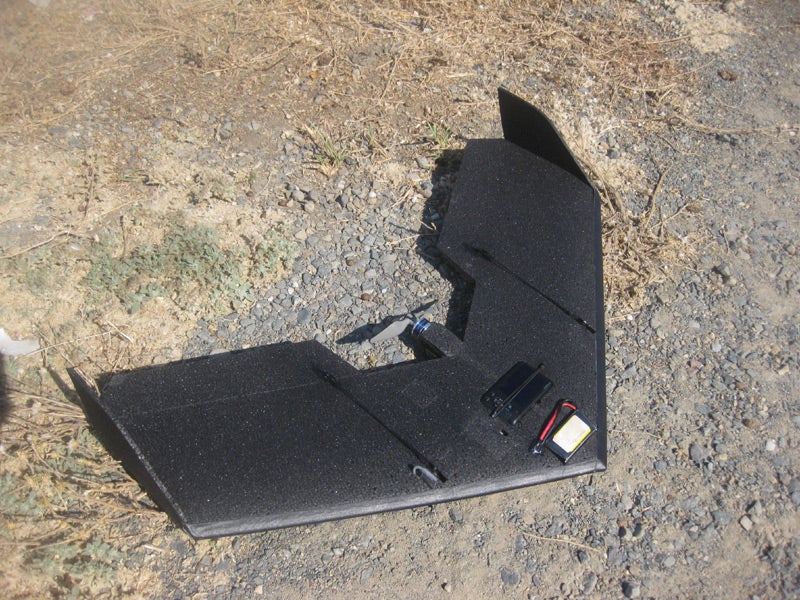 The Swinglet cameradrone is a simple machine with a complex brain. Here it is before takeoff. 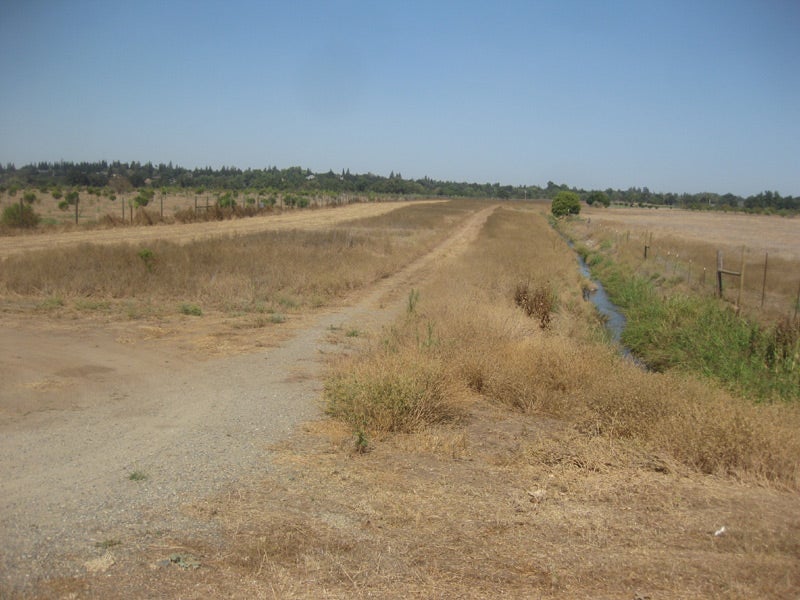 The most interesting aerial photographs tend to be the highest risk for flying cameras, but my host was confident. We agreed to launch the plane in a field and direct it over a creek and across a neighborhood of single family homes. 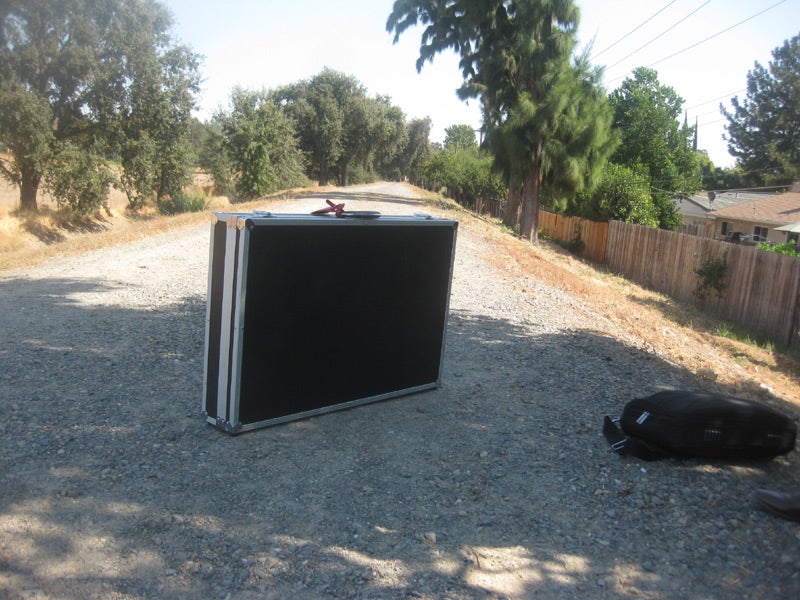 The Swinglet is small. It has an 80-centimeter wingspan and fits into a slim case similar to what you might use to carry an electric guitar 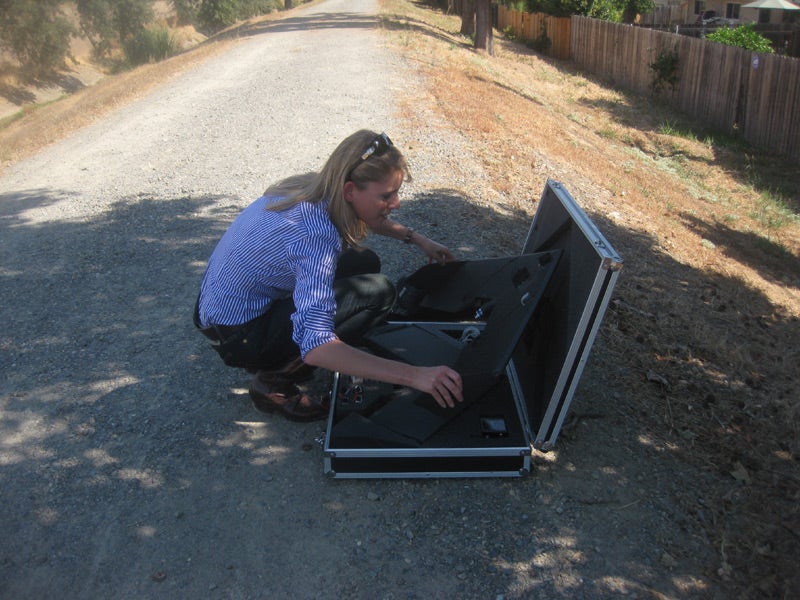 We carried it into a field and set up for flight. A laptop is the command center, communicating with the drone through a radio module. Andrea, the Sensefly rep, was my guide. 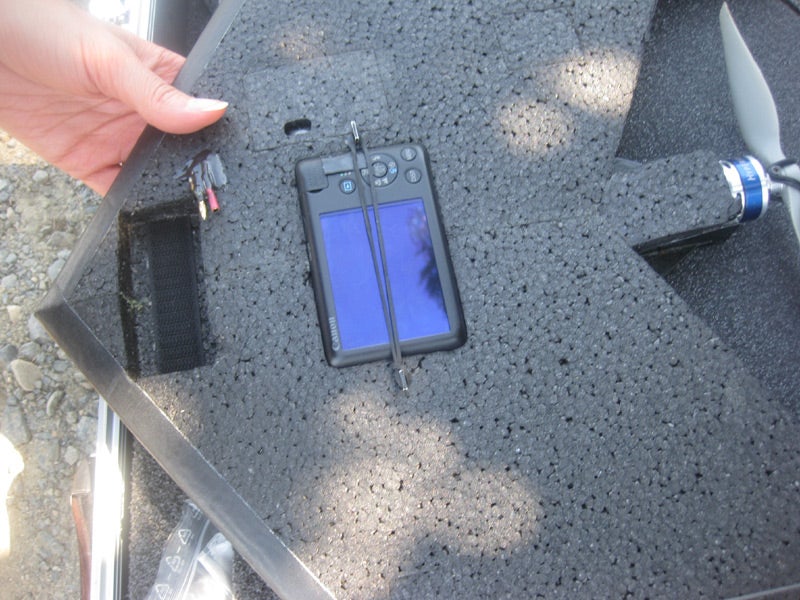 A 1500mAh lithium polymer battery provides the power for the drone and a modified 12.1-megapixel Canon PowerShot mounted on the drone grabs the images. 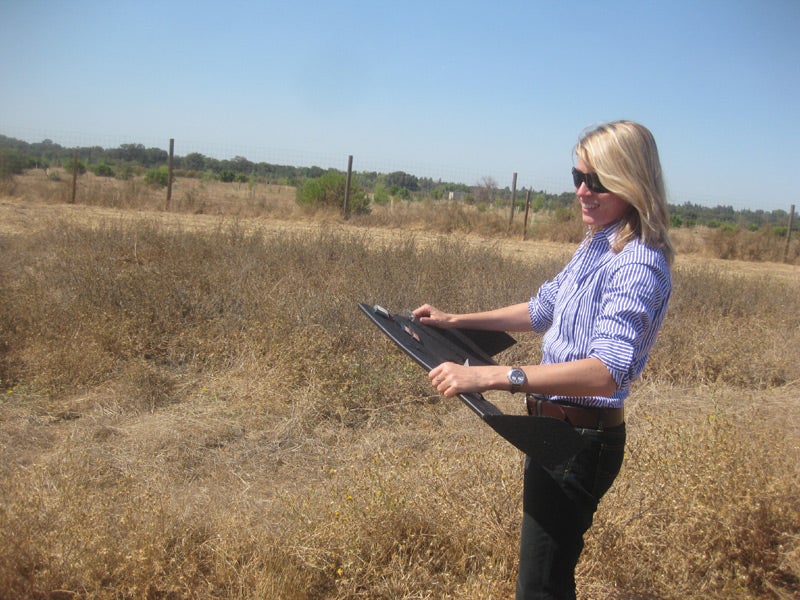 With a total weight of just 500 grams, the Swinglet drone is too small to carry weapons, unless you are planning to perform surgical strikes using actual surgical tools. Connect the battery and the Swinglet drone boots up. It orients itself with its onboard GPS and prepares to fly. 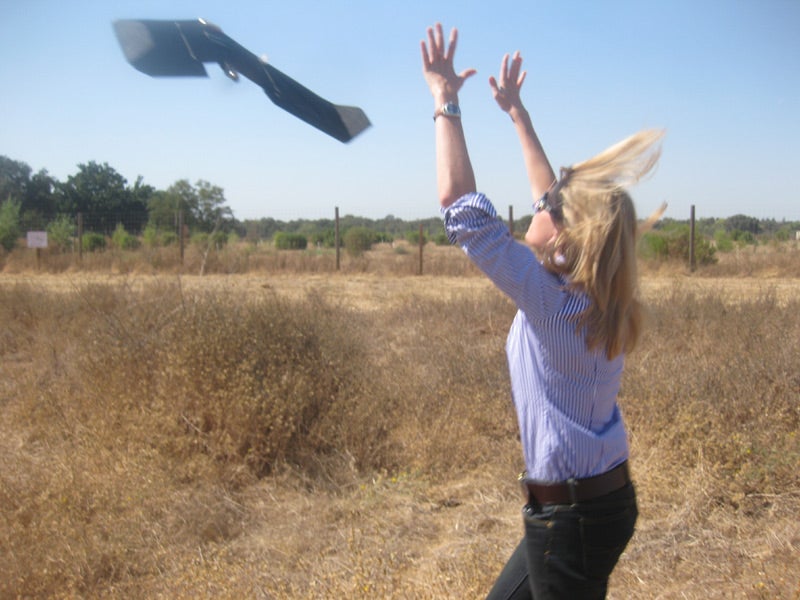 The drone does not have wheels and does not require a runway. After initialization it twitches its ailerons to signal that it is ready to fly. It is launched into the air by hand and immediately begins to climb and follow its programmed route. 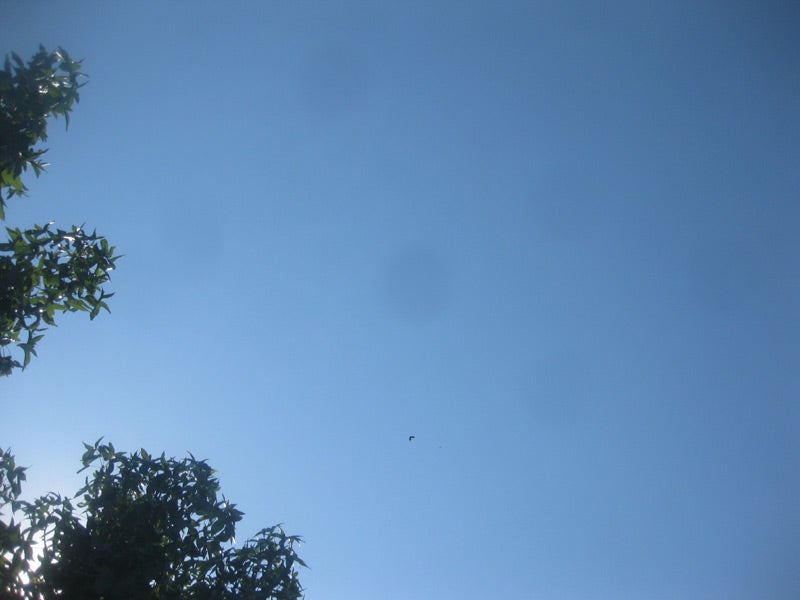 My host let me know that birds will often join the Swinglet in flight, and sure enough, birds flew into the air after it. By this part of the demonstration, my worries about fishing a drone out of the creek had evaporated. This plane was not going to crash and it wasn’t going to fly away. It was going to do whatever we wanted. 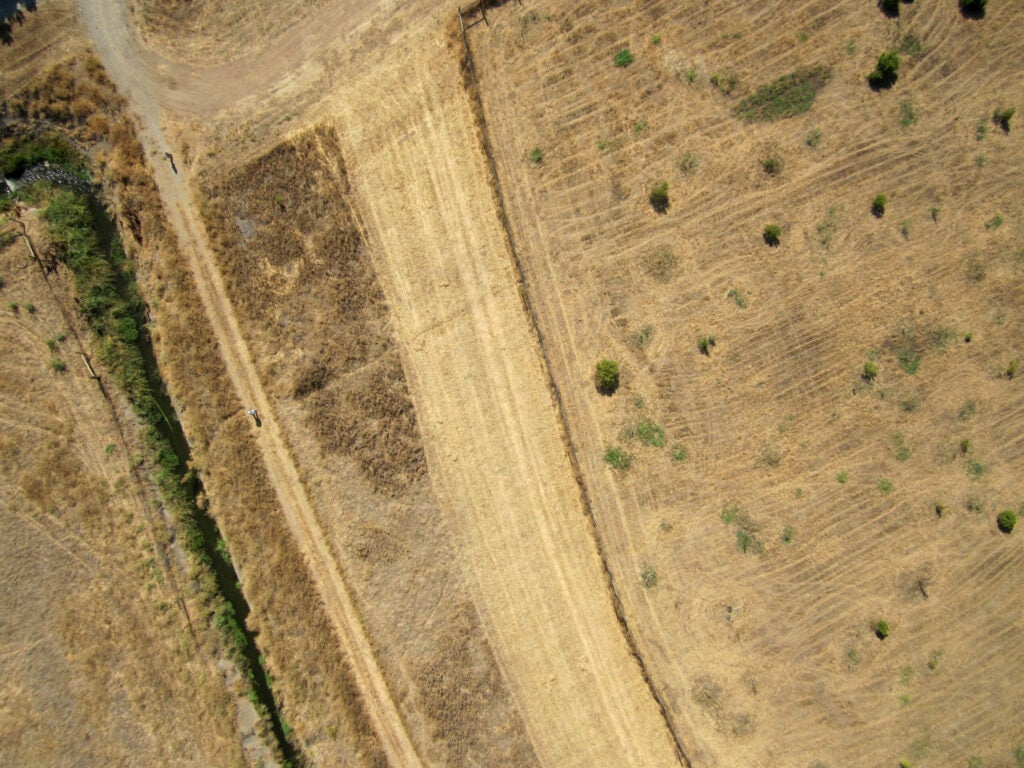 Although it is black, durable, quiet, and lightweight, its most common use will probably be flights above farmland. Access to routine, affordable aerial imagery is a boon to growers, allowing them to spot soil differences, mold, vermin and humidity problems. Photos make field damage from pigs immediately obvious, show heat burn and allow management of grass growing between crop rows. 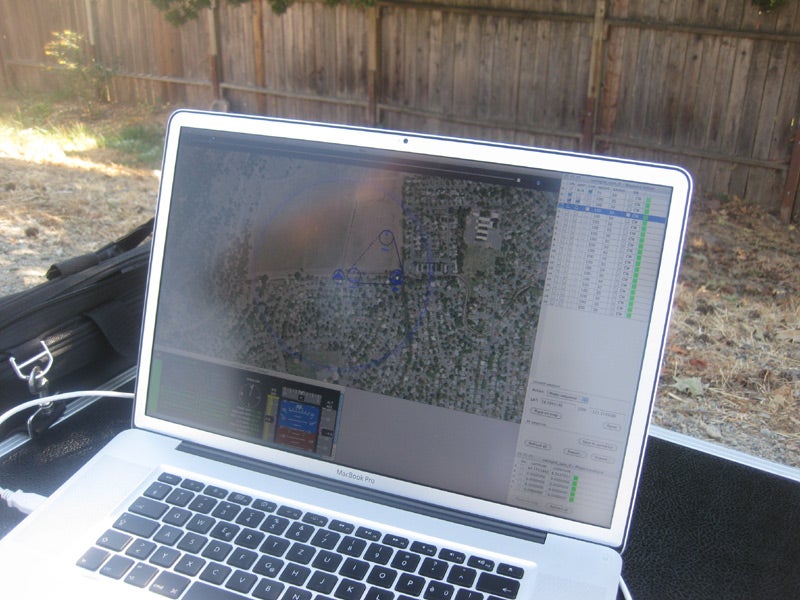 The flight control software, available for PC or Mac, is more impressive than the drone itself. It allows the operator to drag and drop waypoints on a map, select flying altitude and initiate a sequence of photography. 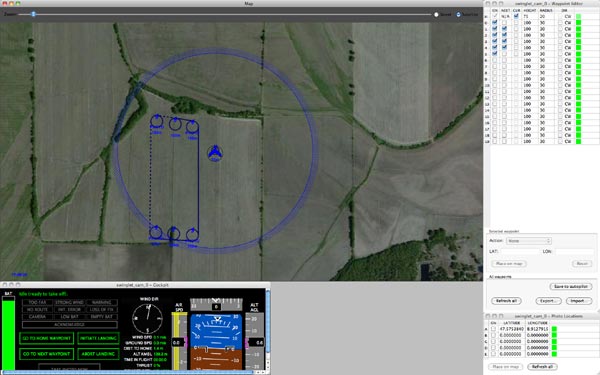 It continuously reports airspeed, groundspeed, aircraft position and battery strength. Maximum flight time is 30 minutes, allowing a flight 10km (6 miles) and back. I didn’t test its maximum but the Swinglet could probably scan 1,000 acres in one sortie. 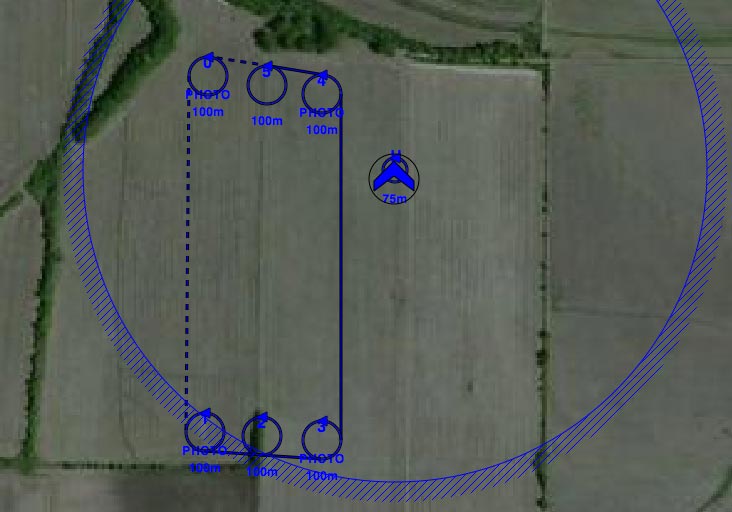 The demonstration lasted about 10 minutes, making a couple of passes over nearby homes. Flying at 100 meters, the drone motor is not audible unless it is immediately overhead. 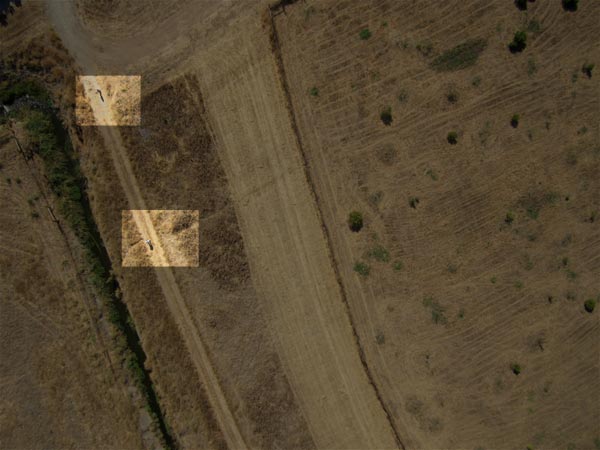 With the drone out of the sky, we downloaded the photos onto a laptop and browsed through them. They were sharp and huge, like the pictures you wish you could snap on a flight, or like Superman could. This is us! 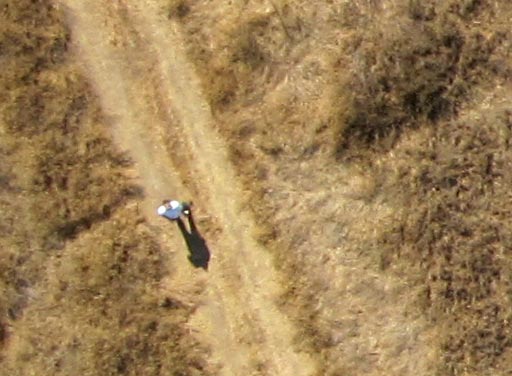 Aerial View of a Fascinated Rob 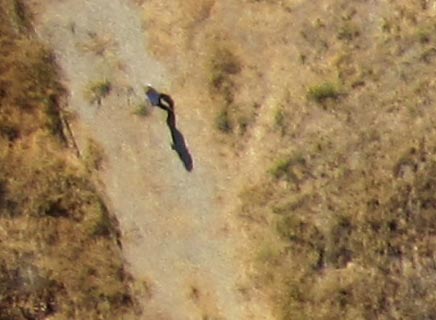 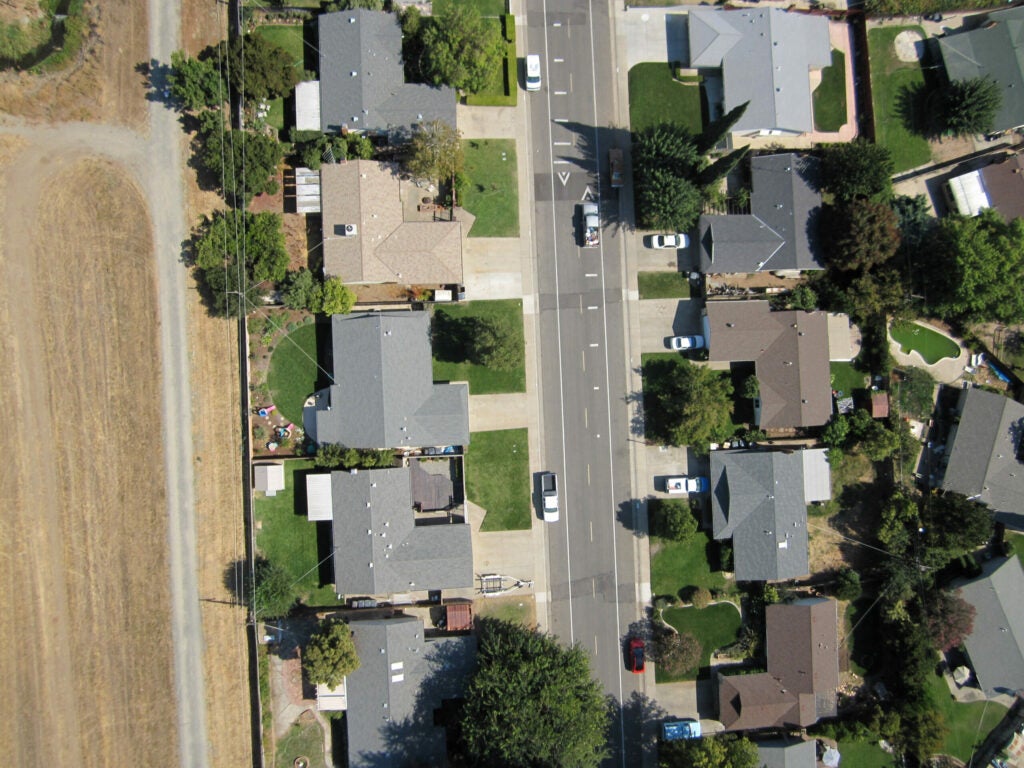 To reduce vibration, the motor actually pauses when the camera is taking a picture. 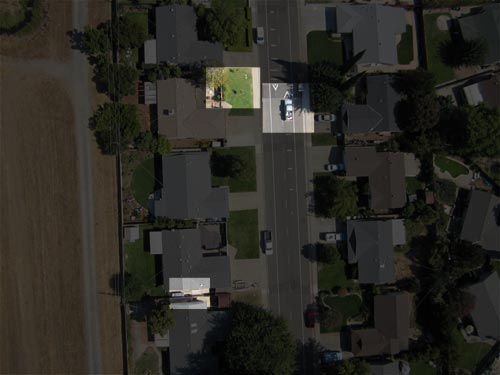 Some interesting details were captured in Sensefly drone photo #2. 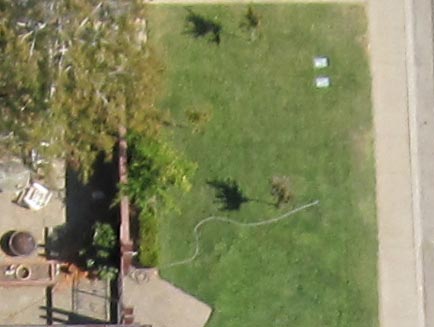 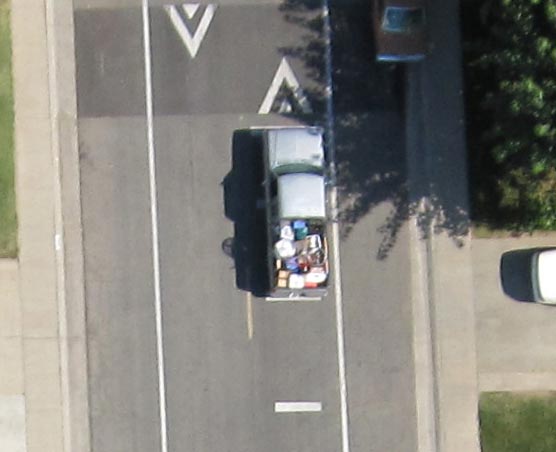 Here is a pickup truck carrying a birdcage, approaching a speed bump. 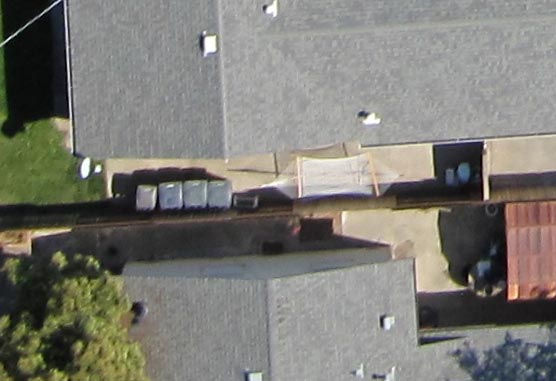 Somebody has strung up a hammock in a secluded alley, by the garbage. 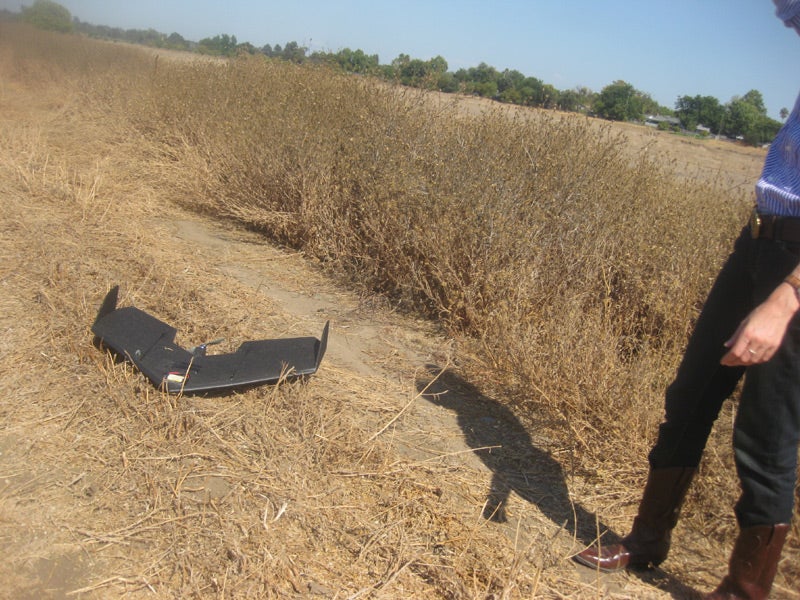 The landing sequence is automatic and controlled from the laptop. Grass is the ideal landing surface, but asphalt, cement, sand and snow are acceptable surfaces. Perhaps aware that an occasional rough landing is inevitable, the team at Sensefly skipped fashioning a carbon fiber hull and cut the drone from pliable expanded polypropylene (EPP) foam. This material is easier to fix, and is less likely to cause an injury if it did get knocked out of the sky. As part of their safety testing, an engineer at Sensefly volunteered to be struck by the drone at full power. He described it “like being hit with a football”.
Aviation
Drones