If you want a robot to maneuver aggressively, it has to be small. As you scale things down, the “moment... 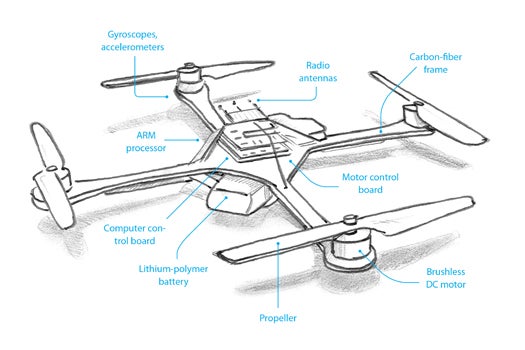 If you want a robot to maneuver aggressively, it has to be small. As you scale things down, the “moment of inertia”—the resistance to angular motion—drops dramatically. Our nano-quadrotor robots are made to be as lightweight as possible: less than a fifth of a pound and palm-sized.

They can do an aerial backflip in half a second, accelerate at two Gs, and fly rotor blade to rotor blade in three-dimensional formations—and they do all this autonomously. We tell them where to go but not how to go. Each robot communicates with a network of motion-capture cameras mounted on the ceiling of the lab. The cameras are connected to a computer, which calculates the position of the robot and its neighbors. It’s like GPS, but the information is updated 100 times per second with sub-centimeter accuracy. The robots also have sensors that measure angular velocity, accelerometers like those that tell airbags when to deploy, motors to run the propellers, and circuitry to control the motors and batteries.

The big mathematical challenge for flying robots is making them move in six dimensions: x, y, z, pitch, yaw and roll. We create 3-D obstacle courses in the lab—windows, doors, hula-hoops taped to posts—and ask the robots to fly through. It looks like a Harry Potter Quidditch match. We also tested some bigger robots in buildings damaged by the earthquake in Sendai, Japan. That’s the main application we envision for these robots: search and rescue.

—Vijay Kumar is a professor of mechanical engineering at the University of Pennsylvania. The nano-quadrotors are now made by KMel Robotics, a spin-off of the university’s lab.