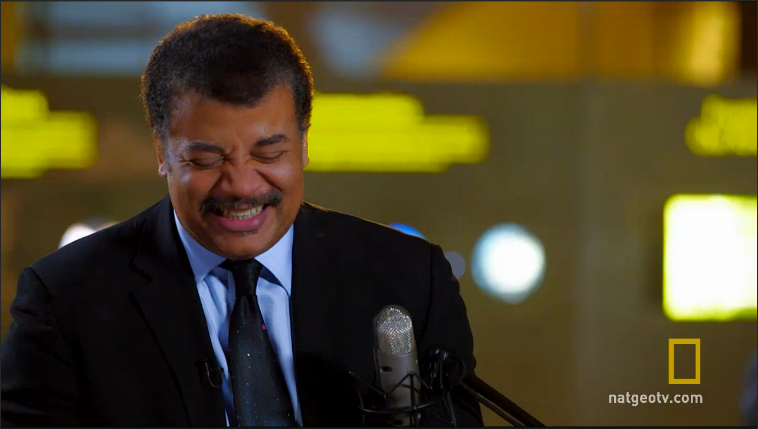 As one of 7,000 astrophysicists among more than 7 billion people, Neil deGrasse Tyson is one in a million. National Geographic TV
SHARE

It’s not often that I’m waiting to order a drink at the bar next to Bill Nye. But on the rare occasion that this does happen, as it did this past Thursday evening, I knew we were on the verge of something big.

In the Hall of the Universe, within the stately walls of the American Museum of Natural History in New York City, we anxiously awaited our first glimpse of the nerd’s answer to The Daily Show or The Colbert Report: Neil deGrasse Tyson’s Star Talk (which hits the rest of your screens tonight!). The weekly show is derived from his podcast of the same name. In March, likely due to the fact that his guest on the show was Elon Musk, Star Talk was the #1 podcast on iTunes, among all genres. The only difference between taping the podcast and TV versions, he says, is that he has to be better groomed for the latter. And that comes across in the show, as it really is just a glorified podcast, with hosts and guests sitting awkwardly on stools in front of the Hayden Planetarium. Though the conversation at times feels forced, it covers a range of random and sometimes scientific topics, and throughout the hour-long show, the camera also cuts to pre-recorded interviews with various celebrity innovators and leaders.

But Tyson has a lot going for him. Namely, people love him. This show is launching on the heels of Tyson’s recent television hit, Cosmos. After it aired in 180 countries last year, Tyson said he was done with TV for life. But here he is again, with 20 episodes of geek-filled Star Talk in front of him.

For the pilot episode, which airs Monday, April 20, Tyson’s guest is George Takei, best known for his role as Hikaru Sulu in Star Trek. Their conversation covers everything from Takei’s childhood in the Japanese internment camps during WWII, to racism in 1970s television. As Takei points out, the only role for Asian actors at the time was as chauffeurs that may or may not get to kick someone’s ass. Takei, on the other hand, occupied the enviable position of helmsman of the USS Enterprise. But, in true stand-up fashion, Tyson’s co-host, comedian Leighann Lord points out this role still involved driving the ship, and therefore isn’t actually that different from being a chauffeur.

In a question and answer session after the screening, Tyson explained that Star Talk, like all good (and NSFW) talk shows, will air at 11 P.M. to attract a certain audience: adults. Why? For one thing, Tyson became public enemy No. 1 among fourth graders back when he declared that Pluto wasn’t a planet. For another, he says, adults outnumber children. And they run things. “The problem with our country isn’t scientifically illiterate children,” Tyson explains. “It’s scientifically illiterate adults.” Tyson plans to promote science until it achieves consciousness and to feed an appetite for science that he thinks already exists. “The good thing about science,” he says, “is that it’s true no matter what you believe.”

Bill Nye the Science Guy will also make a cameo appearance in each episode. In the pilot, he’s taped in the library, where he’s getting shushed for his characteristic and unabashed enthusiasm about science. When he was invited to share his thoughts from his seat in the audience after the screening, Nye proclaimed: “Through science and technology, I want to–dare I say it–change the world!” And Nye thinks we’re making progress on that front. When else in history would a show called The Big Bang Theory be so popular? And is there anybody that doesn’t use STEM as a noun now? Bottom line: Science is trending, and Star Talk is capitalizing on that trend.

Tyson already has a number of big names lined up for future episodes: guitar-strumming astronaut Chris Hadfield, guinea worm slayer Jimmy Carter, Interstellar director Christopher Nolan, and Twitter co-founder Biz Stone among them. So who else is Tyson gunning to get on the show? “I’ll take any head of state,” he says. He’s got top people courting President Obama, a pop mathematician (whatever that is), and even Charlie Sheen. “He has some serious geek in him,” Tyson says.

On that note, the host wrapped up the show with his signature parting phrase: “Keep looking up!” As the first science-oriented late-night talk show, “up” is definitely the direction that Star Talk seems to be headed. The show may come off as superficial to those of us already on the pro-science bandwagon, but keep in mind that you’re not its target audience. The goal is to bring science into the mainstream, pop culture conversation. And the wave of inspired applause that followed Tyson’s exit is proof that his latest television endeavor is likely to do just that.