At London’s Heathrow, which moves more international passengers than any other airport, the fuel jockeys of the Aircraft Service International... 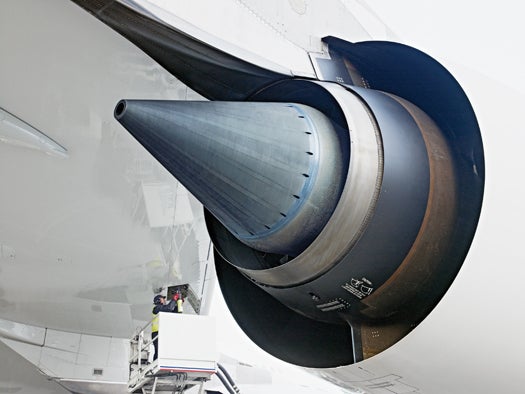 At London’s Heathrow, which moves more international passengers than any other airport, the fuel jockeys of the Aircraft Service International Group oversee refueling. Filling an Airbus A380 can take two hours, at a rate of about 1,000 gallons per minute. So much flow can generate static, which can create a deadly spark (jet fuel is kerosene-based, and much more flammable than gasoline). But the hose is semiconductive to prevent such a conflagration. Add too much fuel, and the extra weight renders the craft less efficient; too little can be disastrous. And placing the wrong amounts of fuel in the various tanks can throw the craft off-balance.

Fuelers work quickly—time wasted on the tarmac is money lost. To speed the process, they steer their vehicles under the plane’s wing and begin pumping before they know the exact amount to fill up. The fueler positions his truck, its hose (which at some airports remains off the ground, buoyed by clamps attached to small wheels), the bonding cable and the lifting platform until he is under the craft’s wing. He closes a switch called a deadman handle. Every two minutes, the fueler resets the handle to make sure the flow is continuous. As departure nears, the plane’s captain will radio to request a final amount based on the span of the trip ahead and weather conditions (headwinds can add 10 percent more fuel required for a trip). The A380’s tanks hold 84,600 gallons, and its four Rolls-Royce Trent 900 engines will consume about a gallon of jet fuel every 78 miles for each passenger on board, 853 at full capacity. At Heathrow, ASIG’s fuelers move about three million gallons of fuel every day.