The lake is basic. The slippery, scuba-diving fly that lives there is not. 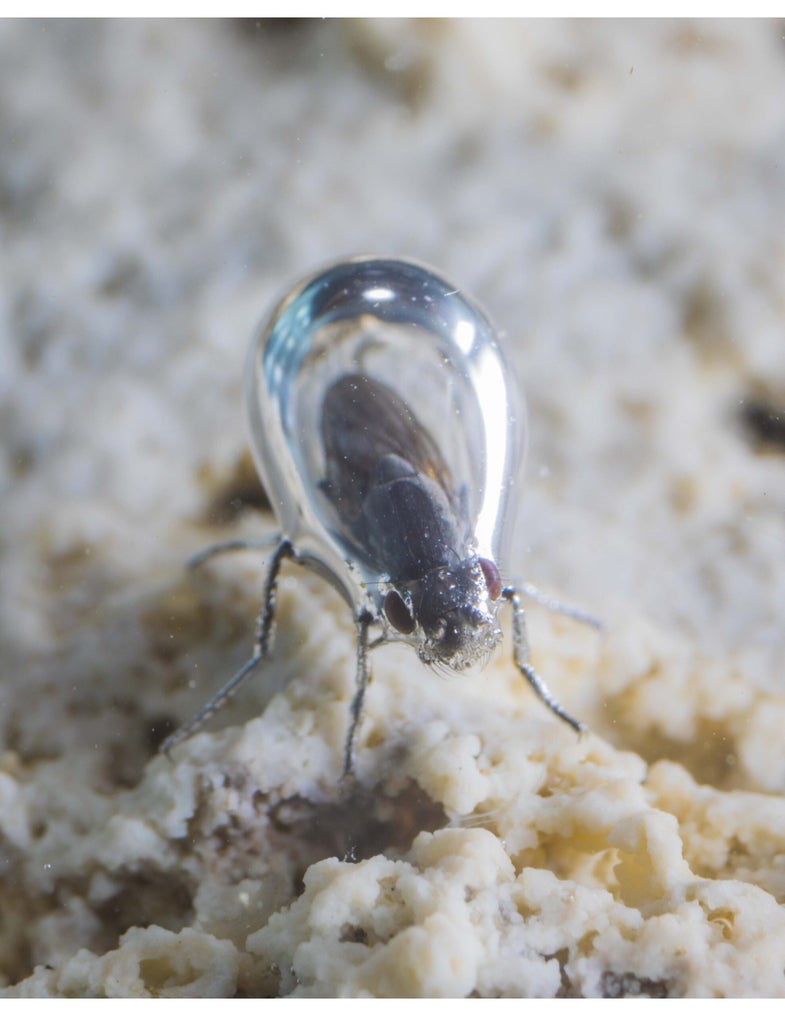 There was a salty lake that swallowed a fly. I do know why it swallowed the fly, and rest assured, neither the lake nor the fly is going to die any sooner as a result.

California’s Mono Lake is three times saltier than the Pacific ocean, and is incredibly basic. Chemically speaking, that is. It’s on the opposite end of the pH scale from acids. The lake is filled with alkaline bases that give the water a soapy feel.

Some people have even gone so far as to wash their clothes in the water, taking advantage of the built-in suds to remove dust from their clothes or oil from their hands without resorting to soap. The strange chemistry of the 760,000-year-old lake is so hostile that no fish swim beneath the surface, leaving algae to flourish down below.

Into this fish-free gap in the food web squirmed the alkali fly. The briny, slick surface hid abundant food, but boasted no predators. So the alkali fly evolved to dive in at an incredibly sharp angle, wander around in the drink, and then pop back up, dry as a California desert.

In an article published in PNAS, researchers from Caltech figured out how the flies manage the trick, when so many of their buggy counterparts cannot cope with Mono Lake’s highly alkaline water.

They found that like other flies, alkali have small hair-like structures and a coating that lets water slip off their back. But unlike other flies (including kelp flies and fruit flies), these insects have more ‘hairs’ and an even more water-repellent coating. The combination means that the flies can trap a small bubble of air around them as they squiggle their way underwater.

The air bubble helps preserve the energy the fly expends getting past intense surface tension. The insect must exert a force 18 times greater than its body weight to get under the water, but the bubble helps them float back up to the surface with little effort.

“It’s not that Mono Lake flies have evolved a new and unique way of remaining hydrophobic—it’s that they’ve amplified the normal tools that most insects use,” biologist and co-author of the paper Michael Dickinson says in a press release. “It’s just a killer gig. There’s nothing underwater to eat you and you have all the food you want. You’ve just got to dive in perhaps the most difficult water in which to stay dry on the planet. They figured it out, and so get to enjoy an extremely unique life history. It’s amazing how the evolution of such small-scale physical and chemical changes can allow an animal to occupy an entirely new ecological niche.”

The flies might have it made underwater, but above the surface, they’re food for migratory birds that flock to Mono lake, and their lake-borne larvae were an important food source for local indigenous peoples.

Now the flies face even bigger threats from humans. From 1941 to 1982, the lake got saltier as inputs of fresh water were to Los Angeles. The increased saltiness doesn’t seem to have impacted the ability of the flies to move around in water, but other research has shown that the change in chemistry could affect their larvae.

Luckily, the rapidly increasing salinity is being mitigated by conservation efforts and heavy California rains. But that’s not all. As they were conducting this research, the authors noticed a sheen of sunscreen coming off their skin into the lake, and wondered what the oil would do to the flies. The results of lab tests, they wrote, were “catastrophic,” trapping soaked flies underwater and eventually drowning them. Fish oil had similar effects.

So if you find yourself at Mono lake slathered with sunscreen, spare a thought for the fly before you plunge your body into the water. You might be ok with getting all wet, but if the fly can’t stay dry, it will die.