Virtual renderings, made from drone maps, could help with real science 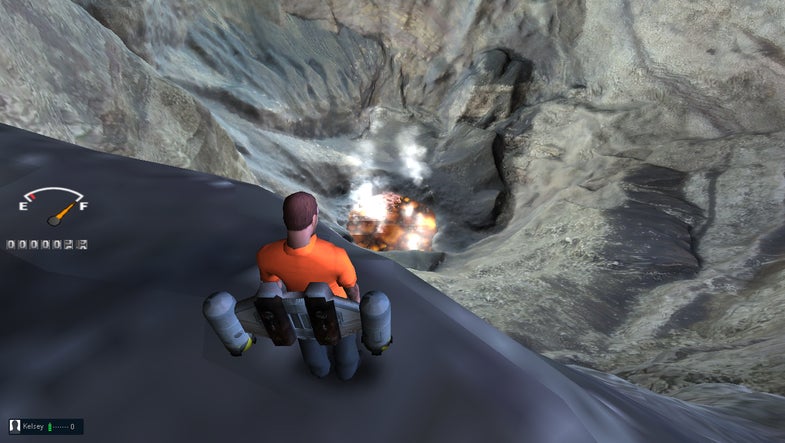 Before descending into the crater of Ambrym Volcano, I have to find my jetpack. Turning away from the crater–a pit as deep as the Empire State Building is tall–I walk over to the colored blotches that represent expedition tents. A forest of jetpacks floats in a cluster just shy of the crater’s rim. Strapping one on, I’m ready to begin my journey.

Ambrym Volcano is an active shield volcano on an island at the center of the Pacific nation of Vanuatu. My guide, Sam Cossman, had recently ventured there in person, with a full team, to record a short film about the lava lake at the center of Ambrym’s larger of two craters. Cossman’s expedition required breathing masks to filter out the toxic air, ropes to descend the crater walls gradually, and protective heat suits for standing on the edge of a crater burbling with hot lava. My trip, guided by Cossman, requires little more than a browser extension and a couple of hours in the middle of the day.

When Cossman went to Ambrym, he and his team used a drone to map out every nook and cranny of the volcano, covering both craters. That map was in turn made into a full three-dimensional rendering. Using the Unreal game engine inside an AvayaLive Engage virtual environment, it’s possible for anyone with a login to explore Ambrym from the comfort of their laptop screen. Which is what I’m doing. With a jetpack.

The jetpack is a video game conceit. The crater is full of steep edges, and jetpacks are a simple solution to avoid getting stuck. Even without the difficulty of climbing up, the crater itself is huge. The avatars stand about six feet tall in the virtual environment, and while moving in the game is less physically taxing (not to mention less life-threatening) than crawling around an actual volcano, it’s not much faster if you don’t use the jetpack. 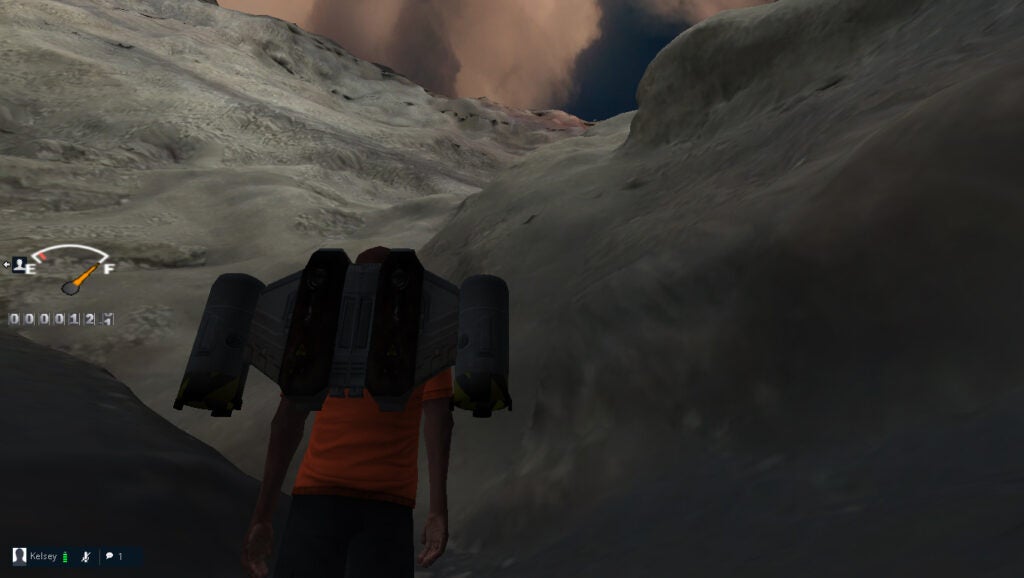 Ambrym Crater From Halfway Down

With Cossman in the lead, we descend down the wall of the crater in a sort of stumbling fashion. I keep falling behind, captivated by the scale of this crater. Looking behind me, the walls stretch toward the dome of the artificial sky. I grew up in the American West with parents who loved to take me, as I termed it, to “famous rocks and holes in the ground,” so I’m somewhat used to the gigantic scale of natural features like this. But Ambrym is still breathtaking, even in virtual form. I’ve also explored my share of gigantic landscapes in video games, but there’s something special about being inside a real place like this.

Ambrym is not a hospitable environment. “There’s such cataclysmic weather here at the top of the volcano,” Cossman tells me as we continue our descent. “You’ve got all this warm air coming around the islands and it rises so quickly and condenses into these clouds that form sulfur dioxide, creating this near-apocalyptic storm up here, with constant lightning, 50mph gusts of wind that are tearing the tents apart, and huge amounts of rain.”

We take a moment to just gaze in wonder at the environment around us. “I can’t tell you how similar it looks. If you aim the trackpad up and move the mouse circumferentially around the screen, this is really what it looks like when you’re down inside. There’s basaltic rock, it’s very white almost like snow on the side of the cliff,” says Cossman. We walk to the lava lake, and he continues over the low roll of the model’s ambient sound: “You feel like you’re in this kind of funnel, if you will, standing next to this incredible force of nature.” The lake has the roaring fluctuations of sloshing water, which Cossman tells me is the actual sound from the lake. Only, in person the lava lake sounds much louder, like “a crashing wave of rock in liquid form,” Cossman says. “It’s a lot more deafening that; it sounds like a freight train.”

In real life, the heat from this lake is extremely dangerous, even to people wearing full protective gear. “My thermometer capped out at 500 degrees Fahrenheit–it just said ‘high’. Everything melts at this point,” says Cossman, before suggesting something that in any other context would be reckless. “This is one thing we didn’t get to do on our journey,” he said, and we jumped into the lava. 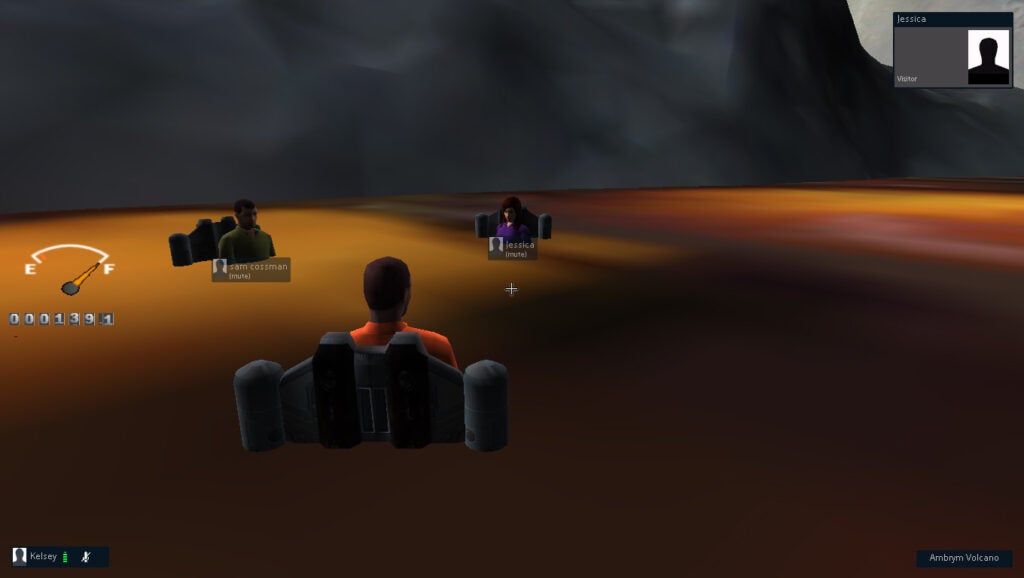 Inside The Lava Lake

All my previous experience of jumping into lava lakes comes from video games, and in those a slip into lava is usually followed by frantic panic as I try to stop being on fire. The Ambyrm lake had no such ill effects. Instead, I look at the shores of the lava lake from the inside. Since the model is still a work in progress, jumping into the lake let us fall through the bottom, so we’re able to explore the underside of the crater, as it stretches upward like an elaborately folded paper sculpture.

Upon leaving the lava lake, we journey back to the rim, and find another of the model’s creators. Joe Rigby is the marketing manager of MellaniuM, which builds virtual environments. Rigby had reached out to Cossman to see if they could make a 3D model with his drone footage of the crater, and considering we were talking inside that model, it turned out to be a pretty great success. Asked about what he plans to do with the model, Rigby says “There’s no plan, this is just a proof of concept.”

We say our goodbyes to Rigby, and I ask Cossman if we can do something no human had ever (to our knowledge) done before: stand in the second crater of Ambrym. Cossman’s expedition had tried to get to it, but a large plume of sulfuric gas obscured their view into the bottom of the crater, so the team decided to focus its efforts on the lava lake they could see for sure. Cossman’s team managed to film the second crater with their DJI Phantom 2 Vision+ drones, flying wherever the gas wasn’t, and then waiting for the winds to shift so they could piece together a map of the crater.

With a blast from our jetpacks, we take off, and end up standing on previously unexplored ground. 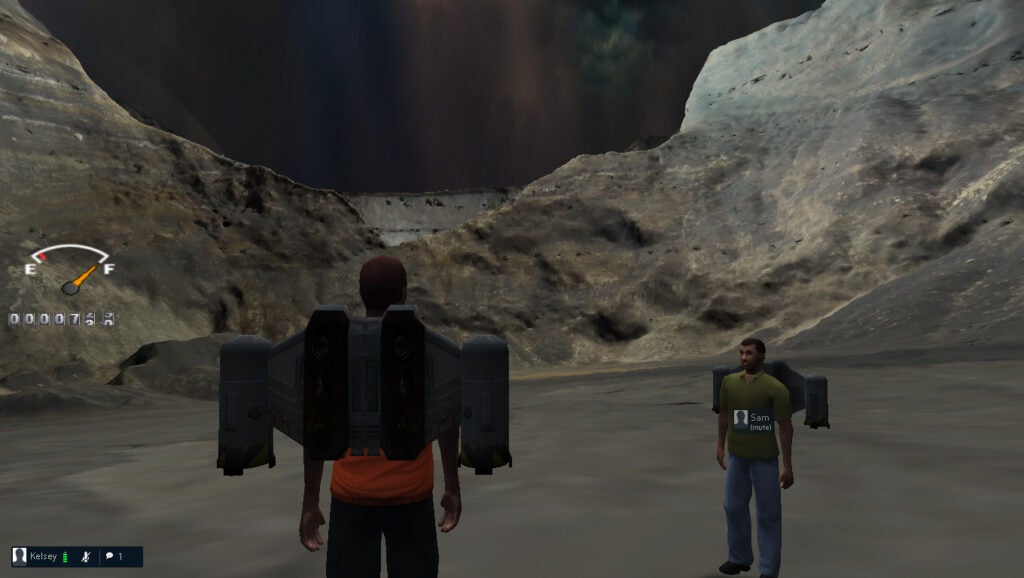 Standing In The Second Crater

Inside the virtual environment, we could go where toxic fumes prevented even experienced and well-equipped adventuring crews. “It’s just so cool to look around. I’ve never seen the view at this point,” says Cossman, the excitement in his voice audible. As we walk around the crater floor, he sees a small pink patch on the ground and exclaims, “Look at that, there’s lava! There you go, this is the vent!” We’d seen in simulation what was obscured in real life.

The crater is amazing. But before I’m done exploring, I know I want to come back with other researchers who study volcanoes.

On my second descent, Cossman and I are joined by Jeff Marlow, a geobiologist who’d accompanied Cossman to Ambrym in person, and by Jessica Ball, a volcanologist with the U.S. Geological Survey.

With a blast from our jetpacks, we take off, and end up standing on previously unexplored ground.

Standing in the second crater, Marlow starts to piece together what could be done with this model and with improved versions of it in the future. A model could help future exhibitions with route planning. And, “ultimately, linking this up with other metadata like the mineralogy would be super interesting,” says Marlow. “At this point it’s just color that you’re seeing, but if you could also look at the types of rocks, that’d be cool too.”

Ball agrees. “From a geological mapping standpoint, this would be very useful if you could quantify things as you’re exploring here. The thing I think of is Google Earth, which is useful because you can take measurements and get hard data out of things.”

Standing next to the lava lake, I ask Ball what she could tell from the model already.

“From the walls of the crater I can get an idea of how the whole volcanic edifice was built up,” she says. “You can see layers usually and when you have alternating layers that look dark and light, you can assume that you’ve had alternating eruptive product, so lava flows versus explosive eruptions going through time…. Just the morphology of it, the way things are shaped, the way one feature affects another feature can give you an idea of how the volcano built itself up and then destroyed itself.” 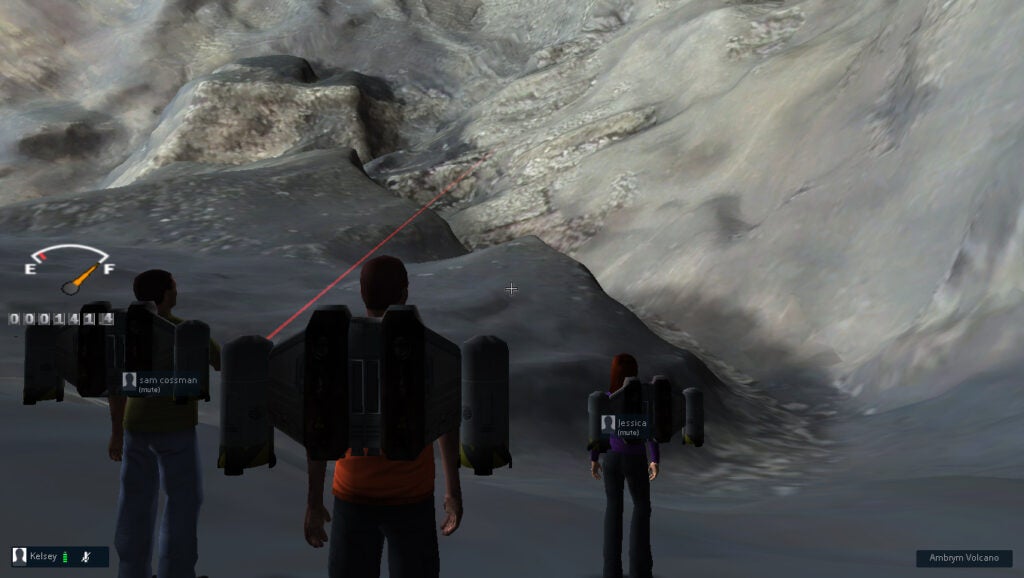 Looking At Sediment Layers In Ambrym

Because volcanos are defined by tremendous geological events, Ball suggests recording a 3D model before and after an eruption, serving as a kind of “track changes” for volcanoes. And it’d allow volcanologists from all over the world to explore the same volcanic features in a virtual field trip.

Speaking of field trips, Ball says, “this is the sort of thing that I think would be really great for outreach. What people really like is stuff they can put their hands on…. I can imagine an elementary or high school class that wants to learn more about a volcano diving into an environment like this and running around and having all sorts of fun.”

As we talk about the field trip, we all wander through the lava lake, with our heads sticking out above the fatal flow. We spend another forty minutes looking at the lava lake, the second crater’s vent, and the fragile ridge in the middle. Ball’s work focuses on water in volcanoes, so seeing the shape of the crater floor gives her a good idea of how surface water, including the water released as steam when the volcano erupts, will flow in the crater. The coloration too, while not as revealing as being there in person, gives an indication of what layers of the volcano have turned to clay, which in turn explains a bit more about the volcano as a whole.

We wander through the lava lake, our heads sticking out above the fatal flow.

At the end of my second trip into Ambrym, I ask Ball if she has an final thoughts. She says:

“I’m busy wanting to wander around more. One of the reasons that we get into geology as scientists is because we love to go places and explore like this, and the kick to volcanologists is often a balance between, ‘Well you can go there, but is it really going to be safe?’ This sort of removes that element of worrying about safety.”

The 3D rendering of Ambrym volcano is still in its alpha version. As of yet it’s hard to say where technology like this could take us–probably literally anywhere. At the rim of the crater, Joe Rigby discussed possibilities ranging from architecture to universities, and while there are no set plans yet, some educational outlet is bound to bite. Leading a class of fourth-graders through an actual volcano is just too cool of an opportunity to pass up.