The world’s art is under attack—by microbes

Bacteria and fungi are a menace to paintings, sculptures, and ancient artifacts. 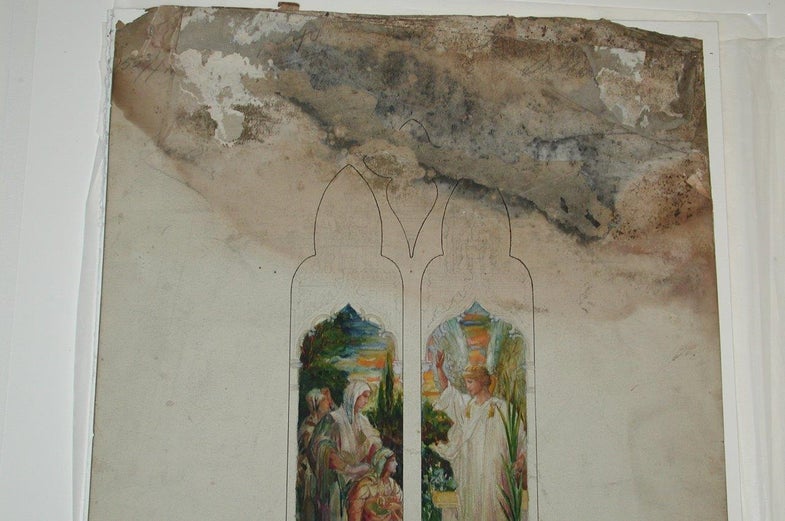 We’re used to seeing famous works of art and historical artifacts marred by the elements. They can be eroded by wind and water, faded by sunlight, or nibbled by insects. But cultural relics can also be damaged by hordes of even tinier invaders: bacteria, fungi, and algae.

“Microorganisms are a big problem for cultural heritage,” says Franco Palla, a biotechnologist at University of Palermo in Italy. These tiny invaders have wrought catastrophic damage on historic sites like the Lascaux cave paintings in France and the Titanic—the infamous ship is being devoured by a tenacious species of metal-hungry bacteria.

That’s why scientists and conservators are working to identify what kinds of bacteria are colonizing an artifact, purge them, and make sure they cannot return. Some are even enlisting bacteria to help protect historic sites.

Researchers like Palla are dedicated to protecting the world’s cultural treasures. “In the countries like Italy and regions like Sicily, our artwork is a source of work and money,” he says. “You are doing research for something that is really important for the city, for the people, for the history of a country.”

Microbes have found their way into museums, caves, and ruins. “Almost any cultural artifact is prone to colonization by microorganisms,” Ana Zélia Miller, a geomicrobiologist at the Institute of Natural Resources and Agrobiology of Seville’s Environmental Microbiology and Cultural Heritage research group in Spain, said in an email.

Some artifacts like leather, wood, parchment, or textiles are made with organic materials that microbes like to feast on. It used to be common for artists to use egg tempera—pigments mixed with egg yolks as a binding agent—that has left their paintings more susceptible to infestation. Mold can also take hold when paintings hang against a cold wall where condensation can form.

In other cases, microbes secrete acidic compounds that corrode metal. Even stone monuments and statues aren’t safe; rock-dwelling microbes can cover them with disfiguring gunk or destroy them from the inside. On the American Indian Museum in Washington, D.C., cyanobacteria (also known as blue-green algae) have set up shop where water has flowed over the building façade. These colonies are a nuisance because their dark pigments leave stains like ink drippings along the walls. But the bacteria also make a biofilm, or layer of slime that anchors the community in place and keeps them from drying out. This moist environment attracts other microbes that bore into the stone and weaken it. “That humidity really sets up the conditions where everything can get a toehold,” says Paula DePriest, deputy director of the Smithsonian’s Museum Conservation Institute in Suitland, Maryland.

In fact, water is usually the key ingredient for microbial disaster, she says. “It’s high humidity we really associate with most of the damage we see from microbes.” Some outdoor monuments or archeological sites are found in moist environments. In other cases, a previously sheltered treasure can be exposed to microbial invaders.

During excavation from ice or water, damp objects will be brought into spore-filled air. When sunken ships are brought to the surface, microbes are drawn to the waterlogged wood. Hurricanes or other disasters can also soak precious artifacts. In 2005, Hurricane Katrina flooded Southern University at New Orleans, leaving its collection of African art open to infestation. “Fungi was just growing all over it because no one could get back in there for months,” DePriest says.

Human visitors can also unknowingly introduce marauding bacteria and fungi. In ancient caves, tourists can carry in skin flakes, cloth fibers, and other materials microbes like to dine on. Having people around also changes the humidity and other ambient conditions, making it easier for pests to grow. This is what happened in Lascaux, where fungi devastated some of the oldest cave paintings in the world. Even the lights installed to help tourists navigate historic caverns encourage microbes to grow, Cesario Saiz-Jimenez, another member of the Environmental Microbiology and Cultural Heritage research group, said in an email.

He, Miller, and their colleagues have investigated the crises at Lascaux and other murals, crypts, and catacombs. In Altamira Cave in Spain, white colonies of microbes have been found dotting Paleolithic paintings. Saiz-Jimenez and his team recommended that the cavern stay closed to the public to avoid a similar fate to Lascaux. This advice has not always been heeded, although there are now replicas of Lascaux, Altamira, and other caverns for archaeology buffs to enjoy.

Once an artifact is within their grasp, microbes get busy quickly. Fungi-related damage can show up within 48 hours. And once an artifact has been attacked, it’s more vulnerable to being infested again. “It’s a little more degraded, a little more frayed,” DePriest says. “Already the fibers and [other] compounds are broken down, so there are just more entry points for the insects or the microbes to get a hold.”

Microbes that colonize artwork may also cause respiratory problems for human visitors, but little is known about these risks, Palla says.

The good news is we can ward off microbial infestations by storing artifacts in conditions that don’t encourage spores to settle and germinate. This means keeping things cool and dry. “In an indoor environment, like a museum or a library…you can control the temperature, humidity, and light,” Palla says. Conservators also use UV-C fans to filter spores from the air and zap them with ultraviolet light.

Collections that are open to the public can’t be chilled very much. “It’s not very practical in museum settings, where you actually want people to see objects without being cold,” DePriest says. One exception is Ötzi the Iceman, a natural mummy who froze in the Italian Alps 5,300 years ago. He’s kept in a cold cell in the South Tyrol Museum of Archaeology in Italy that emulates the glacier he was discovered in.

Once a piece of artwork is colonized, it must be dried and cleaned before conservators can get to work restoring it. Artifacts can also be placed in a chamber filled with gases like argon. Eventually, the lack of oxygen will defeat most lingering microbes.

For some treasures, long-term protection is in order. Meteorites are often stored under nitrogen to deter microbes. “They don’t want to have to differentiate between Earth microbes and any signals from the origins of meteors,” DePriest says. Conservators have less control over outdoor artifacts, although they can treat them with biocides that prevent microbes from growing.

It can be difficult to keep track of all the different microorganisms that prey on each type of artifact, Miller says. But identifying what kinds of microbes have set up shop on a piece of art and how they are harming it is crucial to getting rid of them without causing further damage. In Lascaux, conservators at one point used a biocide meant to eliminate the fungus causing black stains on the cave’s famous paintings. It actually ended up boosting fungal diversity in the cave, Saiz-Jimenez and his colleagues discovered.

And these chemicals aren’t necessarily good for the environment, the artwork, or the health of conservators and tourists. So Palla and his colleagues have proposed an alternative solution: thwarting nuisance microbes with extracts from plants. They are testing garlic, mint, and tea tree oils. These compounds are part of the plants’ natural defenses against infestation, he says. The team is currently testing plant oils on the mosaics at Solunto Archaeological Park, an ancient city in Sicily.

There aren’t a lot of situations when having bacteria swarming over your art is considered a good thing. But every once in awhile, microbes are welcomed in; some scientists are investigating whether bacteria and fungi can be used to break down graffiti on heritage monuments. Bacteria can also help remove black, pollution-filled coatings from marble sculptures, Palla says. The microbes secrete compounds that alter the chemical makeup of the crusts, making them easier to remove.

Microbes may be able to preserve or restore monuments, but it’s not clear yet how well this will work, DePriest says. “Trying to figure out how you would have a microbe only attack the thing that you’re interested in getting rid of and not accidentally damage the primary material is the real issue.”

One hurdle will be making replicas to test these microbes on before unleashing them on cultural treasures. “You can make mockups, but sometimes the mockups don’t represent the situation you’re confronted with,” DePriest says.

And sometimes, microbes are the art. A few artists have started to turn to bacteria as their unorthodox but colorful medium of choice. It’s all a matter of perspective.