We remember the flag raising and "one small step," but what else did Neil Armstrong and Buzz Aldrin do on the Moon? 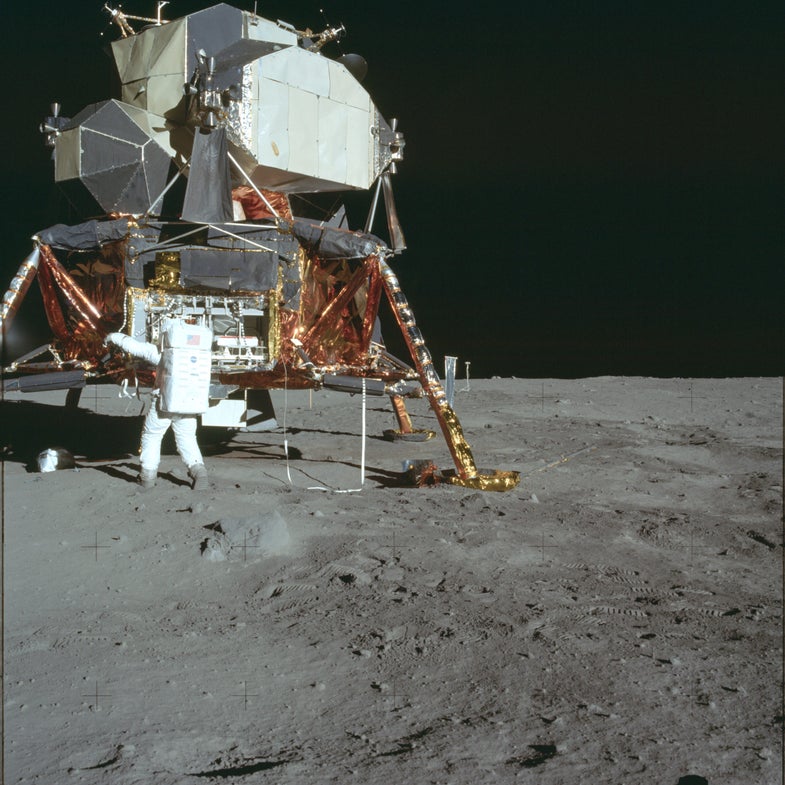 This month marks the 45th anniversary of Apollo 11. The lunar module Eagle touched down at the Sea of Tranquility at 4:17pm, Eastern time, on July 20, 1969. It was the first mission to land men on the surface of the Moon and return them safely to the Earth. And while we typically remember Neil Armstrong’s “one small step,” he and Buzz Aldirn did a bit more than stand around during their two and a half hours on the surface. In addition to the appropriately historic activities, there were some strange experiments done on the first lunar landing mission.

The EVA began seven hours after the landing with practical matters: the state of the spacecraft. the Moonwalkers turned to consider the Lunar Module and how it fared during landing. Aldrin remarked that there was “absolutely no crater there at all from the engine” and wondered if “right under the engine is where the probe might have hit.” Armstrong, meanwhile, found signs of their sideways velocity during landing in the probe’s mark underneath the engine bell; they’d clearly been moving sideways right up until touchdown.

Once both men were on the surface, their first experiment was called “evaluation of surface mobility,” which basically had the astronauts.

These initial checks done, Armstrong and Aldrin moved on to the surface activities we remember. Armstrong read the commemorative plaque and set up the TV cameras. Aldrin, meanwhile, carried out the “evaluation of surface mobility,” which meant walking around and relaying to Mission Control whether or not he had a hard time moving on the lunar surface. He noted that “the mass of the backpack does have some effect in inertia.”

The astronauts then set up the American flag before moving on to some individual experiments. For Armstrong, this was taking a call from President Nixon and collecting samples. For Aldrin, this was a host of less glamorous experiments.

First on Aldrin’s list was the “trajectory of lunar soil when kicked” experiment that quite simply had him kick Moon dust around and describe what it did. “Houston, it’s very interesting to note that when I kick my foot… material, with no atmosphere here, and this gravity… they seem to leave, and most of them have about the same angle of departure and velocity. From where I stand, a large portion of them will impact at a certain distance out. Several… percentage is, of course, that will impact… different regions out… it’s highly dependent upon… the initial trajectory upwards (garbled) determine where the majority of the particles come down.”

Then came the “evaluation of thermal effects of sun and shadow inside the suit” for which he stood in a shadow and described whether or not he noticed a difference in temperature. The difference was minor. “In general, time spent in the shadow doesn’t seem to have any…thermal effects… There is a difference, of course, in the… radiation and the helmet. So I think there’s a tendency to feel a little cooler in the shadow than we feel out in the Sun.”

Last was the “evaluation of surface shadows and colors” that had Aldrin describe the scene. “As I look around the area, the contrast, in general, is… comes about completely by virtue of the shadows. Almost… looking down-Sun at zero-phase very light-colored gray, light gray color… a halo around my own shadow, around the shadow of my helmet.”

Aldrin’s experiments done and Armstrong’s samples collected, the astronauts unpacked and deployed a passive seismometer and a laser ranging reflecor then climbed back into the LM. Aldrin went first, then Armstrong, sealing the hatch behind him.

It might seem like Apollo 11’s activities were uninteresting and superficial, but it fit perfectly into the overall Apollo program. In the same way the missions that preceded this first landing laid the groundwork that made it possible — Apollo 7 proved the command-service module was up to scratch after the Apollo 1 fire, Apollo 8 proved the systems needed to support a deep space mission to the Moon were ready, Apollo 9 tested the command-service and lunar modules in Earth orbit, and Apollo 10 ran through the whole landing but stopped just 60 miles short of the surface — Apollo 11 proved that astronauts could move and work on the Moon with at least some level of comfort and ease. This oepened the door for more demanding surface activities on later missions, which NASA took advantage of. Every mission stayed on the Moon longer than the one before it and each crew covered more distance than their predecessors.

Apollo 11 may be the standout mission of the lunar landing program, but its greatest contribution might be that it opened the door for the science heavy flights that followed.

_Want to relive Apollo 11 in “real” time? I’ll be doing another live tweet of the mission starting next week! Things will really kick off with launch on July 16 at 9:32 AM EST, but leading up to the big day I’ll keep posting fun pre-launch pictures and tweeting about the odd pre-launch event. Follow me @astVintageSpace and the hashtag #Apollo11! _