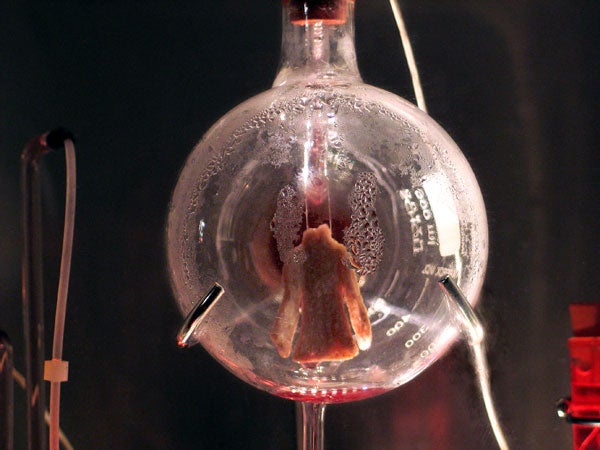 The Museum of Modern Art in New York has had to kill one of the works currently on display in its recent Design and the Elastic mind show. Literally. The piece is called Victimless Leather. It’s an incubator built from a series of flasks which provides nutrients to feed a miniature living coat. The tiny coat was comprised of a biodegradable polymer matrix in the shape of a doll’s jacket covered in a layer of living tissue made up of mouse stem cells. When the cells began growing to quickly, the curators of the show had to cut off the nutrients–effectively killing the cells. The artists couldn’t be happier.

The idea, of course, was to question our understanding of what is alive and what our responsibility is “towards the living systems that we engage in manipulating,” says one of the artists, Oron Catts.

Catts is the director of a group called SymbioticA, that operates out of the University of Western Australia. They are an interdisciplinary artistic laboratory at the school that aims to present scientific research through artistic inquiry.

The piece is part of a larger series called The Tissue Culture and Art Project undertaken by the group since 1996. In it, they strive to blur the lines between what most of us consider to be living and what science considers to be living. Past exhibits have included the NoArk, a play on Noah’s Ark consisting of transparent cases filled with unclassifiable blobs of tissue from various laboratories and tissue banks; Worry Dolls made from living and synthetic materials; and Disembodied Cuisine, which grew animal skeletal muscle over biopolymer in order to create an edible “steak” from an animal not yet born.