When Will Baseball Tame Broken Bats?

Recent incidents have re-sparked the debate over how to control a dangerous problem. Which wood makes for the most durable bat? 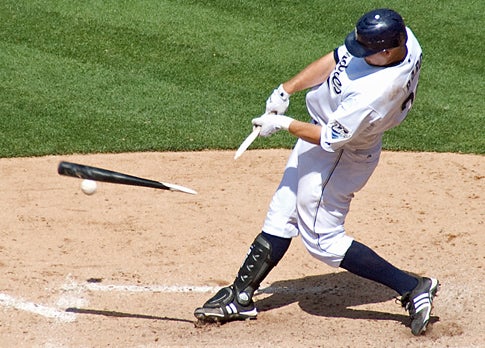 Pop quiz: What kind of wood are baseball bats made of? Until about 1999 the correct answer would’ve been ash. But long before pundits noticed Barry Bonds’ head inflating from steroids, players spotted his maple bat. In a sport where adults inject their own buttocks for a chance at glory, switching to a different bat caught on quick.

But what players didn’t realize was that while ash bats might crack, maple has a tendency to snap sending splintered projectiles into the infield, the stands and the dugout. And snap is what it did last month when a chunk flew into a dugout and pierced the cheek of Pirates’ hitting coach Don Long.

Commissioner Bud Selig said that “very premature” discussions about the bats occurred last week at the owners’ meetings in Milwaukee, adding that “It’s been a source of concern for me.”

Because it’s not like MLB didn’t notice that its most notorious star had started a trend nearly a decade ago (make that two trends). On the contrary, in 2005 baseball was concerned enough about potential performance benefits of maple that they commissioned Jim Sherwood, the director of the Baseball Research Center at the University of Massachusetts-Lowell to quantify the advantage. Sherwood used a high speed potato gun that fires balls at up to 200 mph into hanging bats to quantify the difference—or lack thereof (see more details on the testing here).

“We found that the batted-ball speeds were essentially the same for the two woods,” Sherwood said. “Maple has no advantage in getting a longer hit over an ash bat.”

Sherwood, who refused further comment on the issue, did observe that maple had a tendency to snap in a fashion Don Long is all too familiar with. In 2006 MLB even discussed the issue during collective-bargaining negotiations but couldn’t agree on a solution. Perhaps a performance benefit would’ve warranted immediate action, but firing shrapnel across the diamond could apparently wait.

SamBat, who provided Bonds with his record breaking bats isn’t exactly advertising the deficiency. Their website refers to maple bats as “a superb instrument that transfers more of your power to the ball, will last longer, and rarely dents.” Rarely dents? Seriously?

“When fans see a bat explode, that’s always a maple bat,” said Bynum. “Maple fatigues catastrophically. If you see a player tapping the bat because something sounds different, that’s a broken ash bat.”

While Bynum noted that 60% of players prefer maple over ash, Lousiville’s internal data is consistent with Sherwood’s regarding ball exit speed. He also added that they have no data suggesting that maple bats will last any longer than ash.

So then why are so many ballplayers sticking with maple?

“A lot baseball players go off the way the impact sounds to decide whether it’s a good bat or not,” said Bynum. “Baseball players are strange. The way that it cracks off the bat affects their thoughts.”

Bynum also noted that the grain in maple is much less visible creating a smoother more visually appealing piece of lumber. Maple has the potential for a higher modulus of elasticity according to Bynum and data from the department of forestry, but the expected ranges for both woods overlap. Their densities are nearly identical and lower than that of harder woods which would weigh too much for practical usage.

So while baseball appeases its players’ finicky nature, spectators who bring a glove to the game might want to shift their focus from the ball to the bat. Baseball won’t allow the manufacturers to impregnate or reinforce the wood to reduce breakages. A total ban seems highly unlikely and protective netting was scoffed at previously by MLB. Increasing the handle thickness to reduce snapping is the most likely option, but Bynum is pessimistic about its potential.

“It may help some. I don’t know. I think that’s sort of knee jerk reaction,” said Bynum. “Most the time they break it’s because they hit it off the end of the bat or they get jammed and it hits off the handle. In those cases it doesn’t matter how thick the handle is, it’s going to break the bat.”

Anything definitive will require an agreement with the player’s association. Those casually familiar with the steroid debacle know how quickly those two groups take action. Let’s hope we won’t have to wait for congressional hearings on this mess.