The Week In Drones: Lollapalooza Lollygaggers, Archaeology Aids, And More 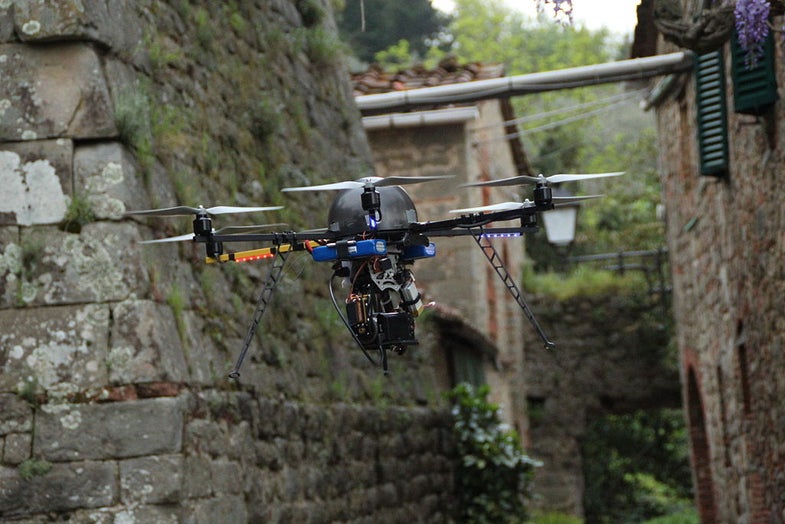 This drone is similar to that purchased by the San Jose Police Department, though it isn't the specific model. Adrian Michael, via Wikimedia Commons
SHARE

A drone was spotted in the skies above Chicago, specifically above the Lollapalooza music festival. The Federal Aviation Administration is looking into it. According to the drone’s pilot, the aircraft only flew to 230 feet in elevation, well below the 400-foot ceiling recommended for model airplanes. The FAA instead will investigate, not for the altitude, but for the danger of the setting: over a populated area.

Watch the drone’s footage, including a shout-out from Skrillex, below.

Tomorrow is National Model Airplane Day, sponsored by the Academy of Model Aeronautics (AMA). The day is designed to celebrate the hobby and its history. In support, the FAA released a statement on safety that strongly alludes to the criticism the FAA has received in its handling of drone regulations.

“Safe model aircraft operations bring the joy of recreational or hobby flying to more people than ever before,” said FAA Administrator Michael Huerta. “We commend AMA for its outstanding work. AMA’s detailed procedures promote safe model operations and serve as an excellent resource for AMA members and non-members alike.”

This quote is then followed by a link to the “Academy of Model Aeronautics National Model Aircraft Safety Code,” which emphasizes the 400 foot ceiling recommendation.

At the Farmfest tradeshow in Morgan, Minnesota, farmers were treated to a seminar on the agricultural benefits of drones, sponsored by none other than John Deere. Some of the low-hanging fruit in agricultural drone use is simple photography of farmland, allowing farmers to see anomalies in the land by the coloration of their plants. At a vineyard in California, the vintners found a section of grapes getting more water than they anticipated, allowing them to harvest that section sooner. Besides photography, there are other potential benefits from drone use. Sweetener company Stevia First plans to fly light-shining drones over their stevia crops at night, goading the plants into growing faster.

Protectors Of The Past

In Peru, a technology of the future can save the past from the pressures of the present. As people claim more and more land they encroach on unprotected historical sites. To balance the needs of the people today with a desire to preserve the past, archeologists with the Minister of Cultural Heritage are enlisting drones as a cheap and fast way to photograph the ruins, and a computer program stitches the images together into 3-D models of the sites. By knowing they’re there, it makes it that much easier to preserve the ruins for future generations.

Watch video of it below:

The San Jose police department acquired a drone in January and then kept it secret, according to recently released documents. While there are other police departments that fly drones, that drone use is subject to prior FAA approval. Previously hobbyists have disputed the FAA’s authority over private drone use, and it’s possible that the San Jose Police Department could challenge that ambiguity as well. It doesn’t look like that’s the case, however.

Weirder is that the grant to buy the drone came from the Department of Homeland Security, which means one part of the federal government funded the drone before another granted the police department approval to fly it.

San Jose Police Department’s own logic hinges on a semantic debate: According to a memo circulated among police in March, they reasoned “The UAV is not a drone. Drones are regulated by the FAA. The FAA doesn’t regulate our device.”