How North Dakota Plans To Become The Drone Capital Of America

We chat with Al Palmer, director for the Center for UAS Research, Education and Training at the University of North Dakota, about creating a drone-friendly state. 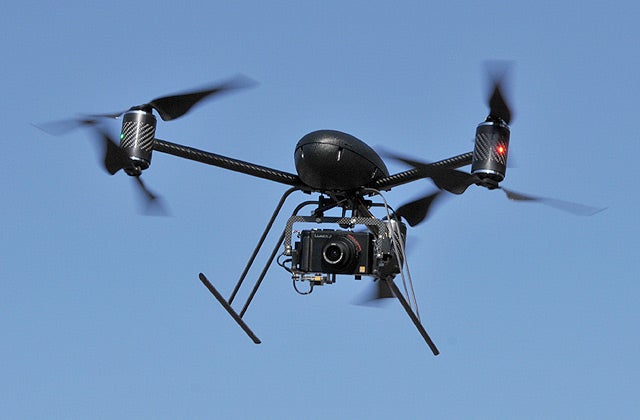 In 2015, the Federal Aviation Administration will admit military, private, and commercial drones into U.S. airspace. The move could dramatically increase the number of unmanned aircraft shooting through the skies, and with it, the value of the domestic drone economy. The Association of Unmanned Vehicle Systems International estimates that the new regulations will result in “100,000 jobs created and economic impact of $82 billion” by 2025. For several cities and states across the country, that means one thing: ka-ching.

Take North Dakota, where law enforcement, local government, federal agencies, and universities have already laid the groundwork for the coming drone-volution. The state has the nation’s first degree program in unmanned vehicles, at the University of North Dakota; an Air National Guard unit that switched from F-16 fighters to MQ-1 Predator drones a few years ago; and $5 million set aside for drone development if the FAA approves North Dakota as a drone test site. (Several U.S. regions are currently competing to be FAA-designated drone testing sites; six winners will be approved in December.)

To better grasp how the Roughrider state hopes to corner the market on drones, I sat down with Al Palmer, director for the University of North Dakota’s Center for UAS Research, Education and Training, at the 2013 Association for Unmanned Vehicle Systems International convention. Here is how North Dakota is trying to lead the nation in unmanned robots.

North Dakota is funding drone development and education on its own, thanks to a tremendous budget surplus ($2 billion predicted in 2013), largely from fracking and horizontal drilling.

Drones, despite their reputation as creepy spy bots, are just a subset of powered flying machines, and humans have been using those since 1903. When the University of North Dakota began its unmanned aviation degree program in 2009, it didn’t starting from scratch; the school drew experience from its airplanes program (which began in 1968) and helicopters program (which began in 1981).

The program trains pilots and gives students the skills to create drone-related startups. Field of View is one such startup. Founded by a UND graduate from the school’s Unmanned Aircraft Systems Center of Excellence, the company makes drone accessories for agricultural applications.

3. Give drones the dangerous jobs.

Crop dusters, who fly small propeller-powered planes over fields to spray them with pesticide, have the third-highest fatality rate among professions in the U.S., according to the Bureau of Labor Statistics. Palmer argues that we should give jobs like this to unmanned aircraft. “One day the crop duster is going to get up, fix his eggs and bacon and his toast and his coffee, and then go over to his computer and hit ‘L’ for launch,” Palmer says.

This kind of practical commercial application isn’t as exciting as drones that deliver pizza and wedding cakes, but it’s low-hanging fruit. Replacing a manned crop duster with an unmanned one that also collects data as it dusts allows small farmers to better use their land, Palmer says.

For places that lack police helicopters, small cheap drones offer law enforcement agencies an affordable eye in the sky. But convincing people to feel comfortable with cameras in the sky can be an uphill battle.

To help address this problem, North Dakota implemented an Unmanned Aircraft Systems Research Compliance Committee, which includes first responders, university community members, clergy, and city leadership. Every research project involving the university’s drones has to be vetted and approved by the committee. Right now, when law enforcement officials wants to use a drone, they launch the project with the university, if the committee approves. Palmer explains that while many people are comfortable using drones to monitor vehicle crashes, for search and rescue, and for event-specific traffic control, they don’t want drones used for police missions like tracking down bank robbers. Working with the community helps prepare the public for a future increasingly filled with flying robots.