Why Amazon’s Plan For Delivery Drones Isn’t Quite Realistic

Jeff Bezos says Amazon Prime Air could launch as early as 2015. He should aim for 2020. 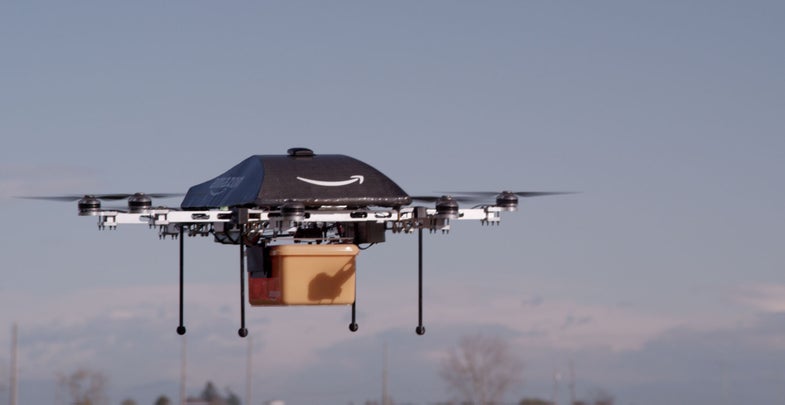 We’ve had a laugh at drone-delivery marketing gimmicks before, and Amazon Prime Air—announced yesterday during a flattering segment on 60 Minutes—may very well be more of the same. But that’s just for now. Drone-based package delivery could totally become reality in the next 10 years.

Here’s the primary reason for skepticism about Prime Air: Amazon CEO Jeff Bezos says drones could being delivering packages as early as 2015. Here’s how Amazon envisions those deliveries.

As my colleague Erik Sofge notes, if it exists in 2015, Amazon Prime Air will looking nothing like the promotional video. At best, says Sofge, this is what the 2015 delivery system will look like:

The primary limitation here is legal. Without special authorization from the Federal Aviation Administration, drones can only be used for commercial purposes so long as the pilot keeps the drone within eyesight. The FAA has a plan to change these rules, outlined in its recently published roadmap, but the agency is slow moving. Before Amazon distribution centers can send drones on deliveries, the FAA must figure out how to safely integrate all these new flying objects into U.S. airspace.

Drones will need to be able to safely plot a course that avoids collision.

That challenge will be met with new technology. Currently, airplanes and helicopters with onboard human pilots work with “see and avoid” rules, in which pilots see other vehicles and follow rules about right-of-way to avoid collisions. Drones lack onboard human eyeballs, so they need a different approach. The goal is “sense and avoid,” where drones can detect each other and other flying objects, be they airplanes, helicopters, or geese. Drones will need to be able to safely plot a course that avoids collision. This technology is very much still in development, but the FAA wants it ready to go before unleashing swarms of flying delivery robots on the skies.

According to the FAA roadmap, initial certification of sense-and-avoid drone systems is scheduled for between 2016 and 2020. Should the technology work by then, it’s entirely possible a future fleet of Amazon drones could carry packages directly to doorsteps.

If this is so far off in the future, why is Amazon talking about it now? The FAA is set to announce which six states it has selected as drone test sites at the end of 2013.

While drones have already proven their worth to small-town police departments and rural farmers, the prospect of overhead robots isn’t exactly appealing for some people, especially since most commercial and safety gains anticipated with drones come from their role as flying cameras.

Amazon Prime Air is a daring bid, and one that might finally help people distinguish between military Reaper drones and smaller drones like quadcopters. That change in perception is probably necessary for any future drone delivery operation, and while Bezos is almost certainly wrong about this working in 2015, it might very well be a reality by 2020.