How the decades-old concept of "crashworthiness" saves lives 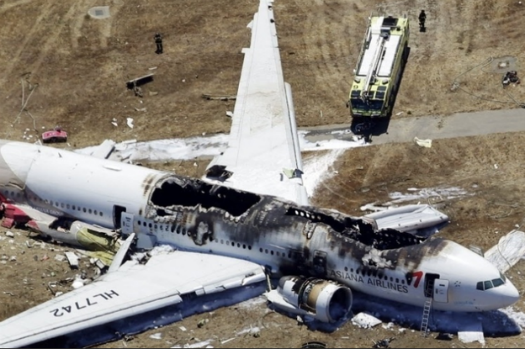 During the early days of flying, planes weren’t built to crash. They could fly, sure, but when something went wrong, there wasn’t much to protect a pilot or passengers from impending doom. In 1917, a young pilot named Hugh DeHaven, flying in his last training flight for the Canadian Royal Flying Corps, collided with another plane. He survived the 500-foot free fall to the ground, but the other plane’s pilot did not.

DeHaven would go on to study an idea he called “crashworthiness,” focusing on preventing injuries during crashes. He designed crash dummies and advocated for the efficacy of seat belts and making plane seats safer so that they wouldn’t impale their sitters upon impact, as historian Amy Gangloff writes in January’s Technology and Culture, a journal about the history of technology.

The idea of ‘crashworthiness’ is one of the main reasons so many people survived the crash of Asiana Airlines Flight 214. “When he retired in the mid-1950s accident prevention was accepted as quantifiable; there was deeper knowledge of the effects of crashes and collisions on the human body, and responsibility for product-related accidents was being redefined as shared by manufacturers and consumers,” Gangloff writes.

Partially because of researchers like DeHaven, plane safety has evolved extensively since the days when seats were barely screwed to the floor and made with plastics that gave off toxic gasses in a blaze. And DeHaven’s idea of “crashworthiness” is one of the main reasons so many people survived the crash of Asiana Airlines Flight 214 in San Francisco July 6. 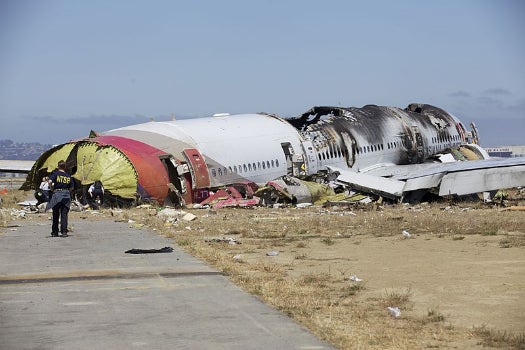 “The triple-seven that crashed [Saturday]-that airplane is a very, very sturdy airplane. It’s overbuilt,” says Bill Waldock, a professor of safety science at Embry-Riddle Aeronautical University in Arizona. “Boeing in that particular design incorporated a lot of reinforcements that went beyond the [safety] minimums.” Those reinforcements, including in the seats and floors, make the plane a little bit heavier, but make it better able to withstand impact.

Stapp strapped himself into rocket sleds and carried out experiments on his body’s ability to withstand deceleration, though he broke a few bones in the process.In order to get people out of the plane on Saturday, flight crew reportedly had to slice off some passengers’ seat belts with knives. While advocating for a “standing room” section on his planes, Michael O’Leary, CEO of super economy carrier Ryanair, suggested last year that seat belts on a plane are pretty useless, anyway. After all–how’s a little piece of fabric going to save you when your plane crashes into the ground at a couple hundred miles an hour? But the thing is, the seat itself–and staying in it–is actually fairly vital when it comes to crashworthiness. Commercial aircraft seats, like those on the Boeing 777, are designed to absorb impact in the event of a crash.

Much of what we know about how the human body can best withstand impact comes from Col. John Stapp, an Army medical officer who in 1945 volunteered himself as a “human decelerator” for the War Department’s investigation into how they could make sure more pilots survived air crashes. In the deserts of California and New Mexico throughout the late ’40s and ’50s, Stapp strapped himself into rocket sleds and carried out a series of experiments on his own body’s ability to withstand deceleration. In his last run, he endured more than 40Gs of force, a human record, though he broke a few bones in the process. His research ultimately led to better crash safety in both planes and cars, though his determination that the optimum plane crash protection would come from a backward-facing seat didn’t seem to take hold, possibly just because that seems weird to us. 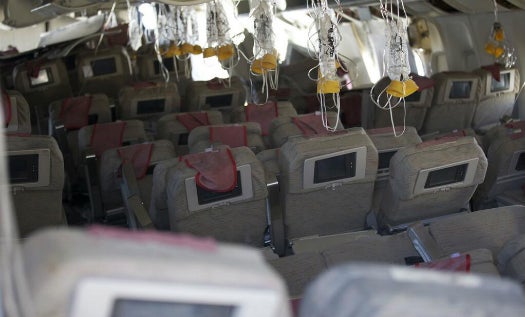 As Col. Stapp proved, the human body can withstand about 40Gs when restrained properly. You might break your tailbone with that kind of impact, even with the added protection of a seat. “If you think about the force of that freight train slamming down onto the concrete, the end result is a broken tailbone for most of the passengers,” says Kevin Kuhlmann, a professor of aviation and aerospace science at the Metropolitan State University of Denver. “From the pilot point of view, the seats are specifically designed to crunch down like an accordion to dissipate some of the energy.” While the passengers seats are designed a little differently, he says, they have a similar framework. Commercial airline seats are designed to withstand up to 16Gs without breaking.

Fire And The 90-Second Rule

In many cases, impact is only part of the danger. Fire is a huge concern, too. Jet fuel is slightly less flammable than gasoline, as its made mostly of kerosene, a fuel with a higher flash point (the lowest temperature it can ignite at). Flame-retardant materials in the walls, seats and carpet help slow fires down, and when fires do break out, newer materials don’t release the toxic gasses that were present in the seats of planes decades ago. Floor lighting, which the FAA determined improves evacuation times by 20 percent, helps guide people out when the cabin fills with smoke.

Starting in 1967, federal regulations began requiring that airplanes with more than a 44-passenger capacity demonstrate that in the event of an emergency, all passengers and crew can be evacuated in 90 seconds or less–even if half the exits are blocked, as was the case here.

Both the aircraft manufacturer and the airlines themselves undergo testing to make sure they meet the 90-second standard. In the case of the Asiana crash, two of the emergency exit slides inflated into the aircraft, rather than outside of it, trapping two flight attendants before the slides could be deflated by axes. (USA Today has a great infographic of the plane’s layout.) Wonder why the emergency exit slides, which can also be used as lifeboats, aren’t yellow anymore? They have an aluminized coating to protect them from the radiant heat of a nearby fire, so they don’t burst, as occurred in a fatal 1978 plane accident in Los Angeles. 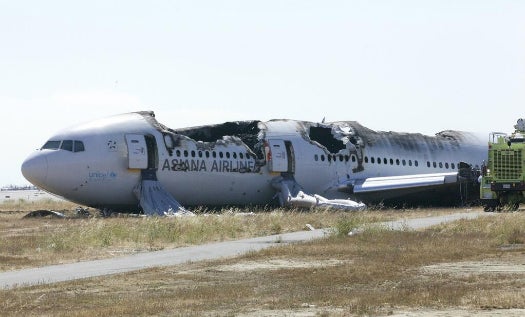 Though the slides didn’t inflate without incident, the Boeing 777’s doors are designed to open more easily than past models, which may have saved time in evacuation. They slide forward and away from the opening, making them easier to use than the pressure plug doors on models like the Boeing 737, which require you to pull the door slightly inward to open them. “These newer door systems work pretty well–the slides inflate a little bit faster,” Waldock explains.

In the aftermath of the crash, the National Transportation Safety Board will be investigating the potential that seats on the Boeing 777 came loose during the crash, as well as why some slides opened incorrectly, according to The New York Times. Due to the ongoing investigation, Boeing declined to comment on any of the safety designs on its planes. European aircraft manufacturer Airbus likewise declined to discuss its safety design in light of the investigation.