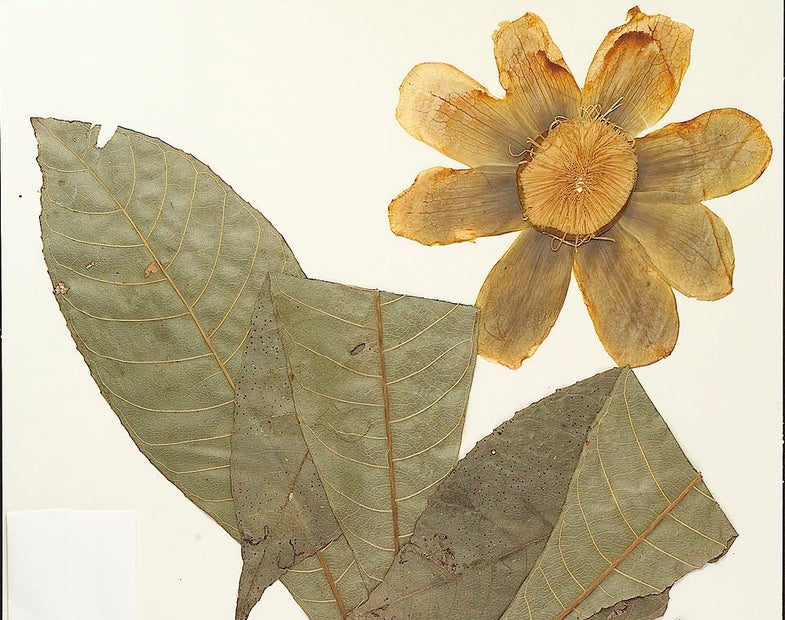 There’s a trove of biodiversity information out there, but much of it is locked in natural history collections. To make all this plant data more accessible, the New York Botanical Garden—one of the four largest herbariums in the world—is turning its more than 7.3 million specimens into a browsable digital database.

NYBG’s herbarium opened its doors around 1900, and from day one, collectors and other private herbaria had already brought in more than 100,000 specimens. New collections continue to come in each year, and curators also go out into the field to collect specimens from around the world. Inside steel cabinets, in a climate-controlled rooms on each of the five floors of the herbarium are specimens that hold interesting looks into plants’ pasts. Notably, the collection even includes fungi gathered by George Washington Carver and a moss specimen from Charles Darwin.

The collection includes a moss specimen from Charles Darwin.

The digitizing project began in the mid 1990s, and since then, the technique has been refined, and as a result sped up significantly. In the beginning, large studio set ups with big lights and a camera helped capture the specimen images. Now, NYBG uses a light box that was originally designed for photographing jewelry. The box has even, standardized lighting, and feeds the image data directly to a computer. When the team began this project more than 10 years ago, they were digitizing about 20,000 to 30,000 specimens per year. With upgraded technology and increased man power, they can capture more than 100,000 per year. This fall, the team digitized their two-millionth specimen.

“Prior to the last year and a half or so, we would have someone sitting at a computer to capture by hand the specimen data from the labels,” Kimberly Watson, NYBG information manager for digitization tells Popular Science. “Now, we’re able to take photographs and process the data through optical character recognition software.”

Many of NYBG’s specimens are pressed plants, which are glued to standard-size sheets and stored in archival conditions. In addition to vascular plants, there are also a panacea of fungi, algae, and lichen. And while the botanical garden may get requests for certain specimens to be digitized—which it honors—the team tends to digitize the specimens as projects.

“We do a lot of imaging on demand now,” says Barbara Thiers, director of the William and Lynda Steere Herbarium at NYBG. “We must get a request per week for online data. We got lots of feedback about the project, though after a while people don’t tell you on a regular basis. But we know it’s being used.”

The National Science Foundation has been funding efforts for digitizing natural science collections for years—NYBG in particular has received continuous funding since 1997. NSF has brought many of these institutions to work together around specific digitizing projects, and for workshops to share best practices.

While the digital herbarium may not be enough for researchers who require physical samples, or DNA from the specimens, the online database could further research in new ways.

“As it turns out, there are a lot of possible uses for the data we didn’t necessarily envision when we started,” Thiers says. Because the specimen data includes when and where it was collected, researchers can begin to use that data to see how plants have changed over the last 150 years, and layer that information with other datasets such as rainfall, soil chemistry, hydrology, and other factors critical for plants to grow.

Check out a just a few of the 2 million (and counting!) digitized specimens in the gallery. 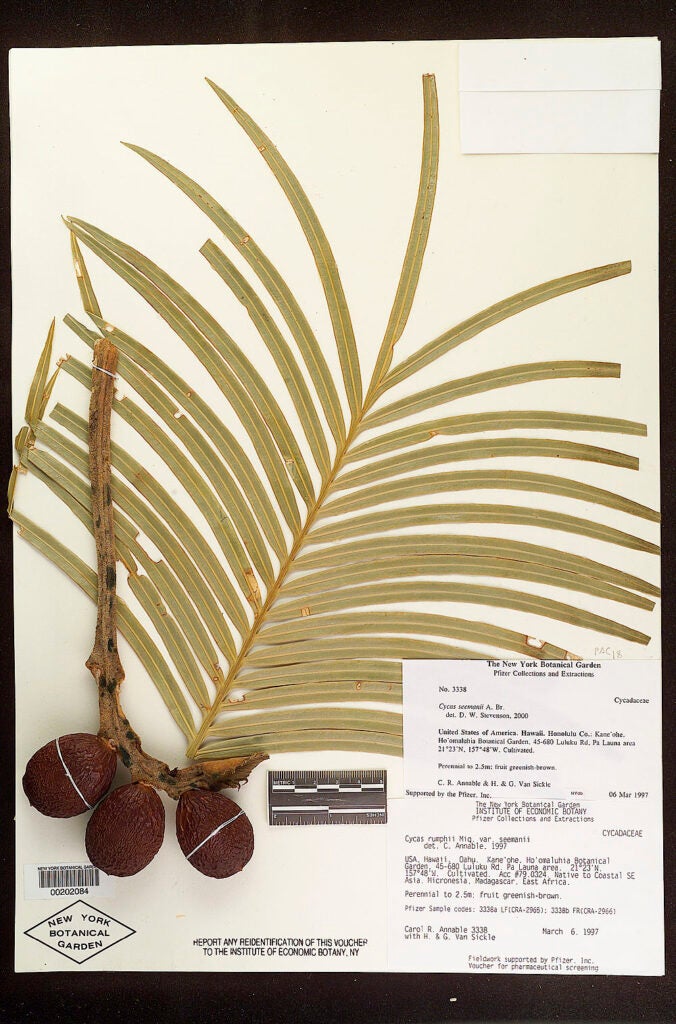 Cycas seemannii is listed as vulnerable on the IUCN Red List. According to IUCN, its habitat is declining due to agriculture in the area, and its use as a landscape plant. This particular specimen was collected in 1997 in Hawaii. 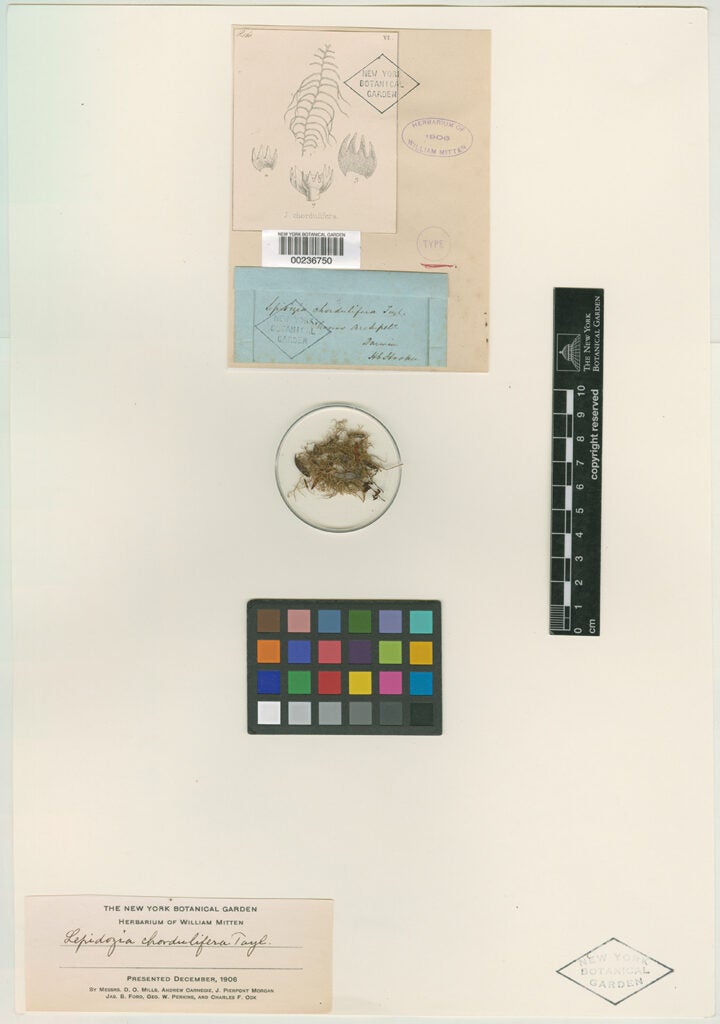 This moss sample was collected by Charles Darwin in Chile. While the moss itself doesn’t look too spectacular, the hand-drawn illustrations (and historical context) make this one pretty neat. 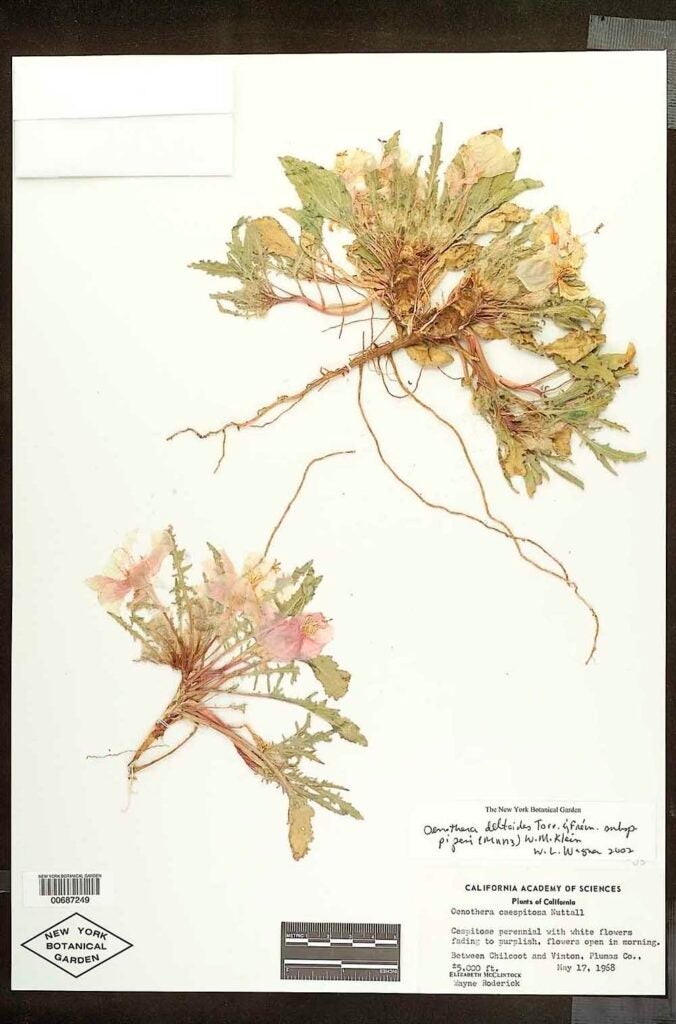 Oenothera deltoides is a species of evening primrose also known as a birdcage or basket evening primrose. It also has other cool names such as lion in a cage, or devil’s lantern. This specimen was collected in the morning, when its flowers are open. 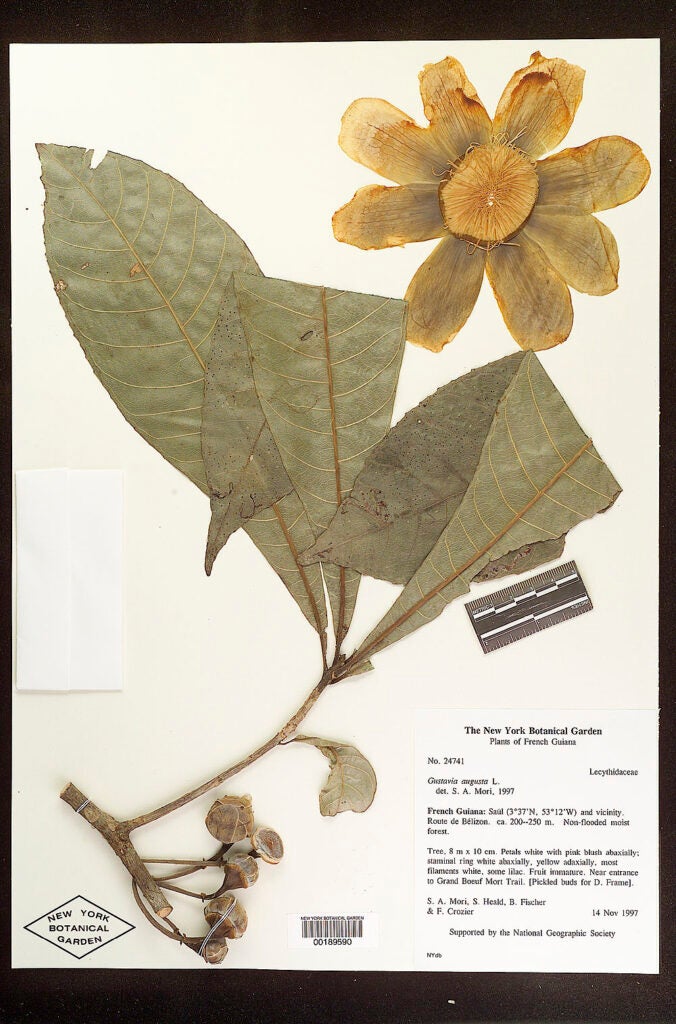 Gustavia augusta L. looks pretty nice as a dried specimen, but this tree’s flowers look even more beautiful when alive. 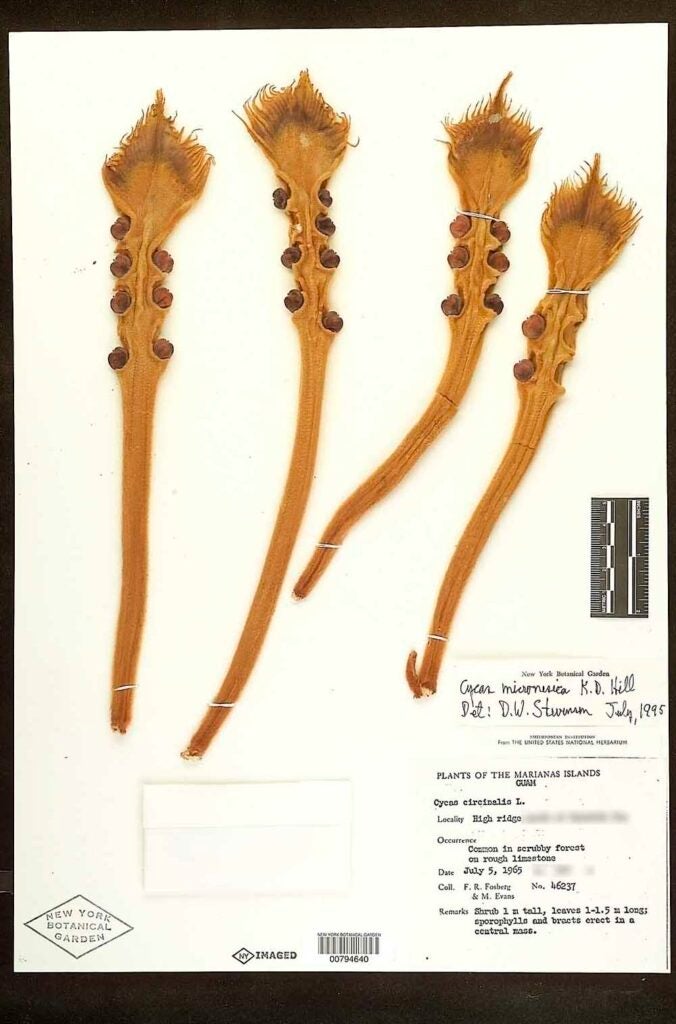 This specimen, which was collected in 1965, may look like strange alien spores, but it’s actually an endangered plant species. Its population is declining rapidly, in part due to development of its habitat. 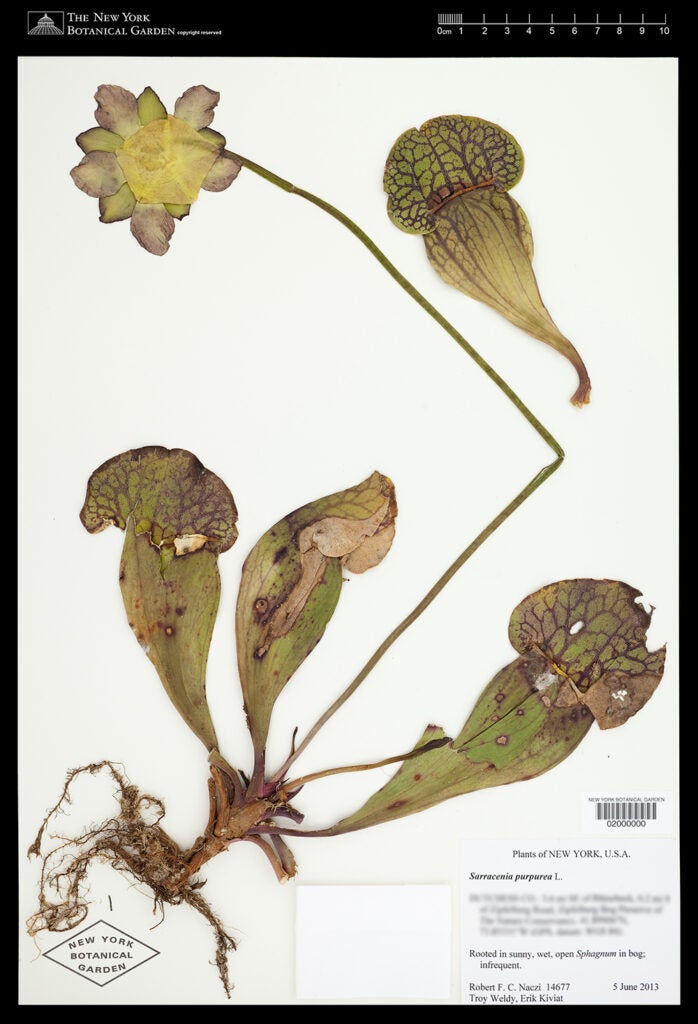 This fantastic-looking flower is special for NYBG—it was the two-millionth specimen digitized. It’s commonly known as the purple pitcher plant (great alliteration) and was collected in Duchess County, New York. 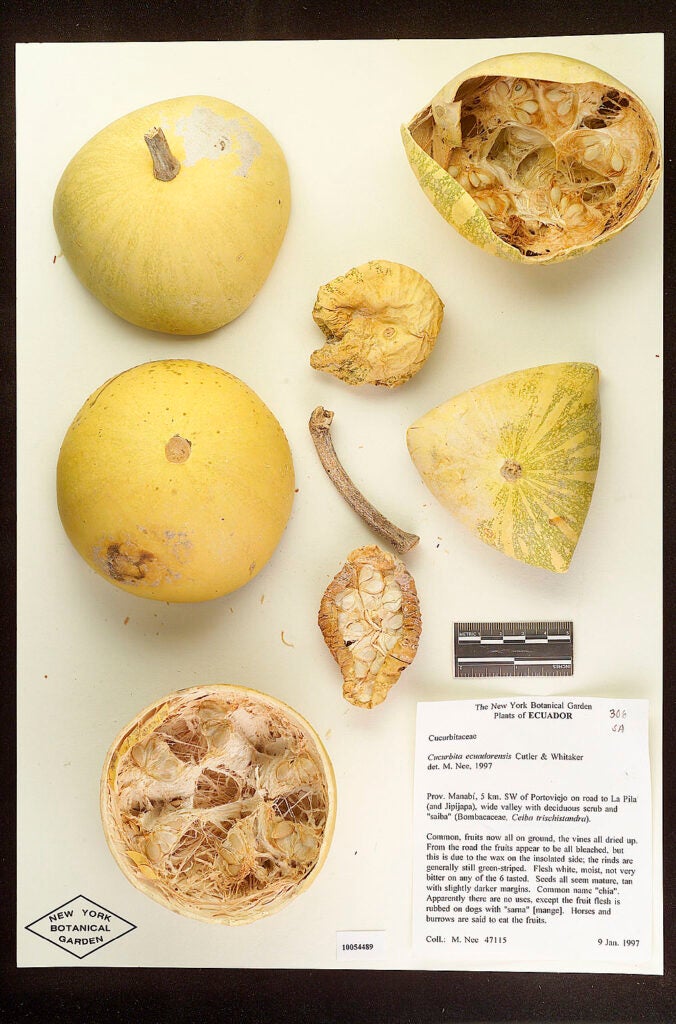 Cucurbita ecuadorensis H. C. Cutler & Whitaker is a species of squash that was found in Ecuador. According to the description, it is commonly rubbed on dogs that have mange.
digitization
plants