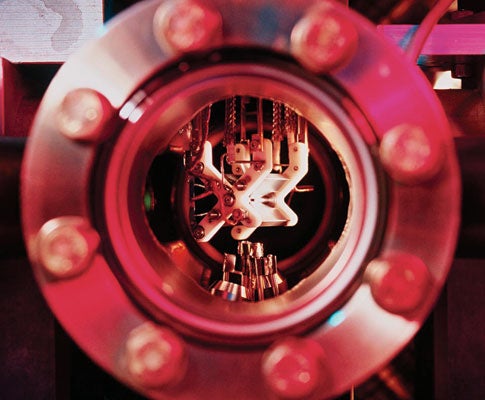 Apparently, a few people at the U.S. Air Force Research Laboratory forgot to turn on their crackpot detectors. The lab-commissioned “Teleportation Physics Study,” which was recently released on the Federation of American Scientists Web site, makes for some of the most inane and entertaining
science reading of the year. Although scientists have only just teleported the properties of an atom, the author of the report, Eric W. Davis, a physicist affiliated with a company called Warp Drive Metrics, writes as if the technology for moving people is already here. For example: “We can now build a wormhole-stargate. . . . This means that a traveler encountering and going through such a wormhole will feel no tidal gravitational forces and see no exotic matter-energy. . . . A traveler stepping through the throat will simply be teleported into the other remote spacetime region or another universe (note: the Einstein equation does not fix the spacetime topology, so it is possible that wormholes are inter-universe as well as intra-universe tunnels).”

Clearly, this wormhole-stargate would be immensely useful: “Future space explorers and their equipment will need to easily and quickly travel from an orbiting spacecraft to the surface of some remote planet in order to get their work done, or military personnel in the United States need to easily and quickly travel from their military base to another remote location on Earth in order to participate in a military operation, or space colonists will need quick transport to get from Earth to their new home planet.”

One of the stranger qualities of the paper is that the same concept seems realistic on one page and distant on the next. From another part of the report: “There are a lot of important little details that were left out of the teleportation process because we simply do
not know what they are. This technology does not yet exist.”

Oh, those important little details. They always seem to get in the way of potentially revolutionary technologies. Still, despite the very large hurdles, the author–who is something of a mystery himself, as his company, Warp Drive Metrics, is not actually registered as a business in Nevada, and he has not returned phone calls or e-mails from Popular Science–recommends spending $7.5 million for further study. Air Force Research Laboratory spokesman Ranney Adams says there are no plans to take his advice.