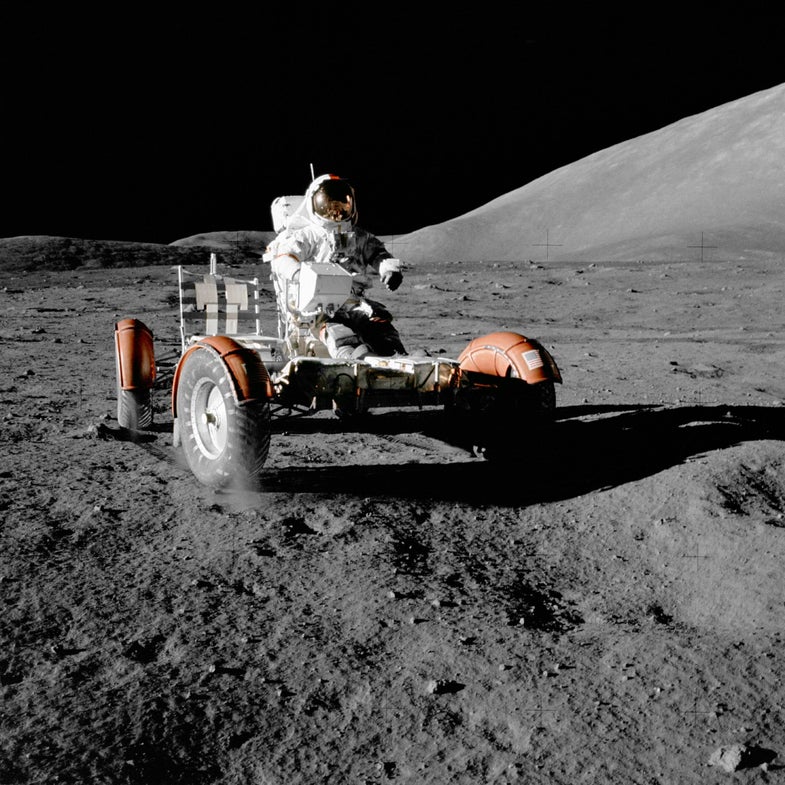 PartTimeScientists is hoping their moon rovers will get a good look at the lunar buggy left behind by the Apollo 17 crew. NASA
SHARE

The Apollo 17 landing site has been abandoned since the last lunar astronauts went home in 1972. Now the site could get its first visitor in 44 years, as private companies race to the moon in the Google Lunar Xprize competition. A German team known as the PartTimeScientists plans to send its rovers to the Apollo 17 landing site and examine the moon buggy left behind by astronauts Gene Cernan and Harrison Schmitt.

PartTimeScientists is the fourth team to book a flight to the moon. A rocket rideshare company called Spaceflight Inc. is handling the launch contract. Exactly which rocket it will ride on (and when) is still up in the air.

$30 million is up for grabs in the competition, in which teams are tasked with landing a spacecraft on the moon and traveling 500 meters over the surface (then sending high definition images back to Earth). And they have to get it all done by the end of 2017. The German team will get extra points if they manage to make it to the Apollo 17 site.

The team’s current plan is to set its Autonomous Landing and Navigation Module within two to four miles of the 1972 landing site. Then it will deploy two rovers to get a closer look—but not too close. In accordance with NASA preservation guidelines, the rovers will keep a safe distance of at least 200 meters from the historic site.

High-definition camera equipment on the rovers may reveal how the abandoned buggy has held up under four decades of extreme temperatures and intense radiation.

“Has it been ripped to shreds by micrometeorids, or is it still standing there like on the day they left?” Karsen Becker, the team’s rover driver, told New Scientist.

Their findings could provide important feedback for scientists and entrepreneurs who hope to build a permanent research base on the moon.

[Via New Scientist and Space.com]