Wherever conquerors go, they leave a little bit of their genetics. Gene analyses of modern people are able to reveal those influences.

Violence and love, conquest and assimilation, they’re all in your DNA. Literally. As human populations have moved around the world, they’ve left bits of their genes to mark their passage.

We’ve reported on this before, as scientists have used genes to trace immigrations in the Caribbean and the Indian subcontinent. Now, an ambitious new project has attempted to use genetics to identify many of the major movements of humans over the last 4,000 years. No problem, right?

By measuring the sizes of different chunks of DNA in modern people, a team of geneticists and statisticians from the U.K. and Germany identified more than 100 major population movements. They saw the spread of Mongol genes across the Mongol empire, the appearance of European genes in Maya and Pima Indians during colonization, and the arrival of Cambodian genes at the fall of the Khmer empire. The scientists also made an interactive map where you can explore the ancestry of people around the world. The scientists never needed to consult historians to find evidence of these historical events, which is pretty cool. 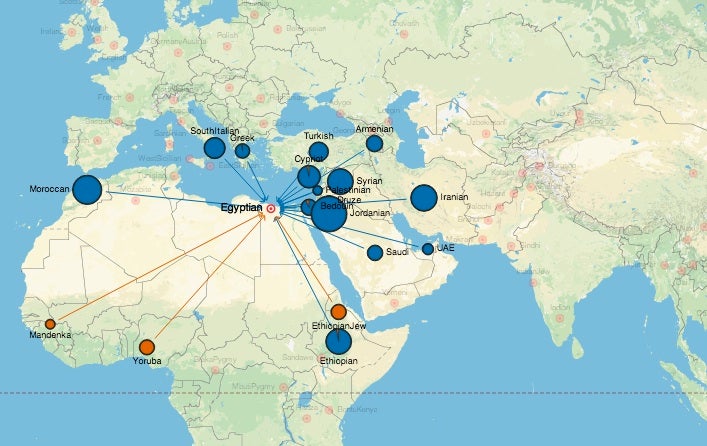 My favorite part of these kinds of studies is thinking about how genes get into populations. These gene movements are all stories about sex, whether people fell in love when they met these different-looking strangers—or whether soldiers and settlers raped those they come to conquer. Each gene movement is a hint of some of the biggest moments in ordinary people’s lives.