Designed by engineering students, the GROVER is about to start starting exploring the wilds of Greenland. 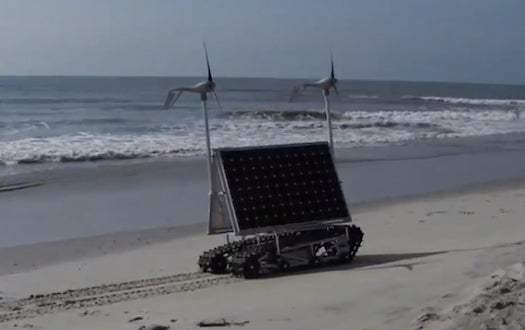 Last year, satellite data showed 97 percent of Greenland’s surface ice had turned to slush in unseasonably warm weather. NASA wants to study phenomena like that to learn more about why it’s happening and the rate at which it’s happening, but using satellites or radar-equipped planes can be costly.

So this is the alternative: GROVER, an engineering student-designed, lumbering, solar-powered ‘bot that will soon roll across Greenland to collect data on the changing ice sheet. The rover was built by groups of students at a Goddard engineering boot camp. They approached Goddard glaciologist Lora Koenig about building a rover to monitor Greenland’s ice sheets, and Koenig agreed to help, eventually becoming the team’s science adviser.

Short for Greenland Rover and Goddard Remotely Operated Vehicle for Exploration and Research, GROVER has a ground-penetrating radar system on board that can monitor how snow is accumulating (or not), and do it cheaper than satellites or planes. It’ll go on a test run starting tomorrow, and stay there until June, autonomously picking up data for glaciologists.

At 6-feet tall (with huge solar panels mounted on tank-like treads) and about 800 pounds, GROVER isn’t the sleekest rover, but it’ll roll along at 1.2 miles per hour with a constant stream of Arctic summer light, allowing it to move around the clock. And if it gets lonely, NASA plans on sending another rover next month, Cool Robot, to help out.