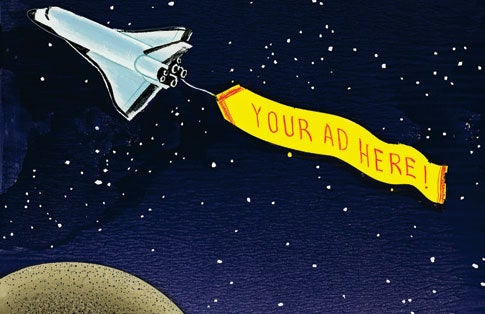 Is there anybody out there?

Convinced that no one on Earth will buy your musty old futon? Feeling alone in the universe? Why not try
hitting up an alien civilization to assuage your Earthly woes! Two privately owned satellite companies–Deep Space Communications Network (DSCN) in Cape Canaveral, Florida, and TalkToAliens.com in central Connecticut–are spearheading the civilian data race into space. The inaugural transmission involved beaming reams of Craigslist.com’s want ads to the awaiting heavens.

To test the market for its technology, DSCN held an eBay auction in February for its first satellite transmission into deep space. Craigslist CEO Jim Buckmaster placed the winning bid of $1,225, then handed the reins to the global Craigslist community. The free online message board, which hosts more than five million postings a month, provides a forum for roommate searches, dating ads and, yes, a place to flog your old couch. For several months, a check box on the posting forms allowed users to indicate whether they wanted their message sent into space.

Although Buckmaster’s bid secured airtime for only 75 words and five pictures or five minutes of video, Craigslist negotiated for a higher volume after the site received more than 10,000 space-bound postings within the first 24 hours. By early March, Craigslist had more than 24 million words and pictures flagged for transmission.

On March 11, broadcasting at a frequency of 5.945 gigahertz, DSCN sent
a 23-minute transmission into space. More than 138,000 postings were sent during this session; the second and final transmission was scheduled for mid-May, to correspond with NASA’s launch of the space shuttle Discovery.

With Craigslist footing the bill through May, faithful message posters could scour the cosmos for everything from green alien girlfriends to Cubs–White Sox tickets to undiscovered worlds up for grabs (“I claim your planet in the name of Earth. Surrender or die,” wrote one jokester). Visitors to Slashdot.com suggested other creative postings, begging for “a ride off this rock” (“Ecosystem failing . . . pick up at Long. 118.20193, Lat 33.85908, Earth”) and parodying dubious real-estate postings: “For sale: **Diamond in the rough.** Third planet from Sun . . . Good starter planet for young, carbon-based species . . . Small hole in ozone layer. Aboriginal biped humanoid species infestation can easily be removed with genetically engineered plague or runaway nanotech ‘accident.’ “

If you missed out on this collaborative message in a bottle, private ventures are now providing the service to individuals as well. DSCN will soon accept text, with either five pictures or five-minute video messages for $99 and will include a certificate confirming broadcast specifics such as to where and at what time the transmission went out. And TalkToAliens.com,
a service founded by members of the Civilian Space eXploration Team–a group that, last May, sent the first civilian amateur rocket into space–currently sends e-mails ($20) and real-time phone transmissions ($4 per minute) into deep space. The company is developing ways to send videos,
pictures and instant messages.

TalkToAliens.com messages are broadcast at 2.43211 gigahertz, a similar frequency to that used by cordless phones and wireless networks. “It is commonly used on Earth, so if any intergalactic entity is already listening in, they should be aware of this portion of the spectrum,” says company president Eric Knight. But unlike your cellphone, which broadcasts at low power and in all directions, TalkToAliens.com beams messages in a tightly focused beam directly to the core of the Milky Way. Focusing the beam greatly enhances the distance it can travel and still maintain a decent signal strength, increasing the chances that a faraway civilization might be able to pick it up.

Despite the jokes and criticism–some fear that the radio pollution and intergalactic spam might anger other, possibly belligerent, civilizations–both Knight of TalkToAliens.com and DSCN president Jim Lewis say they believe there is a possibility of reaching other planets populated with intelligent life. “If you consider all the organizations
we have on Earth monitoring 24 hours a day for other life-forms,” Lewis says, naming the SETI Institute in California, the Arecibo Observatory in Puerto Rico, and the Parkes Radio Telescope in Australia, “isn’t it logical that other intelligent life-forms are doing the same?”

Feeling garrulous or have a velvet Elvis you simply must sell? Check out TalkToAliens.com or deepspacecom.net.