The Raider brings speed to the battlefield, proving that helicopters can be faster. 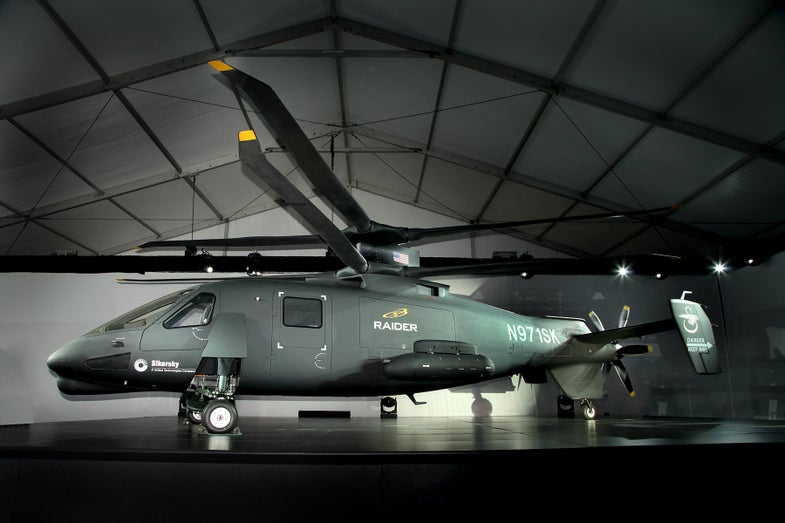 The Raider turns the standard helicopter’s normal balancing tail rotor perpendicular, making it a much faster pusher propeller. Rotors are great for maneuverability, and they allow for a much smaller landing surface than the runways required by fixed-wing planes, but helicopters often suffer from slow speed. The Raider features two rotors on top, spinning in opposite directions to counter each other’s torque, and the tail propeller provides forward momentum. With this set up, the X-2 set an unofficial helicopter speed record by flying 258 mph in 2010. The Raider is, by and large, the production version of the X-2, tweaked and armed for military customers.

The pusher propeller design also hearkens back to an even older design. In the late 1960s, Lockheed designed the AH-56 Cheyenne, a fast attack helicopter for the army with a pusher propeller. The Cheyenne was plagued by disagreement between the U.S. Army and U.S. Air Force over the respective roles of aircraft within each branch, and the Cheyenne was canceled over rising costs and stability issues.

Without the stubby wings of the Cheyenne, the Raider won’t face the same role confusion that plagued the Cheyenne, but it will match its speed. According to Sikorsky, the Raider can cruise at 253 mph. Sikorsky is marketing the Raider as a replacement for the OH-58 Kiowa Warrior, which tops out at about 110 mph when armed. In addition to two pilots, the Raider can carry up to six troops with gear inside, letting it both scout out enemy positions and then add troops to the fight. The troop capacity of the Raider is about half that of the Blackhawk, one of the Army’s main troop carriers, and a lot less than that of the shape-changing V-22 Osprey, but it falls nicely between them both in speed.

Should the Army choose to adopt the Raider, they’ll have a new, fast and flexible scout. For the rest of the world, the Raider shows that helicopters can be faster. Here’s hoping that becomes more permanent.